THE OSYX: BORN UNDER A GOOD OMEN

Posted on 11 January, 2020 by Andrew Darlington

Interview and album Review of:

(This Could Go Boom Records)
https://www.facebook.com/theosyxband/ 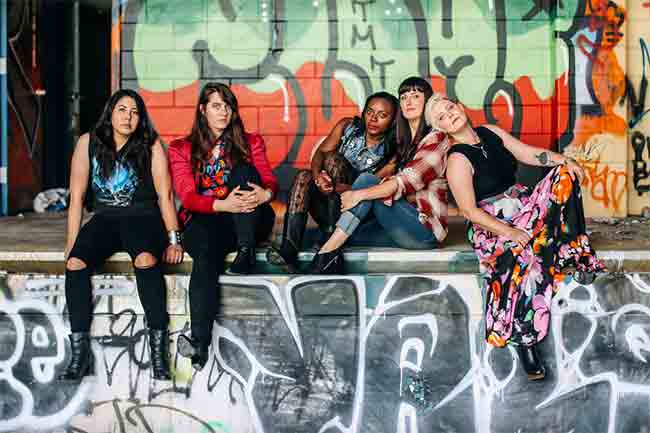 There was an advertising strapline that once claimed ‘Fanny Has Balls’. It was obviously anatomically incorrect. I blame the patriarchy.

Pronounced ‘Oh-Six’, The OSYX are a Washington DC five-piece ‘womxn collective’ whose debut album has seven tracks in an ascending order of Wow-factor. See them playing the hard garage-burn of the instrumental “Dog Fight” in the streetwise sunshine of the Lamont Park, as part of the ‘7DC Pop-Up Festival’, ridges of high-pressure guitar in a nervous excitement and an excited nervosity, stomping drum-kicks leading into a mid-point reflective break, before the fuzztones reignite. ‘Hoo-wee, it was hella hot that day!’ exclaims Ara Casey (guitar and vocals), ‘but yes, an excellent show. The band and label have worked with the Smithsonian several times now and every event is absolutely ace.’ Their next YouTube clip they’re employing their formidable Indier-than-thou three-guitar line-up caught in the ‘Rock And Roll Hotel’, trading raw curling licks that make the Wall-of-Death feel like a stroll in the Park, riffs too ugly to eat, too big to die. Theirs is a quick-witted jump-cut sensibility that keeps you intentionally off-balance.

Part-named for the legendary alpha-female wolf, they proclaim ‘the urgency of sunset in a post-apocalyptic world,’ with a post-Riot Grrrl gender-agenda. Among the quotes on their label press-sheet there’s one that inaccurately compares them to mainstream Rock bands Heart and Fanny. I don’t hear that. Hasn’t the writer heard female-fronted BritPop bands Sleeper or Echobelly? ‘Hey! Sleeper was one of my faves in college!’ protests Erin Frisby (guitar, vocals, banjo, keyboards, harmonica). She’s the ‘blonde’ in the ripped black fishnet tights? ‘Yep. That would be me, ha.’ Can I quote that ‘Yep’ in full? ‘Yes of course’ she concedes graciously.

The four stylised symbol-letters that form the album artwork design is by Selena Benally (guitar, vocals), one of the original three singer-songwriters – alongside Ara and Erin, who – each with their own separate music-projects, found creative strength in each other. They were joined by Maya Renfro (bass, violin), and by Robzie Trulove (drums). Hannah Sternberg also adds cello. Do they write together, or is there one or two designated writers? ‘Three of us contribute lyrics to this record. Some of them were written collaboratively and some were written in full by one band member,’ explains Erin evasively. Then elaborates, ‘we definitely all contribute heavily to shaping each song regardless of who brings in the original idea. Some of our songs have sprung out of jam sessions together.’

With the CD produced by Chris Stelloh at the Pointless Forest studio, vocals and violin recorded at Hilltop House courtesy of Adam Ortiz, the intention to start-up the crowd-funded label – ‘This Could Go Boom’, goes beyond merely promoting themselves, but also to disseminate the ‘unheard narratives and artistic voices of womxn and non-binary people.’ With Erin adding, ‘we really wanted to make sure that we start the foundation as mission-driven rather than profit-driven.’ With the long-term expectation that attitudes will change and ‘we’ll be completely unnecessary and that artistic expression, exploring these different experiences and different backgrounds, different genres of music, is gonna be so normalized that us existing just doesn’t need to happen anymore.’

‘We have a ton of influences between us, which I think helps keep the writing really interesting’ she goes on. ‘Selena and I are probably the most influenced by Riot Grrrl stuff. There were a lot of bands and musicians that lived in DC and moved to Olympia, WA. We also have a Girls Rock organization here that came out of that scene. So it’s super close to our hearts, pairing playing music with youth empowerment through music. Some of the bands I grew up on and loved are Sleater Kinney, which is a huge influence for me and for Selena, plus BratMobile, Bikini Kill, Team Dresch and L7. Other nineties musicians who were very influential for me include PJ Harvey, Magna POP, Rainer Maria, and Juliana Hatfield.’

Robzie adds. ‘It really has been quite an organic development to say the least. This scene is certainly worth studying in the future when all of this is just history. Because these kinds of projects just form out of authentic needs and desires and probably has a lot to do with the crap we face living right by that White House. We have to stay hopeful and positive despite all this, right?’

There’s back-and-front vocal interplay that pings like rubber balls over a hooky riff of “Diving Intervention” – a play on ‘Divine Intervention’, a seeming attack on the male god-figure, contrasted by the strength of female solidarity, parental or romantic. While I always thought that the kid’s prayer it quotes ‘if I die before I wake’ was a creepy thing to instil in young minds. Robzie jumps in, ‘I concur with you on the ‘creepy’ concept of a stalkerish male entity taking one’s soul should they die before they wake. That has literally ALWAYS bothered me. Like, is this ‘Lord’ fella just in a conceptual closet silently watching all of us? AND controlling our destinies, so to speak? Is he like the omnipotent R. Kelly? The proverbial concept of God is truly so wank.’

‘Yeah, lyrics are where it’s at for me too. And I really like your take on “Diving Intervention”,’ adds Ara. ‘It helps me look at the lyrics from a different seat in the room. As an artist the greatest thing you could wish for is for someone to hear their own story in the music you craft, so thanks for that. It almost becomes irrelevant as to the lyrics’ origin but since you asked… The words were an expression of my frustration with blind allegiance to religion, to the point of relinquishing free will and responsibility. If you survive by ‘the grace of god’ what of those forsaken by that god? At what point does giving credit to god undermine the miraculousness of humanity? I’m over-simplifying of course, but do we really think god gives a shit about football? C’mon. Employing the lullaby was a creepy way of hinting at how young we’re all indoctrinated. What you’re taught at a young age is hard to unlearn. Besides, Metallica used that mechanism so well in “Enter Sandman”…’

Then there’s the acoustic lead-in to the love-broken light and dark “Scavengers”, a hypnotic ode with violin riding the backbeat, rising through invisible barriers to a building crescendo. It’s a female-centric break-up song that hits so many sensitivities, universal… but also very personal. ‘Oh, I like that take!’ says Ara. ‘“Scavenger”s lyrics come from Selena. That song is so damn beautiful I can’t even begin.’ The greatness you find in each other could also be a reference to the band itself… ‘Actually I’d be the one to answer that question, especially because two of us are a couple now too.’ Hey, I do like a story with a happy ending.

Among the album’s other stand-out tracks, Punk-heavy with guitar spikes, ‘the things I’ve said, the things I’ve done and the people I’ve hurt, I carry it with me.’ Equal parts anguish and anger. And, perforating the atmosphere, “Six Feet Under” is a Climate Change warning. Ten Years Until The Earth Burns! I love that eco-political slant. So OSYX are with Greta Thunberg rather than Trump on this? ‘It’s official’ says Ara. ‘This is our first interview that mentions that orange dumpster fire!’ ‘We’re all just watching it happen aren’t we? “Six Feet Under” though,’ then Erin corrects, ‘but this isn’t actually an interview!’ Well… you could get quoted. And yes, we should all be involved.

Taking it down a speed-notch they do “Bi-Coastal” which asks a Folksong-knowing ‘where have all the fireflies gone? Gone to winters every one.’ And the shifting tectonics of the 6.08-minute “Bad Omen”, ‘born a wild thing’ rising into falsetto swoops and atmospheric howls.

‘Thanks for giving our album such an attentive ear’ says Robzie.

I’d trade in the entire Coldplay back-catalogue for this CD. ‘Glad you like the album. We’re pleased that our CD made it across the pond’ Ara concludes. ‘The album has yet to be reviewed outside of the US so yours would be the first on two fronts. We originally released the album on black vinyl with a limited run of turquoise-colour vinyl. So I actually keep forgetting you have the CD because we only got them recently ourselves.’

Sly & The Family Stone had a strapline that said ‘Inter-racial. Inter-gender. Into Drugs.’ Well, two out of three ain’t bad. ‘Listen To Womxn’. 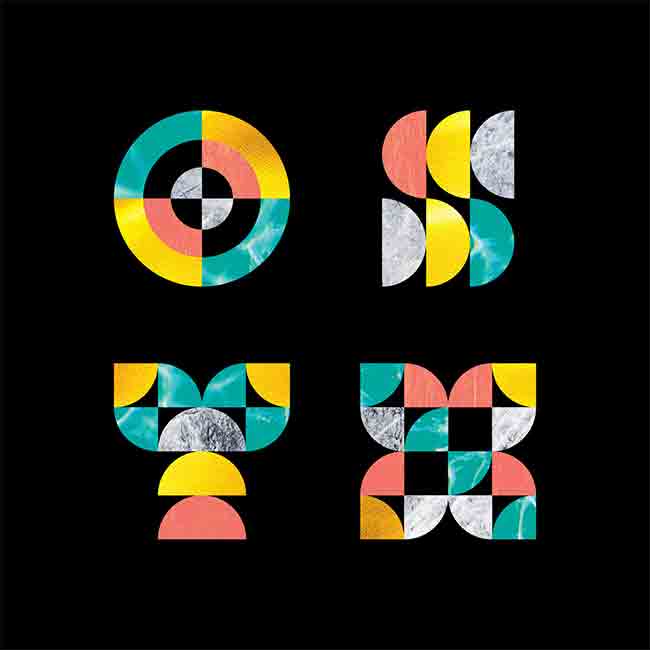 View all posts by Andrew →
This entry was posted on 11 January, 2020 in homepage and tagged Andrew Darlington. Bookmark the permalink.