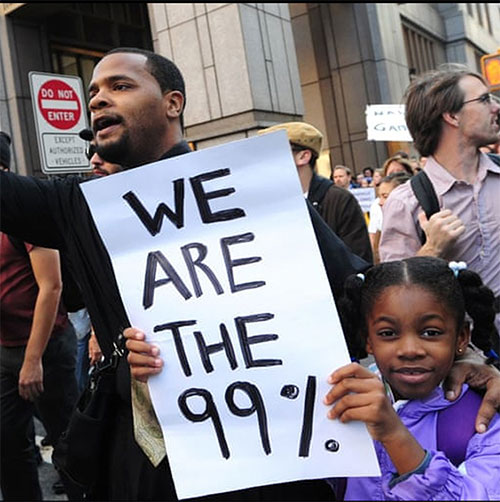 All traders know one thing – the price of something is only worth what someone is willing to pay for it. A bottle of water from a UK supermarket can be £0.12 but in the middle of a desert, you might give your life for one.

IT IS NOT NECESSARY FOR THE NEW PARALLEL NON-MONETARY ECONOMY TO REFORM THE MONETARY ECONOMY since it bypasses or invalidates many of its processes. But for this consideration it is useful to compare many of those processes that currently constitute a cost or loss to the economy, for the purpose which they were intended, or are embezzled for personal consumption and wealth. More than any previous period of history, neoliberal economics has necessitated not only non-monetary generation of value in the monetary economy, but has forced more unpaid labour and dispossession on the global population to survive than any previous economic crisis, within a world with access to unprecedented wealth. This is connected with, but vastly broader than, the formal capitalist generation of ‘surplus wealth’ from labour, which now has infinitesimal influence on the function of the global economy. But this reductive process along with other critical influences on commerce, including disasters, hides a gargantuan money / skill / income drain that practically amounts to a global parallel economy that is not accounted for in the monetary economy. An economy of loss and waste. If not made up of money, it is worth noting what factors this non-monetary economy consists of and its functions and value.

The Parallel Non-Monetary Economy has existed since the time exchanging things between various families and parties began. This document is particularly focussed on its application to capitalism; especially from the advent of neoliberal economic strategies and financialization, which were instrumental in the economic crises since 2008. That period and the realization of economic insecurity pro-actively sought to solidify power in the hands of the wealthiest elite, to use this process as a tool for boosting market control, political influence and the almost invisible (in legal terms) thievery and modern slavery that is promoted as wider access and engagement with the capitalist global economy and its benefactors. It is a calculated trade off and established strategy for achieving and sustaining any monopoly. Identifying the relevant parts of the hidden Parallel Non-Monetary Economy capitalists have exploited helps TO ILLUSTRATE HOW THIS LOST PROFIT – OR NON-MONETARY WEALTH – CAN BE APPROPRIATED IN FAVOUR OF EVERY LIVING INDIVIDUAL PERSON without generating any conflict with the monetary economy.

The accounting system that can turn unpaid, unvalued labour and lost revenue into a positive virtual NON-MONETARY economy is covered in the document – ‘Turning Costs To Earnings: How the Parallel Non-Monetary Economy Works.’ (links below).

For this discussion, the existing practical parallel non-monetary economy is constituted by both non-monetary activities as well as parts of the monetary economy that effectively result in non-monetary outcomes for the public economy, impossible to enumerate here, but the following are worthy examples. From micro to macro level, potential revenue is always lost and hardly ever considered or accounted for, but not entirely incalculable. Inordinate amounts of profits are lost by the corporate ownership model, in all sectors, paying people to do functions they have no personal interest in or accountability to, but multi-billion dollar corporations can generally afford it. Money that is embezzled for personal advantage, or to boost corporate profit, rarely lays idle. If profits are not generating value in shares and stock trading, or returning dividends to share-holders, they are usually affecting debt and interest rates, or invested in other commercial ventures, so in this way they are not an entire loss to the economy. BUT they are a significant loss to society at large for the benefit only of a minority. There is NO regional loyalty or national border, no moral ideology, when it comes to maximising profit, it is truly a global economy no longer made up of independent states; this shows the elite go wherever profit takes them; (arms trading and internal/external political destabilisation an example of calculated loss with diminishing return). If the 1% elite are the only ones with the power to control this runaway massively automated system, and don’t, they are controlled by it.

How do people marginalised by this economy, or completely outside of it, manage to survive? And how does a new PNME alleviate ALL of the above, including its externalities?

Comparing past, present and future PNME.

The Past/Present column lists evidences of the PNME we are already aware impose costs or have a REAL positive / negative effect on the market or its potential, but are not counted as part of the monetary economy except by economists who calculate “EXTERNALITIES,” even though they are intrinsic to all modern commerce and especially the economics of ‘austerity.’ Some of these factors ARE part of the monetary economy (if not deliberately hidden through various means), but are included here due to their reductive effect on the means of acquiring products and services and/or their effect on the POTENTIAL value (= reduction or loss) to the monetary market that would otherwise be contributory. The well-documented misappropriation of these legitimate legal aspects of the monetary system incur otherwise avoidable costs and hence WASTE or drain on the economy. Taxation is one example. Money that is effectively thrown away, diverted or practically becomes non-existent for its purpose.

The Future column shows how these aspects of the economy can be transformed into INTEGRAL economically positive contributing factors, within a new Parallel Non-Monetary Economy virtual accounting system, with direct real value to its contributors, CRUCIALLY ADDING the effect of that parallel economy to the monetary economy; (for example, saved monetary resources can be used to pay off debt and boost profit, as money is no longer needed in trading). When elite capitalists see how much more profitable and effective it is than money and the advantages to them of implementing it, it will become the Parallel Non-Monetary Economy of the 100%. Money will become the preserve of the criminally minded, but even that will be addressed. This new VIRTUAL NON-MONETARY INCOME is not generated from the monetary economy or any centralised benefactor system. It comes from something self-contained, real and tangible that has been dismissed throughout history. Things that can now be automatically quantified, valued and monitored by a de-centralised global system.

Scanning down the first column will give you the immediate scale of this activity and the recoverable waste and loss generated by the current monetary market. 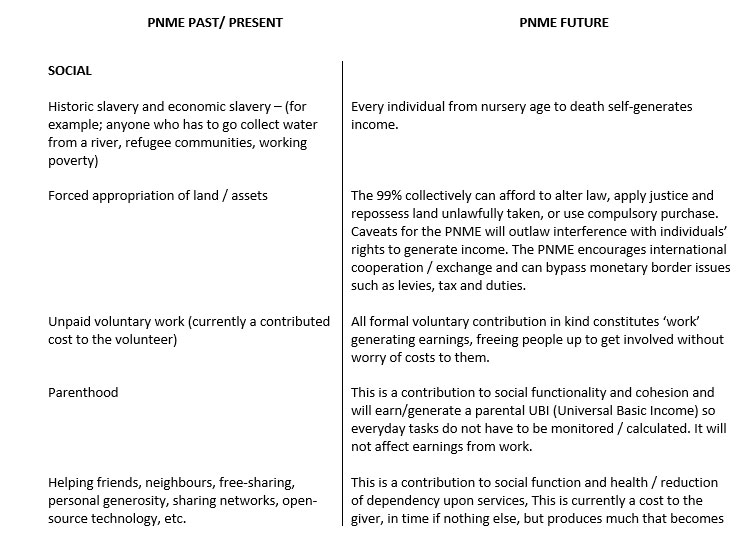 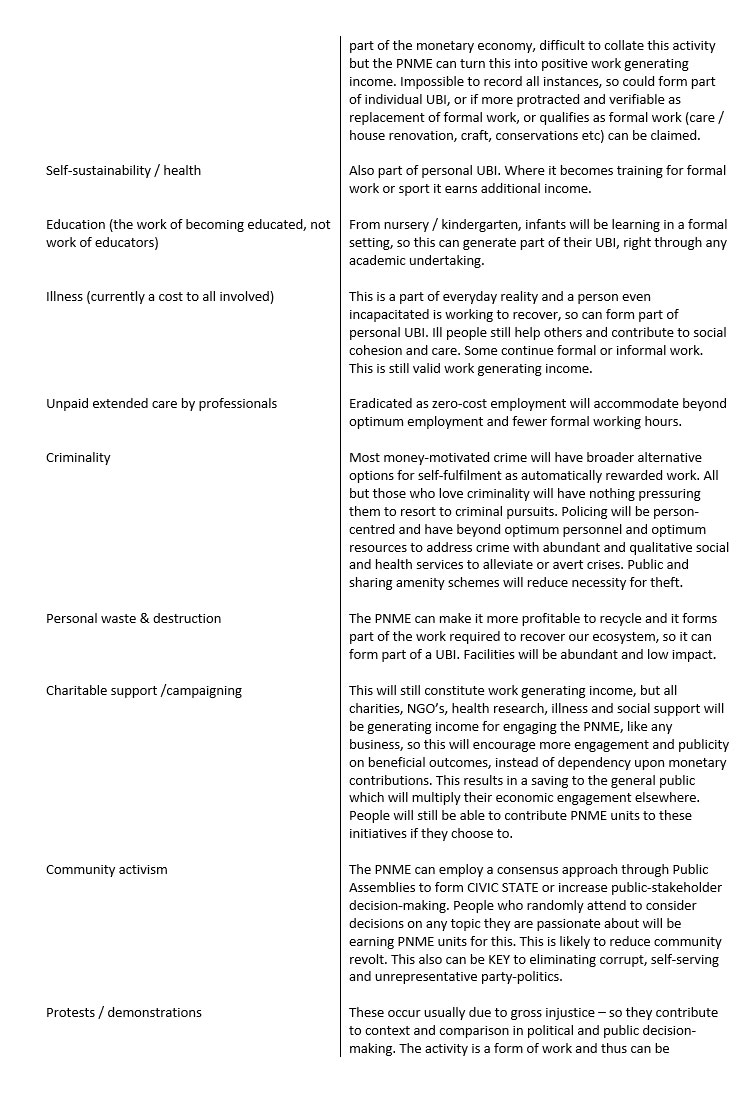 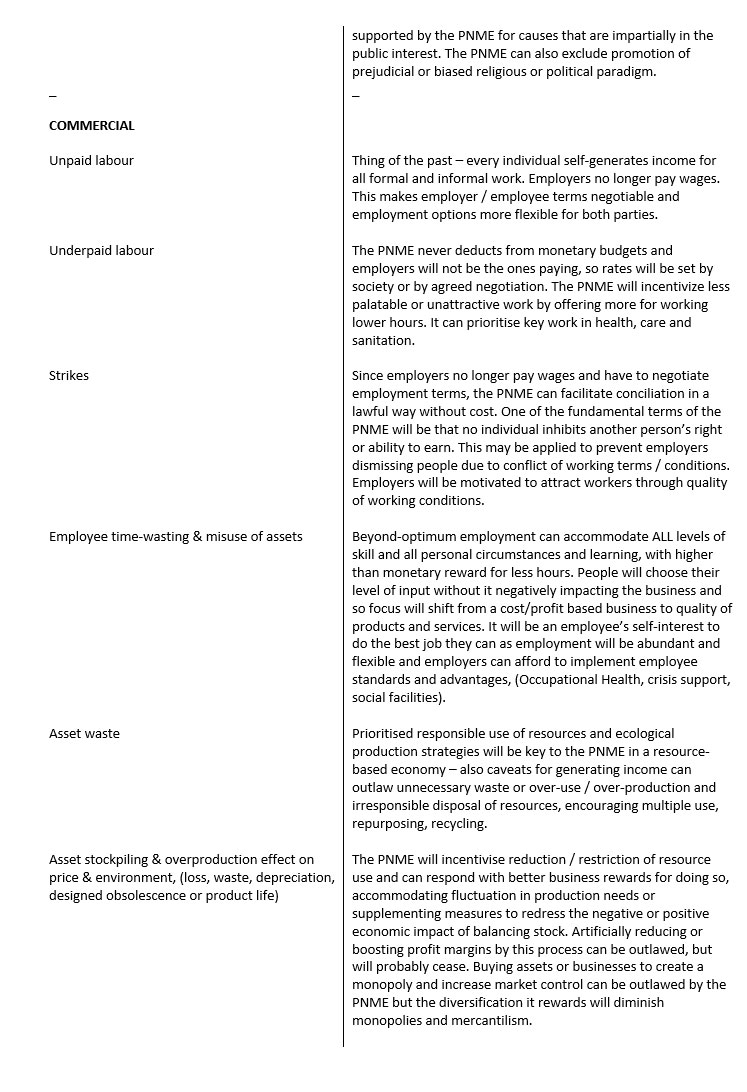 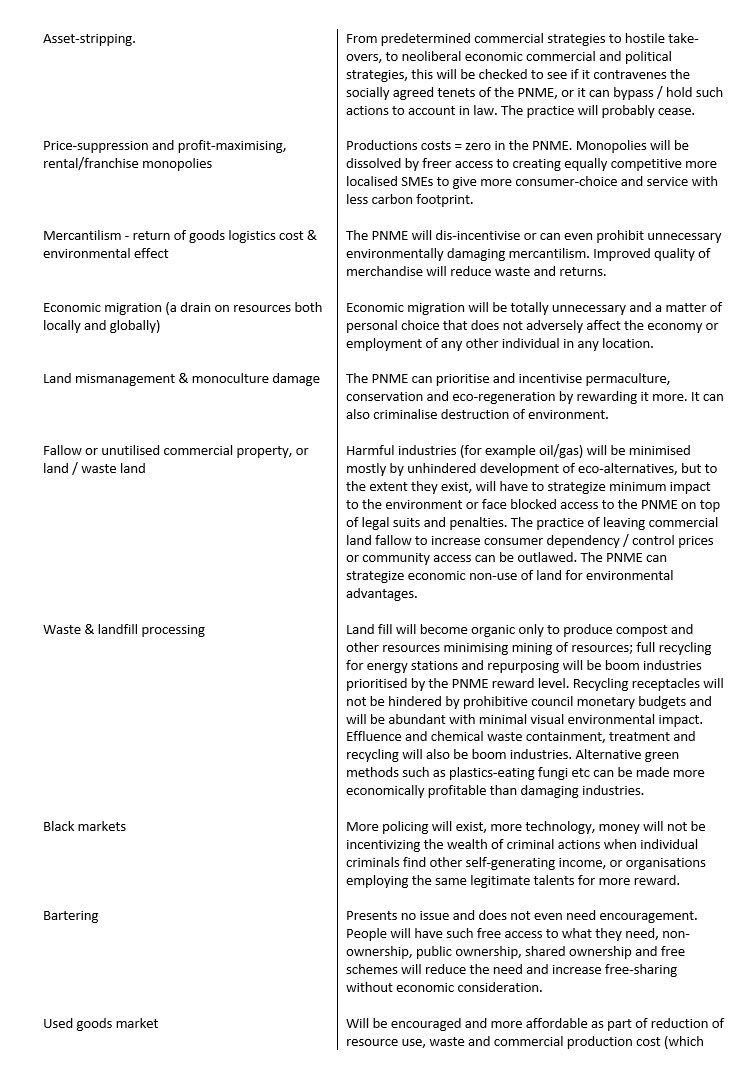 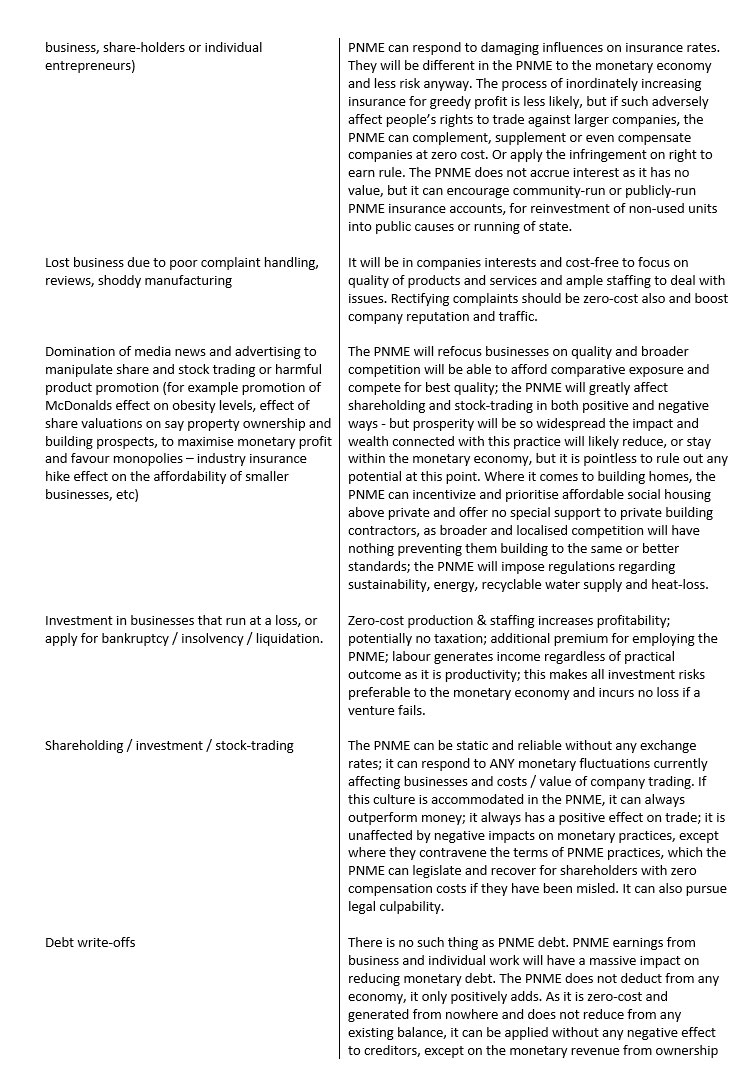 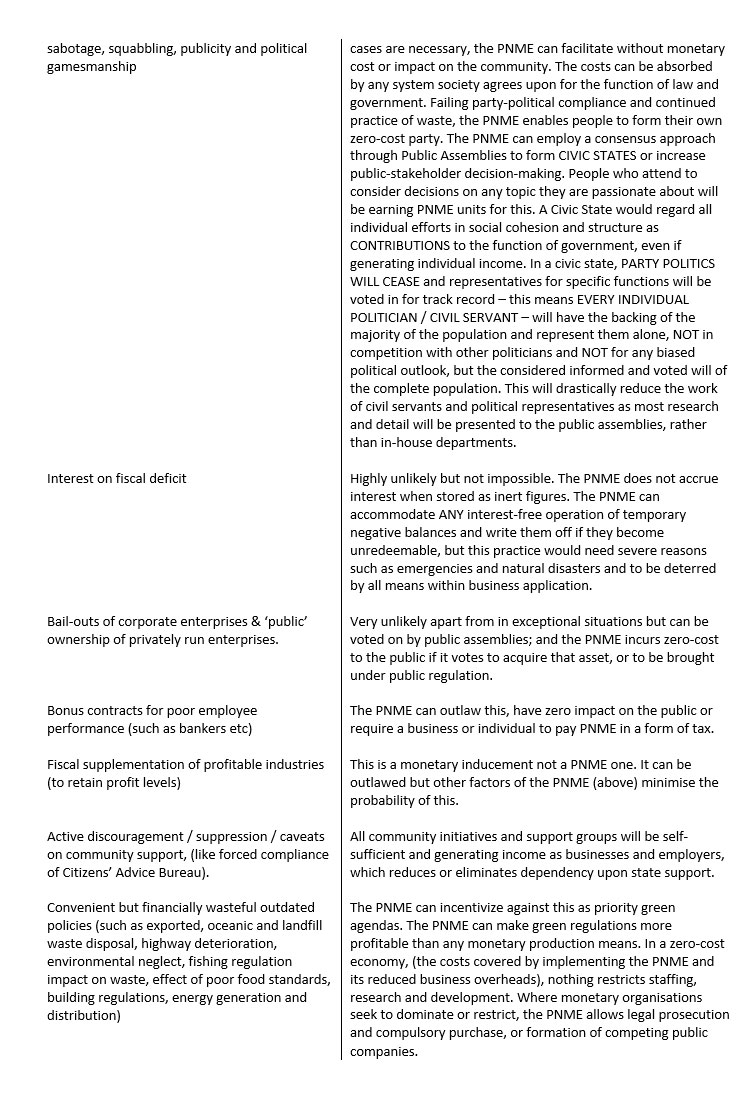 All of the foregoing is under copyright to Kendal Eaton 11/02/2022, and based on the content authored by Kendal

Eaton in the book ‘A Chance For Everyone: The Parallel Non-Monetary Economy’ (Sounding Off UK Publications, 2020 – available for FREE or pay what you wish in download Word / PDF / Mobi formats) or in paperback from the website links. For more detailed discussions check the ‘Discussion’ page on the website – http://achanceforeveryone.com  or the Facebook group – ‘Parallel Non-Monetary Economy of the 99% –  https://www.facebook.com/groups/641184856394195

Tweet
This entry was posted on 19 February, 2022 in homepage and tagged Kendal Eaton, The Parallel Non-Monetary Economy. Bookmark the permalink.