The President is a Tree 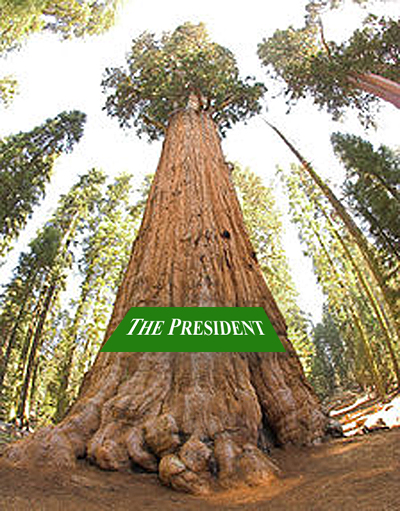 A sequoia in the Sierra Nevada is known as The President.
It’s a three thousand, two hundred-year-old redwood.
It’s two hundred and forty-one feet high, or twenty storeys,
With a billion pine needles that whisper, ‘Beat that!’

It was called The President after Warren Harding,
One of the most pointless Presidents ever:
Harding admitted, “I am not fit for this office
And never should have been here.”

By contrast the arboreal President presides over a forest,
And has grown from a thin sapling to thirty feet round.
Like Louis Armstrong, the President’s gone from poor to rich
Without hurting anything or anyone on its way.

Not one of the White House’s serial imposters can say that.
Instead of sequestering carbon, producing oxygen
And refreshing the air, they deliver stale, wooden platitudes,
Scarring the world’s countries with their body counts.

In three thousand years this President’s crushed no bones,
It’s trod upon no one on the way up;
No one was tortured, no one killed, for this tree to ascend
With its effortless, breath taking nobility.

Every tree’s relationship with its fellow trees is communal.
Trees warn each other under insect attack:
With chemical triggers, their collective immunity’s strengthened
Without single trees telling others what to do.

Man’s yearning for power and celebrity is rooted in fascism:
The idea of one person being adored by millions
Appeals to those who have their eyes on the seats of control
But no one’s heard of fascist trees. It’s inconceivable.

The real President is still growing, in amongst its stand of trees
Known to the local rangers as ‘The Congress’.
These Congressmen are uncorrupted by corporate lobbying,
They just soar in uncomplicated lines to the sky.

The real President is president because of its virtue
Not because it’s placed there by vested interests;
The fakes are uprooted after four years, or they’re assassinated,
While the real ones live to over three thousand.

In a graph showing the biggest military spenders
A tall blue trunk represents the United States.
It towers above the rest. Seven hundred billion dollars
Is what’s spent on annual tree-rings of death.

The real President conducts water along taproots,
Two hundred feet long, up to the tree’s top.
The water of life is cleansed and the air is purified
By a tree that’s standing up to the Anthropocene age –

The age in which man is creating a global gear-change,
As threatening as the meteor falls of the Jurassic,
And centuries from now fossils found in the White House
Will testify to the follies of the oncoming age –

The fossilised remains of the dead wood that was pretending
That it was President of the whole world,
Whilst a life-enhancing tree in the Sierra Nevada was outliving them –
Airily disdaining America’s death wish.

One Response to The President is a Tree