The President of the United States is Weeping

“Foreign arms sales by the United States jumped by almost $10 billion in 2014, about 35 percent, a new congressional study has found. American weapons receipts rose to $36.2 billion in 2014 from $26.7 billion the year before, bolstered by multibillion-dollar agreements with Qatar, Saudi Arabia and South Korea.
Those deals and others ensured that the United States remained the single largest provider of arms around the world last year, controlling just over 50 percent of the market.”
Nicholas Fandos, ‘U.S. Foreign Arms Deals Increased Nearly $10 Billion in 2014’, New York Times, Dec.25, 2015

The President of the United States is weeping.
He’s welling up at the news of the death
Of elementary school kids and college students
Due to callous killers stealing their breath.

Since Sandy Hook in Connecticut in 2012,
When twenty children were shot dead,
There’ve been seventy-four school shootings
But the writing on the wall is unread.

To the President such events are inexplicable:
‘How could anyone do such a thing?’
Yet dim Presidents are the cause of such damage
When the right bells in their brains don’t ring.

Last year, the US President was number one –
Number one weapons dealer in the world.
To sign off thirty-six billion dollars of arms sales
It’s essential that your heart be stone cold,

And your head should remain quite oblivious
To your weapons going astray;
To your own missiles ending up with ISIS,
Only to give you a jump one day.

Likewise the kudos and the cash you derive
From your having a militarised mind
Comes at a heavy price thanks to karma’s law
Which can give you a bite on the behind. Now your own children are dying like the victims
Of those to whom you peddle your toys,
Yet you still ensure the income derived from arms
Stifles any and every dissenting noise.

US Arms Fairs are protected by thuggish censorship:
If their arms salesmen are put to the trouble
Of being challenged about their guns’ use in massacres
Such questioners are marched out at the double.

Anyone who points to the dangers of blowback
Is roundly dismissed as a crank.
Blowback is ignored since the cries of children
Are unable to put money in the bank. 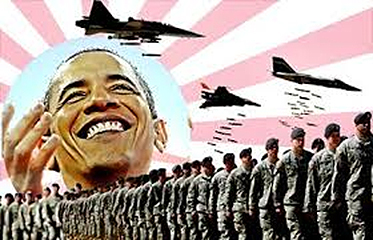 While the President makes a show of weeping
For Sandy Hook Elementary School,
Links between this and his arms trade are clear
To anyone save the all-American fool.

The President is the high priest of a gun cult
Which spawns thousands of devotees
They shoot 30,000 a year in the US stone dead,
And bring his own country to its knees.

Fear-mongering profiteers who hire lobbyists
To visit the White House in droves
To ensure that half the world’s arms sales
Are of the weapons the US so loves.

Defense contractors pop corks at Obama’s surge
In US arms sales to sociopathic regimes
Who torture and kill opponents, and bomb civilians –
With arms that return to haunt his dreams. Eighty-nine Americans die from gun violence daily
While their government can’t sell enough arms –
The US mission to swamp the world with weapons
Blinds it to those at home whom it harms.

2 Responses to The President of the United States is Weeping