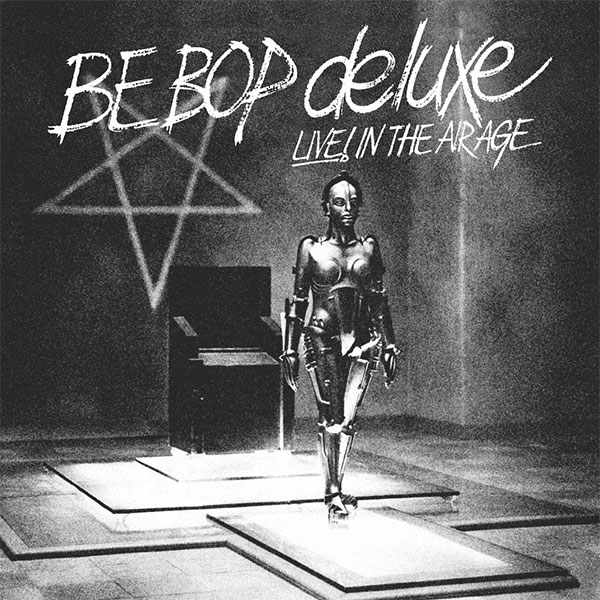 ‘The lights go dim, I’m losing hold,’ sings Bill Nelson in the title track of this monster live reissue which includes not only the original LP remastered but a John Peel session by the band, recordings of all seven gigs in their spring tour 1977 and a DVD of a contemporaneous TV recording.

If Be Bop Deluxe are remembered at all it is probably for later albums such as Modern Music and Drastic Plastic that got to grip with some futuristic rock elements, along with three songs featured on this set: the two sing-along riff monsters ‘Ships in the Night’ and ‘Maid in Heaven’, along with ‘Sister Seagull’ which followed the latter on the Futurama album. It takes some getting used to hearing them as separate songs, they work together so well.

At their best, on songs like this, Be Bop Deluxe are ear-shakingly awesome, elsewhere they are prone to endless guitar-wank, tepid funk jams such as ‘Shine’ (originally the throwaway B-side of a single), and the lazy sexism of songs like ‘Piece of Mine’. I’ve always felt that there was amazing music on offer in the 1970s, and that the idea of punk rock kicking out the bombastic and over-complex was a myth, but then you hear recordings like this and realise something did need to change. Even for the time, this is lazy music when put beside albums from that year by the likes of Chrome, Ultravox!, Bowie, and Eno, let alone the stark and innovative guitar experiments of Television.

Be Bop Deluxe were never progrock but they were prone to wrapping endless solos around their songs, which were mostly rooted in – sorry but there’s no other term for it – rock boogie. Most tracks here have songs trapped inside them trying to escape from the over-arrangements, something Bill Nelson – lead guitarist and vocalist – would, on good days, later facilitate in his solo work. It’s strange that the band were incapable of reading the post-punk and new wave writing on the wall and re-inventing themselves in the way so many other bands managed to. (Change of image, name change, new songs, stripped back arrangements, etc.)

Whilst there’s no denying the power of some of the music here, it is – as the title suggests – rooted in the air age, not the jet or space age, that is in the past, even then. Be Bop Deluxe were a dinosaur, a huge and powerful, interesting and notable dinosaur, but still doomed to extinction. File this official bootleg bonanza under E for Excess and H for History.

Tweet
Tweet
This entry was posted on 3 July, 2021 in homepage and tagged Be-Bop Deluxe, Live! In the Air Age, Rupert Loydell. Bookmark the permalink.

3 Responses to The Resurrection Shuffle