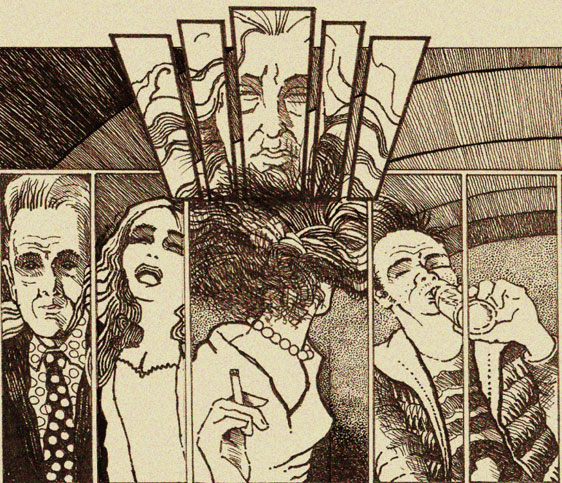 The nautilus of misshapen rooms,
the worn stairs, the keep cellars,
the dead fret of the canal’s breath,
the constant twilight.
Once a bargemen’s rowdy house,
now a domestic composed of residua,
of avant-garde bric-a-brac.

Her presiding graciousness
is distant and discontent, slyly drunk,
one unclouded eye on her chums,
the drinker bees, on nightly furlough
from lives that barely rattle along,
over-licked bones on borrowed rope.
Their industries pass for enterprise around here:
junk stalls, disability claims, cleaning jobs,
ironic divorces.

The nightly skits are wit and scorn,
with evasive pauses in the babble
that agitates the fume,
the cloud base fluxing sour grapes,
sulphur, tar and gasoline.
There’s no one here doesn’t smoke too much,
meeting death more than halfway
with vitals corroded, sullen or overspent.

None of them knew her back then,
when an ear for poetic difficulty
and a fuckable face was a first-class ticket
in the ruckus of obscure fame.
Her sensitive pallor is now a lack of lustre,
the colour of polluted snow.
She is their Queen of Knots
who is always weary and sighs at everything.
A gem of fairy fire, Golden Virginia,
rolled into a tiny wand,
is waved in her fine, pale hand,
writing nothing much, but eternal,
on the passing dark.

Tweet
This entry was posted on 16 October, 2021 in homepage and tagged Jay Jeff Jones, Martin Sudden. Bookmark the permalink.