The Subversive Giant of Cerne Abbas

“One thing is sure. Profound mystery is here… the unheard voice of the
primeval things of the hills.” 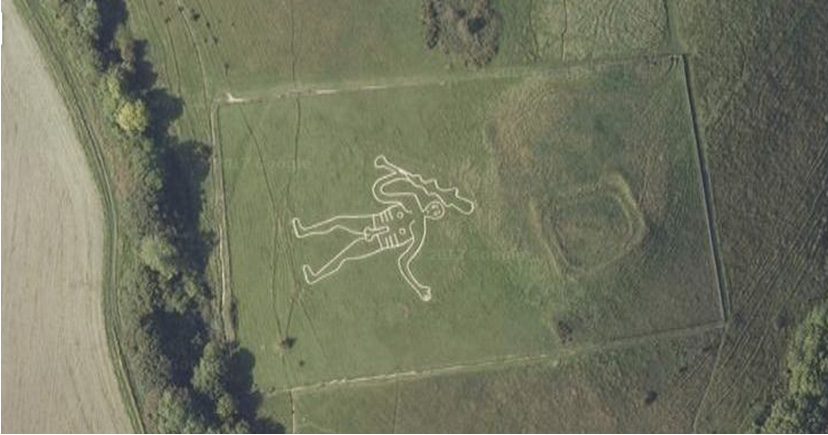 Should you ever glimpse the Cerne Abbas Giant from the air

Whom, aeons ago, some ancient Britons tried to conjure up

By their cutting a chalk graffito into Dorset’s green sod.[1]

They must have been feeling in urgent need of a visit

For the portrait of their God has a 36-foot penis, rising up

Through the grass and the hillside flowers. 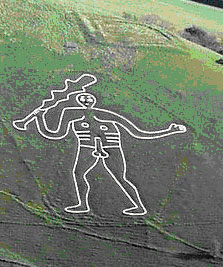 Up and until more puritan times,

When prudish Bishops campaigned to have it neutered

And insisted it be redrawn along respectable lines. 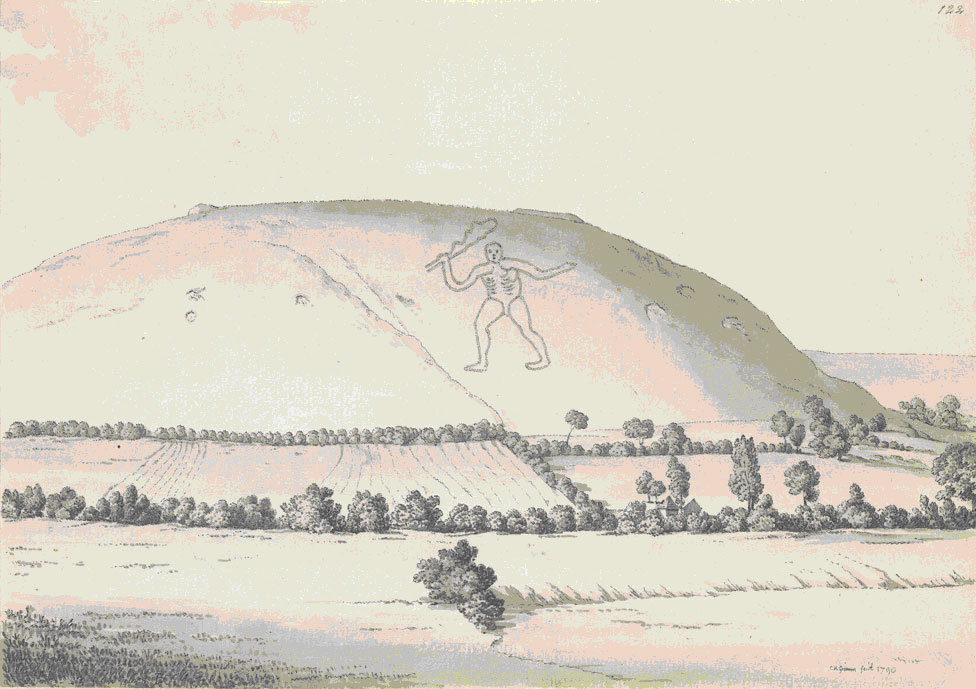 The Giant, Cerne Abbas in 1790 by Samuel Hieronymous Grimm

But the organ was resurrected and it was even planned

To plant Marilyn Monroe opposite the Giant’s Hill –

Laid out in daffodils and lifting a fluttering, golden skirt

So Dorset’s Celtic God could enjoy a worldly thrill.[2]

And alleged it was luring mankind to hell,

To others it was just a Green Man, part of the Dorset landscape

Whose breast-shaped hills caused the Giant to swell.

And what’s remarkable and intriguing is that the birth rate

In this part of the world is always twice normal.[3]

The scientists insist suggestions of a pagan God’s influence

Is anecdotal – no more than an old wives’ tale,[4]

However there’s statistical evidence to show

That childless couples have reaped a reward

By their making love on a balmy summer’s night 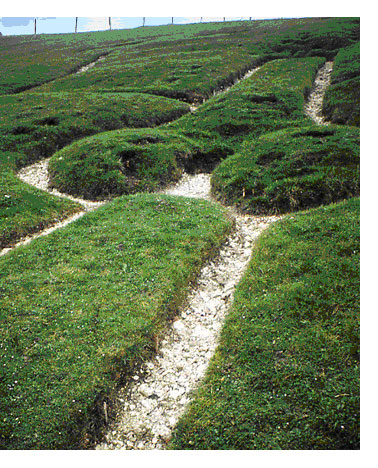 While relaxing upon the phallus of a 180-foot-tall Giant

Men and women have lost their virginity

And as they squirm and writhe naked, their ecstasy

Seems to be heightened by this Pagan divinity. 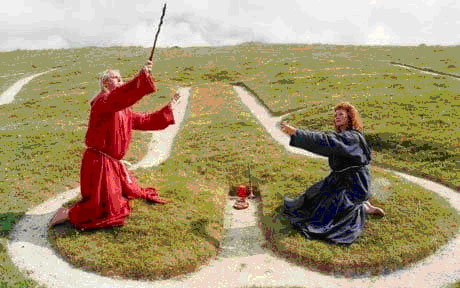 And childless women hoping to get pregnant

Have knelt down upon the Giant’s testicles,

While a helpful white witch guides them through

But scientists and skeptics consider it impossible

That such a place chosen for lovers’ trysts

Could have any effect upon someone’s fertility,

And they’re sure there’s nothing they’ve missed… 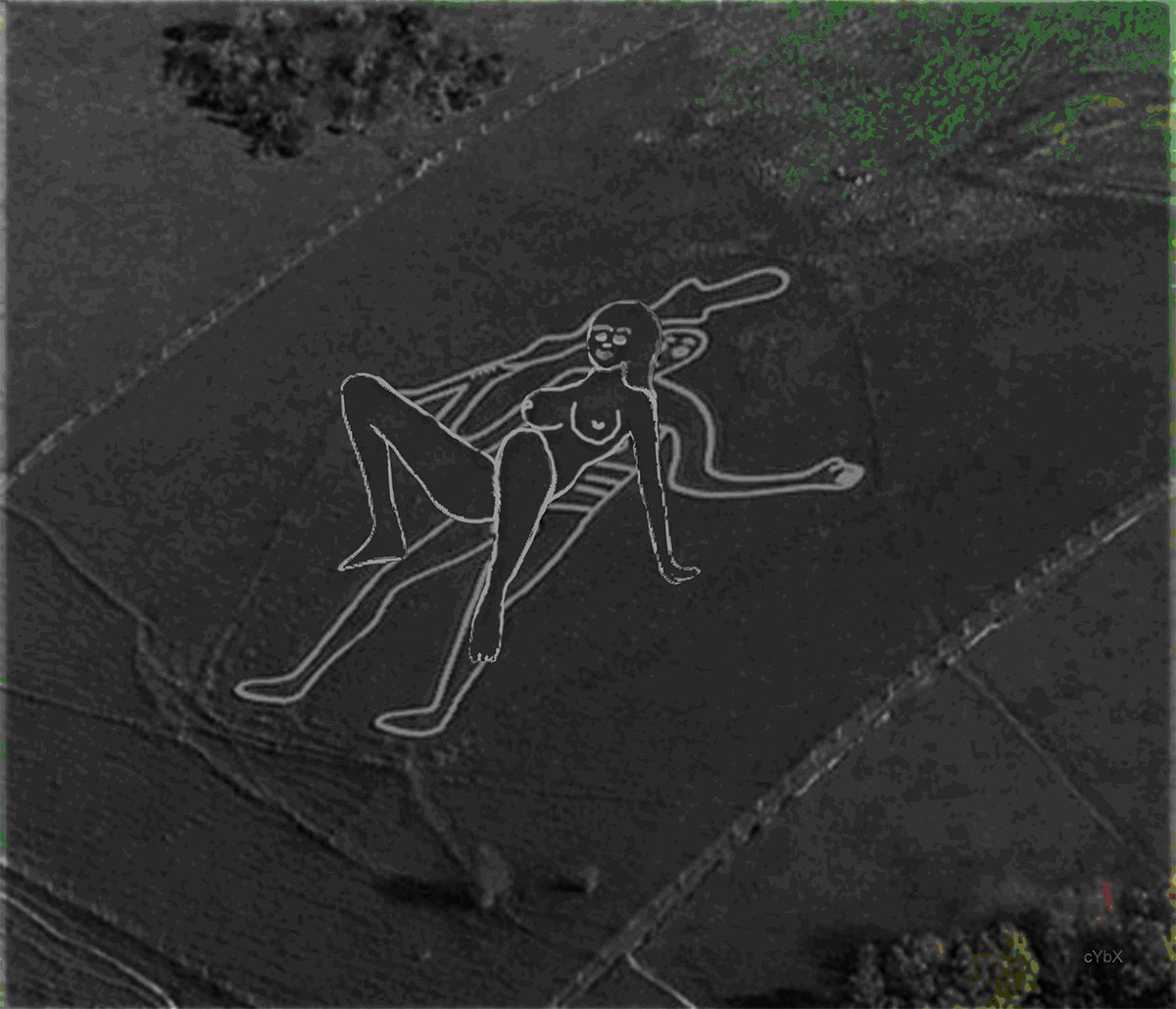 Such as a gigantic, Celtic, orgone accumulator

That throbs its pagan way through gentility,

And which makes it easy to cast inhibition to the wind –

It so often being greeted by a gleeful hilarity. 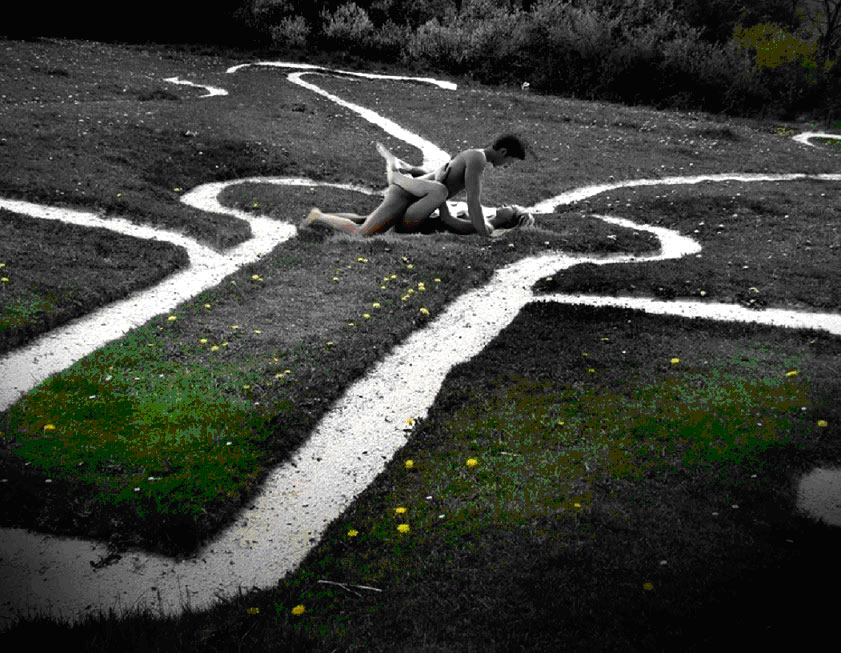 Near to this seminal phallus is the site for a maypole

And who later, in a bleary haze, realize they’ve allowed

A talismanic organ to play a part in their fate.

Where an earth spirit lures you on a pilgrimage

Towards its tumescent tussocks, alive with intimacy,

And delighting in arousing those from another age.

Sometimes in summer the moonlight will pick out

As thirty-odd couples can be seen harvesting love

And making climactic sounds in a pagan prayer.

[1] “It is supposed to be above a thousand years standing as there is a [three figure] date between its legs  […] Some think it was cut by the Ancient Britons , and that they worshipped it.” This is the first mention of the Cerne Abbas Giant. It appears in an anonymous  letter to the Royal Magazine, IX, 140-1, September 1763.  The Royal Magazine or Gentleman’s Monthly Companion was published from July 1754 until December 1771

[2] In 1980 Kenneth Evans-Loude, an artist from Devon proposed that he cut on the hill opposite the giant, a figure of Marilyn Monroe. Despite the fact that the landowner approved, the Arts Council refused to sponsor the project. Paul Newman, Lost Gods of Albion, 1987 pg. 76

[3] “Since Victorian times, the 180ft Cerne Abbas Giant in Dorset has been said to cure childlessness and bless women with improved fertility.  Now the women in the surrounding towns and villages have the highest birth rates in the country. The latest figures from the Office of National Statistics show that the women of North Dorset have on average three children each – nearly double the national average and nearly three times as much as the city dwellers of Westminster.  […] Katie Raine, a nursery manager, said the increasing number of small clients at the Archway Nursery in Pimperne – which is in sight of the Giant – were living proof of the findings. “We can take 73 children in any one day and we’re absolutely chock-a-block,” she said. “We have a baby unit for five infants, and that’s booked until next year, so there’s definitely a baby boom on.” The findings – from a survey of 10,000 North Dorset women aged between 15 and 44 – placed the district at the top of the charts, leaving the London borough of Westminster at the bottom, with just 1.16 children per woman.” Richard Alleyne, “Cerne Abbas Giant ‘inspires’ fertility boom. A giant chalk man carved into a west country hillside is living up to its legendary status as a figure of fertility by producing a baby boom in the surrounding area.” Daily Telegraph, 26 July 2010

[4] “Udal in his Dorsetshire Folklore (Hertford 1922), related that a man and woman wanting issue must actually have sexual connection on the spot to give full effect to the charm.” H.S.L. Dewar, The Giant of Cerne Abbas, West Country Folklore No 1., General Editor, Theo Brown, Guernsey, C.I.: The Toucan Press, p. 6

[5] “According to folklore, a woman who sleeps on the figure will be “blessed with fecundity”, and infertility may be cured through having sex on top of the figure, especially the phallus.” Richard Alleyne, “Cerne Abbas Giant ‘inspires’ fertility boom”, Daily Telegraph, 26 July 2010