THE TSUNAMIC DANCE OF GOD 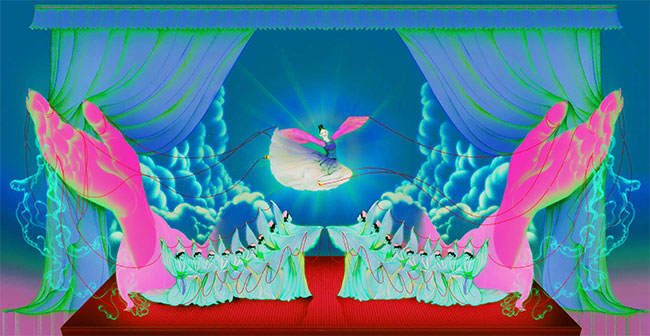 “Whoever you are, please come inside!” he told so to express his inability to get up from his bed. Earlier, when he was in his village or abroad, he was always like that. He was a writer and it was his habit to invite everybody into his house and talk to them, whether he came to see him as his fan or he was just a street vendor! But now it’s different—he invited everybody because of his inability. He was living in a room in the upstairs at present.

A tall young man came in. On his fair face there was a black moustache. His beard had many curls- it appeared quite short. May be that was the fashion of the day. Time expected from the young, different fashions at different times. His uncombed hair was drawn to the front. His hair style was expressive of his playful nature and the purity of his heart.

Perhaps the foul smell that emanated from the room might have disgusted him. He did not suspect without any reason. How many days had gone since he had become bedridden—he had to pass motion and urine in the bed itself! Because of the foul smell, the young man tried to close his nose but his heart would not allow him to do so. The young readers who read his stories which he had written during his good times— when he had time and when he was healthy, came to bathe him. At such times he remembered the days when he swam and bathed in the river. Even after he had returned from abroad, he used to go and swim in the river. Such times brought the memories of seas he had seen abroad.  He used to spend his weekends not in taking brandy or whisky but in swimming in the sea. All his swimming ‘adventures’-  lying on his back or with his face and chest down, were unforgettable memories.

He could not see the visitor’s face clearly. “Who’s he?” he asked himself. His sight also was poor. One eye had completely blocked his sight; another was like a half-opened window.

He held his hands and mumbled: “kaka!”

He needed nothing to recognize him. Everybody used to address him affectionately ‘uncle,’ ikka, or mama.

Only his sister and he used to address him kaka. In those days, he used to laugh whenever they addressed him so. But today it had become a mark to recognize somebody.

When everybody in the Gulf spoke with a different accent, mixing English, that family alone used the tongue of Chamravattam.

When the young man tried to sit on the bed, he prevented him saying, “No! No! It’s stained with urine!” But Adhi did not hesitate to sit even after he told him so.

When his lifeless hands were held by Adhi’s hands throbbing with life, fresh air peeped in as a

symbol of the joy of Nature. When fresh air came in, it seemed that music itself came in.

The same music he used to hear in Ajman beach! Then Adhi Dev was ten and Minnu was six. Their father Vaishakhan and mother Chandramathi were enjoying their second honey moon in the

beach. Like the stories his friend Vaishakhan wrote, his heart was overflowing with love.

Before he married Chandrmathi, he had some affairs. After the marriage, he had to have some restrictions. That truth was a secret known only to her and his lady loves.

As he had no children, he loved Vaishakhan’s children very much. Whenever they ran backwards, competing with the waves, they held his hands tightly. Once he ran into the sea dragging Adhi  along with him.

Immediately Minnu began to cry: “Take me also to the sea!” For a few minutes he stood with the children in the sea water, guarding them against the waves of the sea.

Sensing the silence that pervaded the whole house and searching it with his eyes, he asked, “Where is aunty?”

Last Monday we had her 40th.  day ceremony. That was all what he said. Silence reigned between them. The young man smiled at the question that fell out suddenly: “Do you know how did the sea water become salty?” That was a smile filled with worry!

When he was a boy he was full of such questions. His little heart thought that kaka was an encyclopaedia.

“More than one and half a year,” the old man replied.

“Kaka, what happened to your novel?”

He thought that the talk about stories and novels blocked the flow of blood in his nerves.  The blood had already frozen in many nerves. Sometimes, he thought that if the blood flow would stop completely, he could stop passing urine and motion in the bed.

Like his mind, his stomach also had made a truce with hunger. His wife used to stand near the dining table and look at him eagerly as he relished the food she served him. Her tasty food had made him, her slave. Whenever he praised her for her taste, he experienced a rare sense of joy. Before he realised that it was a purer kind of joy to relish her food than being a writer, she had gone! At times, he also served her food. That was also a pleasant experience. However much he ate the food she cooked, he never felt satiated. As he had a lean physique he never became plump!

She used to ridicule him, “However much you take, you never become plump!”

In return, he used to look at her face and smile. She went away even without saying goodbye. She knew earlier, when he was abroad, that his heart was not strong enough to withstand the shock of her departure. That was why she left him all of a sudden, after preparing the lunch.

She had told him that she had borrowed some rice from their neighbour. That ‘loan’ he could

“Whether she would get her punishment in kabar or not, I don’t know! O God! Had I seen my neighbour I would have pleaded my inability to repay the loan!” he thought.

Adhi asked, “Wasn’t the novel finished yet?” That question gave him some solace. Thoughts  froze in his heart.

“After returning from abroad, we were running from one hospital to another, for a child. We sold everything we had … the doctors were becoming richer and richer!

When we realized that the children were safe in the hands of god, it was already too late. When my life emigrated into the world of writing, I realised that there was no need for a separate life-story!”

The copy of the novel might be lying amidst her saris or amidst the bundles of books. When the big house was sold there was no space for keeping the books. Her saris and maxis had become book shelves.

Sometimes termites entered through the doors of the thatched house to read the books. There were snakes too, which died of reading his books. The hens pecked those snakes among the books. The hens never read books! It was a surprise that he searched for the book packets and brought them before him.

The termites had already edited the words and sentences that needed editing.

The papers contained facts related to a place.

“What’s Vaisagan doing?” he asked, as a reply.

“We could not see him often after he became the president of the academy. We know that he is alive only through his photos and writings that appear in papers and special numbers!”

He liked his joke. Bubbles of laughter burst in his heart.

“Don’t you need to go? Chamaravattam is far away. Won’t Chanadramathi be worried, if it’s too late?”

“Um”. That ‘um’ was the whining of a man who had become a slave of Time!

Kaka! He wanted to ask something but he froze his words in his throat by swallowing his saliva.

“It’s O.K!” He said as though he had understood his mind. Shouldn’t a writer have the ability to understand the feelings of others?” But even his own pen would not come forward to pen down  his trials and tribulations.

“I’m happy that I could at least see you!”

He had opened the flood gates of joy. With a heart completely filled with love and affection, he prepared him to take him for an outing.

He cleaned the stains of stools with coconut- fibres. He bathed him and found out for him a dhoti and a shirt from a bundle of clothes his wife had washed earlier and kept folded neatly.

Adhi carried him to an auto. He could see the colourful scenes of Nature that came out, pushing the curtains aside. The sperms which did not materialize as children, were hung inside the glass tubes. They, which should swim fast competing with one another, were standing motionless.

“Kaka, the estuary!” He didn’t need the information at all. The duets of Love and the smell of the sea could be felt even from miles far away.

The children who had come with their mothers, were playing there. Some of them were holding eagle kites in their hands.

The eagle kites were flying all over the sky, like the life that was flying round and round the world. The little angels were pulling them down with threads whose edges could not be seen from the ground. It was like god playing kites with human lives.

The sea was calm. That was a sight not seen so far.

The sea breeze gave out the smell of traditional medicine.

His legs that had been quite lifeless so far, started pulsating with life.

He could put his legs slowly on the sand.

Belief and expectation were on Adhi Dev’s face. He did not say anything.

He was steaming with enthusiasm as he walked forward.

“Adhi! My dear boy! You wrote ‘sea-mother’ on the sea sand and the sea waves came and wiped it out…do you remember?”

“I should tell Vaishakhan that the title of a life-story is written on the sand: ‘The Tsunamic Dance of God!’ It should be taken out before the mother of sea wipes it out!”

The waves came fast; they became thinner and thinner as they came nearer and nearer! He walked forward in staggering steps, with his legs which had been lifeless till then!

dhothi: unstiched garment for men that hangs from waist to ankle.

Tweet
This entry was posted on 5 June, 2021 in homepage and tagged P.Ramgopal, Velliyodan. Bookmark the permalink.