the woman behind it 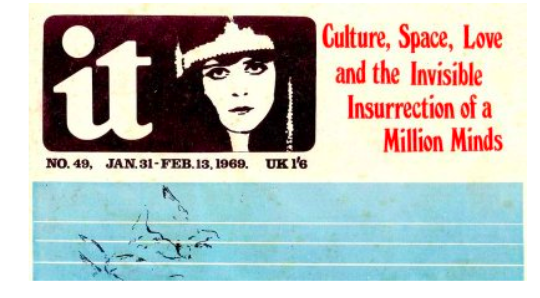 When International Times first hit the streets in 1966 the masthead carried a logo with which the newspaper would become indelibly associated.

It depicted a dark haired woman starkly peering out of a jet-black void, with kohl-enhanced eyes and wearing a slightly vacant yet gently penetrating expression into which you could read almost anything you chose.

Perhaps she was no more than an exotic sex-goddess and, however anti-consumerist International Times was high-mindedly claiming to be, market forces were going to operate upon IT just as they were operating on everything else. But whatever lay behind it the IT editors’ choice in settling upon Theda Bara was an appropriate one. Her look harked back to the nineteenth-century and it was an influential one as the London gallery-owner Jeremy Maas noticed:

“There is no question that the Hippy movement and its repercussive influence in England owed much of its imagery, its manner, dress and personal appearance to the Pre-Raphaelite ideal… It was observed by all of us who were involved with these exhibitions that visitors included increasing numbers of the younger generation, who had begun to resemble the figures in the pictures they had come to see.”

Jeremy Maas, gallery-owner, quoted in Leslie Parris, ‘The Pre-Raphaelites: A Personal View, in Pre-Raphaelite Papers’ 1984]
In 1915 Theda Bara had made a silent film called ‘The Vamp’ and the look which she establishe‘The Burne-Jones Woman.’ 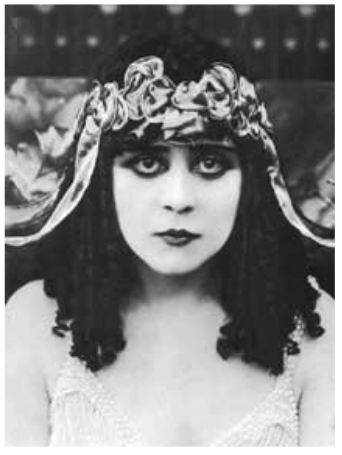 “The image,” as Andrea Rose has pointed out, “was to influence a host of aspiring screen stars from Louise Brooks to the young Garbo.” Andrea Rosa, Pre-Raphaelite Portraits, The Oxford Illustrated Press, 1981, p.4

Choosing a ‘Burne-Jones woman’ to symbolise a movement for which IT was the tribune may have seemed slightly quaint but in fact the Pre-Raphaelite Brotherhood – of whom Burne-Jones, and William Morris were the principal members – stood for a staunchly idealistic political fervour and the anarcho-socialist Morris would make no bones about the movement’s utopian philosophy, declaring firmly that “No man is good enough to be another’s master”. He was once hauled up in court for breaking a policeman’s helmet during the trial of some fellow socialists. 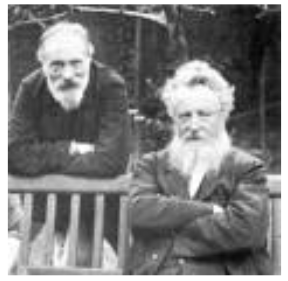 Due to the movement’s medieval revivalism and its Arthurian feel, political radicalism was an aspect of pre-Raphaelitism that has often been overlooked, and, by an odd fluke of history, the hippies of IT’s era would recreate an almost identical mixture of self-adornment combined with a headily hedonistic surface patina – all of which belied their more subversive and idealistic concerns.

From IT’s frequently squatted offices the potent Theda Bara logo quickly became the siren of libertarian anarchism. In 1884, in an editorial in his magazine Justice, William Morris had complained that “the grip of the land grabber is over us all; and commons and heaths of unmatched beauty and wildness have been enclosed for farmers or jerry-built upon by speculators in order to swell the ill-gotten revenues of some covetous aristocrat or greedy moneybag”.

Judging from this, Morris might well have endorsed IT’s activism: as buildings that housed IT were routinely liberated from private ownership and handed over (much to an absent owner’s horror) to “the movement.” – invigilated by this silent ghost of the Queen of Egypt, the star of the first celluloid version of Cleopatra, Theda Bara.

In Art, Wealth and Riches (1883) Morris emphasised the value of “All who assert public rights against private greed…”

Likewise the loosely revolutionary spirit that IT embodied created new standards of accountability – those who were tempted to defile the emerging community spirit by indulging in anything that could remotely be construed as a “rip-off” were mercilessly chastised, pilloried and denounced by IT.

There was an equally robust taboo against “selling-out” which again covered a multitude of sins, and was principally directed against the Medusa-like tentacles of corporate power which could reach into the souls of the unwary and the unprepared – leading to almost Talmudic refinements of paranoia as to whether X or Y had “sold out” by such-and-such a shameless flirtation with some egregious aspect of “straight” society. Cleopatra’s asp would be waiting in the wings to bite all those tempted to depart from all these hippie norms as they gradually began to establish themselves.

Theda Bara’s reincarnation was as a kind of hippie household god, a benign protector against the movement’s demons who threatened this hazily held together collective with police raids, group panic-attacks and randomly induced “bring-downs”.

Bara became the invisible arbiter of the potent mores of the times. If you liberated (or stole) something then somehow or other she was there to give your devious conduct a kind of ethereal blessing. At a succession of free festivals held on land reclaimed by the Peace Convoy – hippie travellers, anarchists, and musicians – such as in Windsor Great Park or at Stonehenge on Salisbury Plain the IT girl would always be there too like a magical mascot, an anti-brand displayed by her loyal – and often activist – street-vendors.

Of course Theda Bara herself was quite oblivious of the fact that she was being burdened with all this revolutionary baggage since she had died over a decade before, in 1955 aged 70; furthermore she was only there in the first place through an accident of fate.

At IT’s first editorial meeting where the look of the paper was under discussion, someone vaguely recalled that in the nineteen-twenties there had been a Hollywood actress known as the ‘it’ girl and that – if they could find a picture of her (or indeed remember her name) – this would obviously be appropriate to use on the masthead: the ‘it’ acronym clearly suiting International Times. 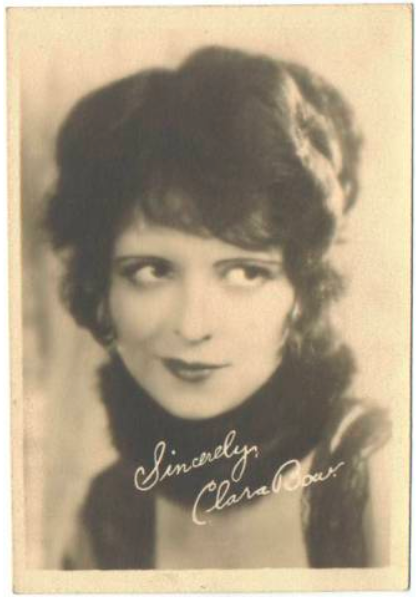 It turned out that the ‘it’ girl had been Clara Bow who owed her sobriquet to a 1927 film called ‘It’ (based on a turgid novelette by the novelist Elinor Glyn, the Barbara Cartland of her time). However although the heart-shaped faced Clara Bow had sometimes worn heavy make-up (her cupid lips came to be known as ‘Bow’ lips) it was felt that there was something missing.

Compared with Theda Bara, whose picture was now also a contender, the bright-orange haired Clara Bow seemed slightly girly and even sexless – a nineteen-twenties version of Doris Day.

Thus it was that the more saturnine Theda Bara forced herself up to the top of the pile of images which lay strewn about beside IT’s graphic-design boards and the ‘it’ girl of the twenties was promptly side-lined and replaced by a woman who would become the IT girl of the sixties.

The shimmering Theda Bara was a welcome presence, who – as well as everything else which she would unwittingly herald – shortly came to stand for sexual liberation: a posthumous role which, as it happened, was in keeping with Theda Bara’s own character and she certainly had the edge on the rather more simple-minded and much less self-aware Clara Bow, who when once asked what ‘it’ was, replied “I ain’t real sure.” Fox studios had promoted Theda Bara by billing her as the Egyptian-born daughter of a French actress and an Italian sculptor and claiming that she had spent her early years in the Sahara Desert under the shadow of the sphinx.

They invariably referred to her as the “Serpent of the Nile” and encouraged her to discuss the occult whenever she was interviewed. Theda Bara’s name was an anagram of ‘Arab death’ and it was hinted that many hapless desert-dwellers had been drained of life by her exorbitant attentions and then left as no more than bloodless shards in the Saharan sands.

At the height of her fame, Theda Bara’s vamp image was notorious enough to be referred to in popular songs of the day. A line in “Red-Hot Hannah” ran “I know things that Theda Bara’s just startin’ to learn – make my dresses from asbestos, I’m liable to burn….”

Thus, as the sixties excesses grew increasingly unrestrained Theda Bara may well have derived some satisfaction from the Dionysian events that were occurring under her aegis – should her much-vaunted occult powers have allowed this eerie female version of Alastair Crowley – IT’s Time Lady – to watch it all from beyond the grave.

Looking back and noting how what seemed at the time to be unique and unprecedented manifestations of human behaviour have just been the same old archetypes wafting through time endlessly repeating themselves, you realise, along with William Morris, that “The past is not dead, it is living in us, and will be alive in the future which we are now helping to make.”

Recently the writer Mark Morford asked in a recent issue of the San Francisco Chronicle, “From where comes all this hot enthusiasm for healing the planet and eating whole foods and avoiding chemicals and working with nature and developing the self? Came from the hippies. Alternative health? Hippies. Green cotton? Hippies. Reclaimed wood? Recycling? Humane treatment of animals? Medical pot? Alternative energy? Natural childbirth? Non-GMA seeds? It came from the granola types (who, of course, absorbed much of it from ancient cultures), from the alternative worldviews, from the underground and the sidelines and from far off the goddamn grid and it’s about time the media, the politicians, the culture as a whole sent out a big, wet, hemp-covered apology.”

Or as Theda Bara’s contemporary, Dorothy Parker, put it:

“Oh, life is a glorious cycle of song,
A medley of extemporanea;
And love is a thing that can never go wrong;
And I am Marie of Rumania”

View all posts by Heathcote →
This entry was posted on 18 January, 2012 in homepage and tagged clara bow, Heathcote Williams, international times, theda bara, woman behind IT. Bookmark the permalink.

7 Responses to the woman behind it