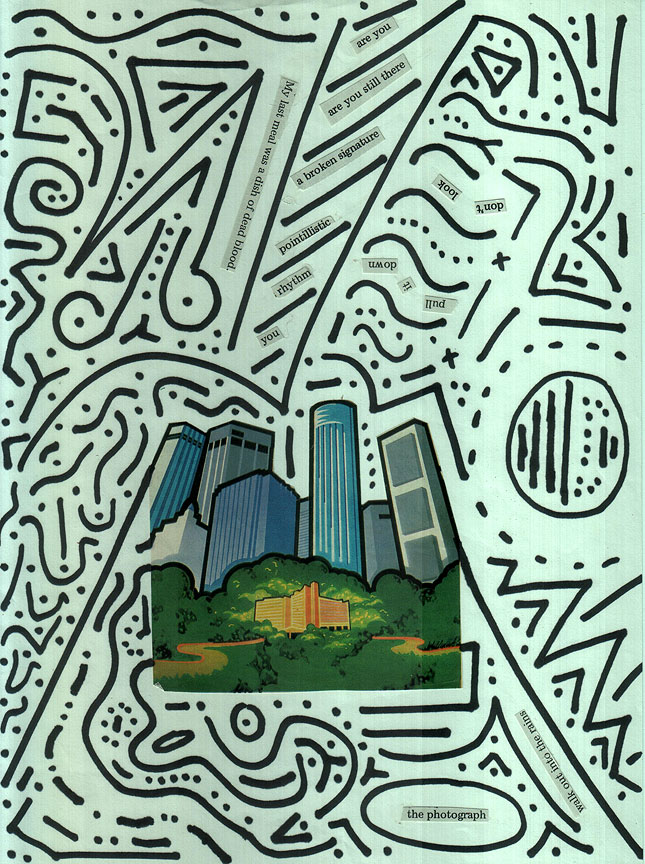 The televisions light up by themselves. They are the law. On every screen a city is burning down and there is no way to change the channel. Broadcasting is live. At the end of each day, commentary follows. A comforting voice comes from the speaker, saying it is safe to go to sleep now. The fire is over for today.

The heavy machines bite into the ground. When their iron teeth are raised, dripping soil, they shovel skulls and feathers from the earth. The skulls are pale against the black soil, pulled like eggs from the belly of the site while the feathers appear fluorescent, having lost none of their glamour in the dark. Deeper underground are animal skins too old to be identified, but the eyes are still in place, intact and bright as the quick of their claws.

The salesman says he wants to make a deal, states a price and winks to let you know everything is negotiable. A tiny lightbulb on his tie is flashing as he speaks, and you cannot keep your eyes off it. On a notepad he begins to calculate how much you have to pay, then holds it up for you to see, and the buzzer goes off in the button he presses with his free hand under his lapel. This is it, he tells you: the bargain you have lived your life for, and he pulls paper streamers from his cuff. You are still undecided. The salesman takes the handkerchief from his pocket and flicks it to send a shower of confetti over you just as he begins to beat together the cymbals he has strapped to his knees. Why does it take you so long to consider his terms? He lies down on the floor and asks you to walk over him. Yes; do it. Wear pointed shoes; he will not let you know when you are hurting him. Do whatever you want, this is only his job.

Tweet
This entry was posted on 8 September, 2018 in homepage and tagged David Chorlton, Rupert Loydell. Bookmark the permalink.