Time and a load of Words 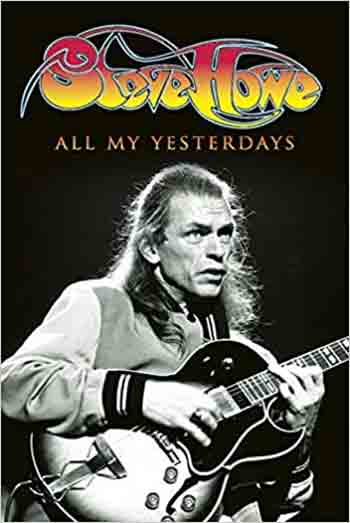 Look what I bought.

Err, no, it says he wrote it all by himself on his computer. And he’s been married and vegetarian for decades now. He seems pretty organised and together really.

So it’s a dull story about guitar solos and Yes?

Err, sometimes. He has been in other bands, too, remember. Before Yes, and alongside them; and when Yes broke up and weren’t talking to each other.

Oh yeah, I remember Tomorrow. They were good.

And Asia were okay, too. And bits of Anderson, Bruford, Wakeman Howe.

He was in The Buggles too, wasn’t he?

No, The Buggles joined Yes for Drama – a lovely album.

Really? Whatever. Anyway, lots of juicy gossip, infighting and details of all the arguments about songwriting credits?

Umm, no. He does have a go at Rick Wakeman’s speech at the Rock’n’Roll Hall of Fame, and he occasionally mutters about how Chris Squire was always late to stuff, and there’s odd anonymous hints about bandmates partying too much, but that’s about it.

So what does he write about?

Well, guitars quite a lot. I skipped those bits though, they get a bit technical.

He has a thing about cars, too. I skipped those bits too, they get really technical as well.

So cars and guitars. What about the music?

Umm, even though there’s over 300 pages here there doesn’t seem that much about the music. I mean it kind of reads like general diary entries for a lot of the time, there’s no real insight into how Yes make music here, more a list of studios, arrangements, work patterns. There’s lots of stuff about his solo albums, too.

And which guitar he played and which car he drove to get there?

Err, yes. How did you know?

Just a hunch. You enjoyed the book though?

It’s a bit dull actually. I was hoping for something more. I wish he could write like he plays guitar.

What, solo over everything for hours on end whilst some hippy sings unintelligible lyrics about dragons and elves?

No! You really don’t get it, do you? Yes have never sung about that kind of thing, the lyrics are more a kind of associative poetry.

And endless guitar and keyboard solos.

You are such a cloth-eared luddite sometimes.

I was going to say the same about you. And no, I won’t borrow the book thanks.

Don’t mind if I do. Just don’t put any of that hippyshit music on.

Tweet
This entry was posted on 30 May, 2020 in homepage and tagged All My Yesterdays, Johnny Starship Trooper Brainstorm, Steve Howe. Bookmark the permalink.