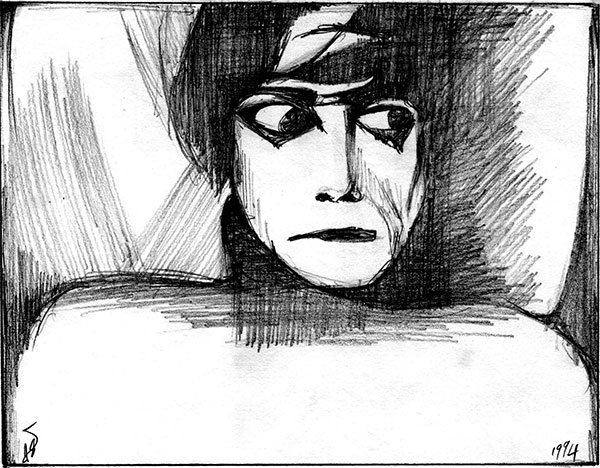 If Decadence is an art of aesthetic nihilism, then Expressionism is an art of tortured souls.
One should not underestimate the influence of Lotte H Eisner’s comprehensive exposition of the cinematic dramaturgy of Expressionist film in her book The Haunted Screen: Expressionism in the German Cinema and the Influence of Max Reinhardt. Originally published in French as L’Ecran Demoniaque in 1952, Eisner’s seminal work was revised for its first English publication in 1969, a translation by Roger Greaves. Not only did Eisner explain the historical origins of a ‘predisposition towards Expressionism’ she also identified all of the main features of the movement, defining key ideas including Stimmung, the brooding, speculative reflection of Grubelei and the visual effects of shadowy chiaroscuro, effects that evoke the ‘twilight’ of the soul.
These, and other features were characteristics of an aesthetic tendency which, emerging in the paintings of Kirchner, Marc, Kubin, Klee and others around the period 1908-1910, formed a bridge between the final phases of nineteenth century Symbolism and the emergent avant-garde of the twentieth century. The Expressionist sensibility – all art is a matter of sensibility – is a sensibility that favours violent contrast, it cultivates a mode of ultra-dynamism finding its most extreme resolution in a climactic paroxysm.
Yet, another dimension of the same sensibility, or ‘interior vision’, can be understood as a type of super-stylisation where objects are not so much represented, but rather apprehended through a process requiring the accentuation of ‘latent physiognomy, a term used by the theorist Bela Balazs.
Expressionist intensity generates a paroxysmal vision close to a crystallisation of form, disclosing a hitherto unnoticed, mysterious realm of experience differentiated from other forms of experience by a telltale ambiguity, ‘both attractive and repugnant at the same time’. This ambiguous uncanny realm, positioned at the cultural confluence of the Gothic, the Baroque and the Romantic is the disquieting locality of those tortured souls whose psychic disposition may best be understood by combining the viewpoint of Freud with that of Hoffmann.

It was the basic proposition of The Haunted Screen that cinema – a medium at once concrete and visual – and the inter-war German cinema in particular, found ‘its true nature’ and its ‘ideal artistic outlet’ in the ethos of Expressionism as explained here. The most outstanding example of this distinctive film-dramaturgie (Balazs) is, of course, Das Cabinet des Dr Caligari based on the book by Carl Meyer and Hans Janowitz and directed by Robert Weine in 1919. Here the Expressionist treatment is at its most extreme, and the style of acting is conditioned, not by psychological naturalism, but by the studio set design intended to evoke the ‘latent physiognomy’ of a small medieval town.
The two lead actors, Werner Krauss in the role of the malign Dr Caligari himself, and Conrad Veidt playing Cesare ‘the sinister somnambulist’, managed to convey the desired mode of ‘bizarre exaltation’ and febrile energy that soon became known as Caligarism. It is known that Artaud admired Veidt’s portrayal of the somnambulistic agency of shadow, a performance that even today incarnates the very essence of catatonic horror – Cesare is an alien being ‘detached from his everyday ambience, deprived of all individuality, an abstract creature…’ who kills without motive or logic.
Moving with a particular and studiously executed gestural language through the artificial filmic environment of this paranoid scenario, and in jarring contradiction to the platitudinous realism of the rest of the cast (excluding Krauss), Veidt-Cesare embodies through his screen presence a new language of ‘reduced gesture’. His performance explores an almost linear theatrical formalism, echoing, to quote Eisner, ‘the broken angles of the sets’.
If Caligari himself is a nightmare incursion of malign, manipulative authoritarian power, it is Cesare, the agent of fate who exemplifies the notion of life as a kind of Gothic ecstasy of style. It is a style that, like the existential basis of Expressionism itself, ‘breaks the bounds of petty logic and causality’ and incarnates the immediate presence of the tortured soul.

Tweet
This entry was posted on 18 December, 2021 in homepage and tagged A.C.Evans. Bookmark the permalink.