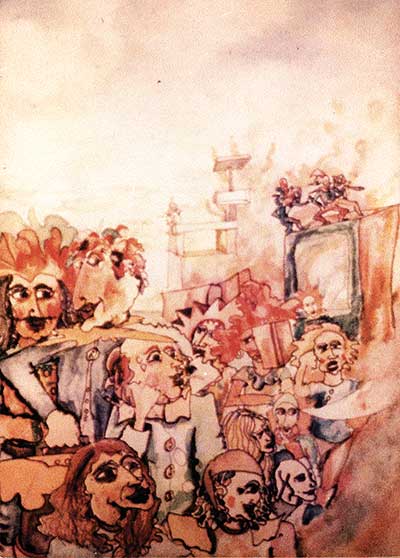 slouching down Oxford Street embracing my
starry harmony with the cosmos, the sunshine
and the gaudy tide of beautiful humanity
the pigeons pecking pizza on the pavement
rats sewer-scurrying beneath all the garbage
and the enchanted energies of the city,
when a man with a megaphone on the
Old Cavendish corner down from the Disney Store
starts haranguing me to welcome Jesus into my life
that in this world of sin and corruption only by
accepting Jesus can my soul be truly saved,
so as I pass I flip him a peace-sign and chant
‘Hari Krishna Hari Krishna’ – and he starts
following me, stalking me down Oxford Street
aiming his megaphone at my head as though
in lethal symbiosis with a photon torpedo,
‘Hari Krishna won’t save you, brother, only
Jesus who died on the cross for your sins,’
now… although disinclined to rationally debate
varieties of theological antique mythologies
slouching here bathed in Oxford Street uv-rays,
I point out that when I say ‘Hari Krishna’
I merely suggest a range of selectable optional
salvations of choice available to all, or indeed,
that with a starry connection to the cosmos,
the sacred solar beams, pigeons, rodent pizza,
and the gaudy beautiful human sugar-rush
caught within these pulsing city energies
why should we even choose to need the
imagined intervention of deities? he pauses,
hung up there on the metropolitan intersection, as
London holds its breath, pigeons cease pecking pizza,
the rats beneath us stop, to sift-sniff rancid sewer-air,
traffic slows to a halt as the sky darkens by degrees
until he lowers his megaphone, and softly sighs,
‘I’ve never really thought about it that way, thank you,
thank you, brother, for liberating my mind from the
cluttering shackles and shackling clutter of superstition,’
first we shake hands, then embrace and weep tears of joy,
as the sun deluges down its sacred cosmic rays and
the crowd around us erupt in spontaneous applause
…and readers, liberal-minded intellectuals,
poetry-lovers, literate people of the internet,
I swear the narrative here imparted
is true, and really happened,
but only… up to a point

View all posts by Andrew →
This entry was posted on 16 May, 2018 in homepage and tagged Andrew Darlington, nick victor. Bookmark the permalink.