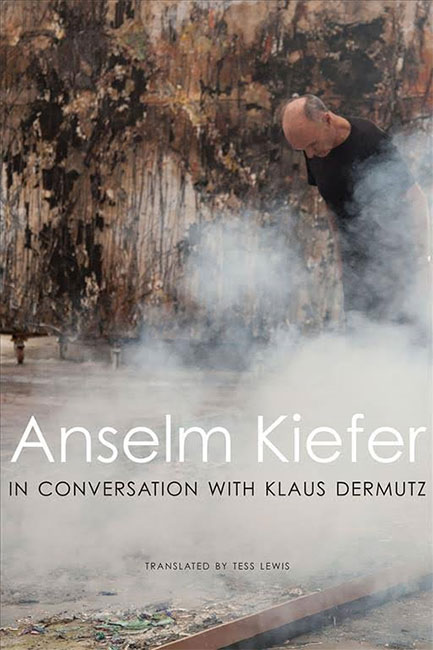 Anselm Kiefer is on of those artists who is on my radar but I have never much engaged with. I saw an astonishing show of his massive lead books at Riverside Studios, Hammersmith, in 1989 but everything else I have seen since have been self-important over-large canvasses full of stuff: sand, ash, words, straw, metal, tired and tired paint, all striving, it seemed to say something important.

This new book makes it clear that I should have paid more attention, or perhaps that Kiefer and his work should be taken seriously; for Kiefer certainly takes himself seriously. If it’s sometimes hard to see the link between Dermutz and Kiefer’s discussions and the art, the book is nevertheless intriguing in the way it moves from mysticism to symbolism via poetry and profundity.

Dermutz is a theologian (it doesn’t say in what, if any, religion) and many pages in this book cover alchemy, kabbala, gnosticism, Jewish beliefs and Christian ideas, although Kiefer says he doesn’t believe in anything, and is prone to contradicting most of what Dermutz says. It makes for a dense, allusive (and sometimes elusive) series of conversations, ones that often found me googling for many names and philosophies mentioned in the text.

What’s intriguing is that Kiefer thinks these ideas and assertions are what his creative process is based on, and seems to think if viewers pay attention to his art, then they will see its relationship to his thoughts. I’m not so sure, and prefer some of the chapters which talk about the art itself, as constructed sculpture, drawing, installation or canvas; especially in the discussions focussed on his studio complex Barjac, in the South of France. This is now a project that can be visited on guided tours, an artist’s world of towers, tunnels, rooms and chambers, sculptures and paintings; Kiefer has moved away and works in studios elsewhere now.

I’m fascinated by how Keifer often subjects his paintings to the weather, to flooding, to being covered with sand, before ‘rescuing’ them and working with what remains, but still somewhat unengaged with the way the work strives to affect and inform the viewer, to grapple with ‘big themes’ and ideas. The book is full of Kiefer’s declamations and assertions – some of which read as opinion made up in the heat of a moment, or argumentative bullshit – and the artist’s breadth and depth of knowledge is clearly part of a public persona the artist has created. I’m reminded of Joseph Beuys and his story about being rescued by nomads who used fat and felt to keep him safe and warm, thus legitimising and making sacred his chosen materials.

Kiefer weaves a supportive web of mystical and mythical ideas around his own art and materials, offering up knowledge he claims to entirely disbelieve in but which gives him a structure to navigate the world around him by. He talks of formative childhood moments, theatres, renewal, language, spirit, music, landscape, numerous authors and their writing, secret knowledge, the potential of empty spaces, and what art might achieve. It’s an exhausting, exhaustive, challenging and fascinating book, that offers unusual insight into the way an artist’s mind can work.

Tweet
Tweet
This entry was posted on 1 October, 2022 in homepage and tagged Anselm Kiefer in Conversation with Klaus Dermutz, Rupert Loydell. Bookmark the permalink.

One Response to Unusual Insight