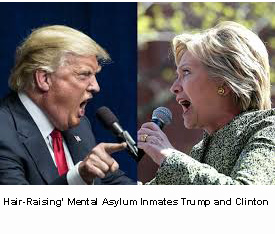 US lunatics, euphemistically termed ‘citizens’ by their international banker owners, are preparing to elect the next manager of the mental debt asylum formerly known as the the United States of America. Fellow inmates H. Clinton and D. Trump complete the hair-raising competition making the fleeting regime organised by wild-eyed Jack Nicholson in ‘One Flew over The Cuckoo’s Nest’ seem preferable with regard to running the crazed superpower.

Being so utterly psychotic, contradictory, delusional and prone to bouts of severe paranoia, xenophobia, kleptomania, megalomania and congenital lying, whilst also suffering from dementia caused by years of heavy medication and its associated illnesses, it was pointless asking the candidates for their own opinions so we tracked down a trained psychologist to find out what could be going through their heads.

“Of course, they are so mad there is no way of ever knowing,” said trained psychologist Temo Reichstag from the International Neurological Youth Research Hospital for Endangered and Demented Diplomats (I.N.Y.R.H.E.& D.D.) “You don’t have to be a trained psychologist to work out both inmates Clinton and Trump are as mad as suitcases made out of jam with sausages for handles. Fortunately the other 350 million nutjob debt slaves roaming the corridors of the asylum are far too mad to notice or to spend five minutes on their smart phones researching the Corporation Act of 1871 to find out that their, so called, elections are complete madness in themselves and have all the constitutional significance of a fly turd.”

International bankers A and B leaked a press release through their P.R. company The Associated Press stating that they were ‘happy’ with current levels of madness within the chattel asylum and wished the respective candidates ‘luck’ but warned that there could be an unwanted ‘spike’ in lunacy rates should inmates mistakenly take up Dr. Reichstag’s advice and misuse their smart phones.

This Is Political Madness – Hillary Clinton: Inside the campaign scandals and corruption exposed on …

One flew over the cuckoo’s nest – Trailer – HQ 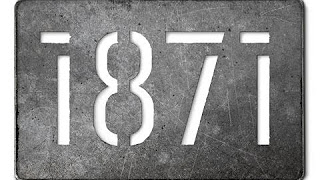 The Act Of 1871 – The UNITED STATES is a CORPORATION – YouTube

Since the Act of 1871 which established the District of Columbia, we have been living under the UNITED …

View all posts by Ethan →
This entry was posted on 22 September, 2016 in homepage and tagged current affairs, Ethan Harrison, politics, satire, Social commentary. Bookmark the permalink.