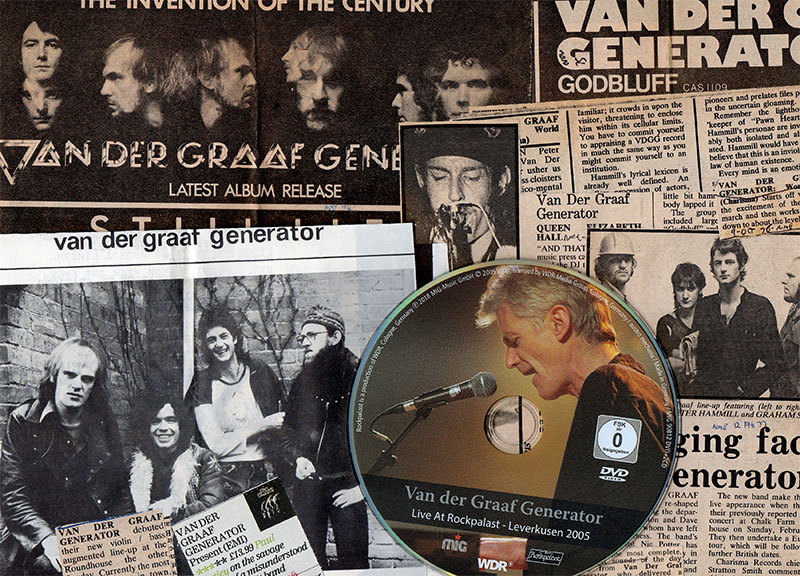 Music academics still debate Prog. Was it a temporary aberration brought on by dizzy ambition and overblown egos, or was it the genuine apex of Rock creativity. For Peter Hamill, the slightly-built ‘Thin Man’ and his cronies on stage now, it comes as natural as breathing. Let’s construct the dialogue, let’s open the debate…
.
The predominantly male Leverkusen Jazzfestival audience instantly respond to the raspy flute opening of “The Undercover Man”. Bespectacled David Jackson blows things, doubling sax in ludicrous hat, a sheriff’s star on his leather waistcoat, denoting token sartorial extravagances. Solid heavyweight Guy Evans on huge drum-array resembles the Club-Bouncer who checks your guest-list status and refuses you entry. He punches out sharp martial kicks to “Scorched Earth”. Hammill himself, in loose open-neck blue top, looser white pants and neat white hair, closes his eyes in concentrated intensity, adding Yamaha DX7 keyboard textures to Hugh Banton’s Bach-like organ tones. Hugh’s in sensible blue striped shirt, sleeves folded back to signify workmanlike attitude. This is not easy listening. No-one dances. This is clever stuff made up of wilful quirks. ‘Leave the past to burn’ he emotes, as tectonics shift in slithering continents of dense musicality.
.
‘Danke schön’ says Hammill, later announcing ‘from me, on my (57) birthday.’ Feel the force! Wasn’t he ‘The Last Jedi’? No – that was Mark Hamill. “Every Bloody Emperor” constructs insurrectionary street-barricades of human nature against imperial corruption in libretto-screeds for four-piece orchestra. Thoughtful. Intelligent. Then Hammill skews guitar-distortion into “Lemmings”, plectrum cutting discordant shreds that dice vocals into energy-jolts. He poses the existential equation ‘what choices are left but to die?’, fed on avant garde Kraut-Rock kinetics set to maim. Taking 13:57-minutes of manicured noise that resolve from prognosis to diagnosis into ‘what choice is there left… but to live?’
.
For the swirling cosmic imagery and hoarse articulations of “Darkness”, his arms flail like a disconnected David Byrne, until he strolls back for the instrumental fireworks to mesh, all pulling in apparently opposite directions yet still staying immaculately attuned. Jackson plays alto and tenor double-sax Roland Kirk-style. Until Hammill interprets the “Childlike Faith” lyrics in narrative form, in inner dialogue, a stream-of-consciousness voice acting it out in thespian modulation of greater expressive range than you might expect. ‘Time and space hang heavy on my shoulders’ maybe, but with brain engaged. One of three titles tonight from their live ‘Merlin Atmos’ (2015) set. And there are several duplicate titles from their ‘Real Time’ (2007) live at the Royal Festival Hall play-list. No playing down to the crowd. No easy options. 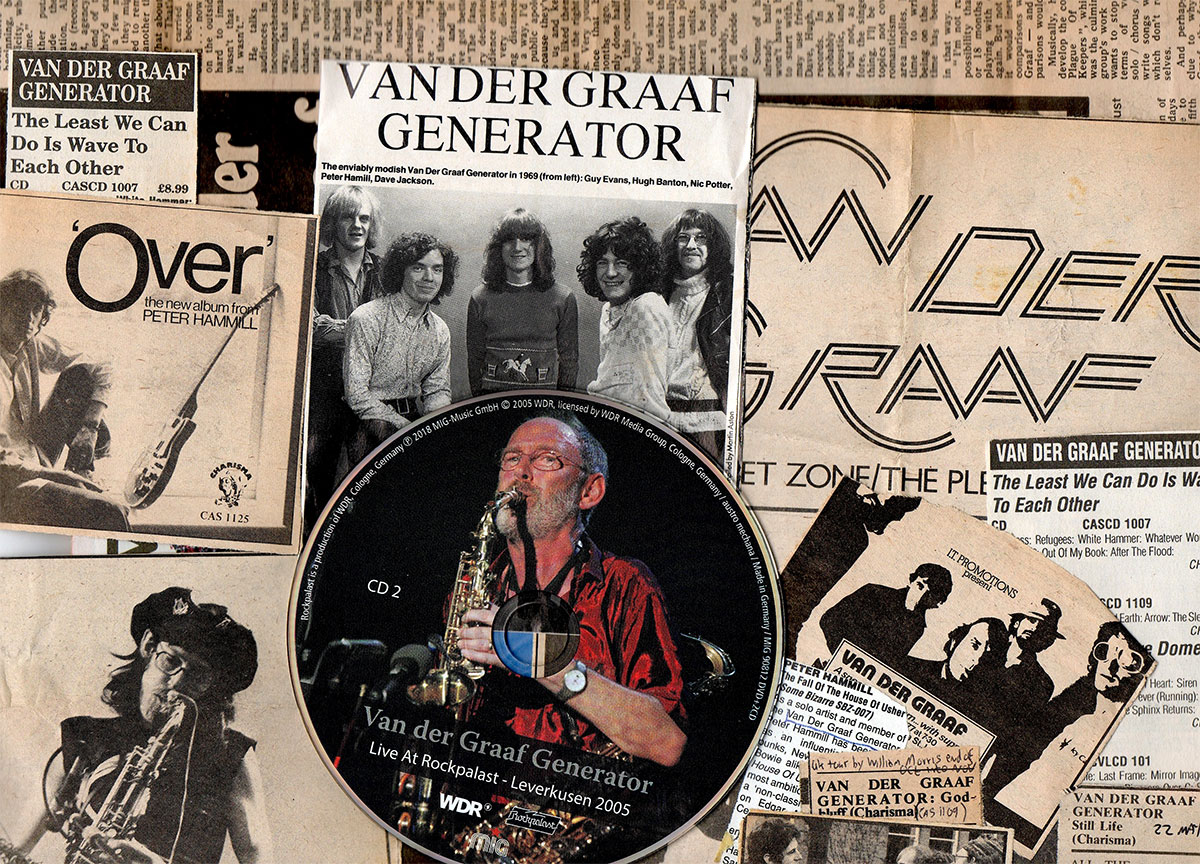 .
Formed at Manchester University in January 1968, Van Der Graaf Generator became the first signing to newly-launched Progressive label Charisma following a geographical relocation to London. What had started out as a Hammill solo project subsequently became a contractual opt-out issued on Mercury as ‘The Aerosol Grey Machine’ (September 1969) under the Van Der Graaf Generator flag of convenience, making ‘The Least We Can Do Is Wave To Each Other’ (February 1970) the first proper group album. Featuring “Darkness (11/11)”, as well as all four members present at Rockpalast – plus bassist Nic Potter, it made considerable inroads into what was then hip credibility awareness. “Killer” is the opening track on ‘H To He, Who Am The Only One’ (December 1970) – the esoteric title referencing the hydrogen-to-helium nuclear process powering the energy of the sun. Although Nic had quit in summer, and plays on just three of the album tracks, Robert Fripp adds guest guitar to one track (“The Emperor In His War-Room”).
.
Unlike – say, Genesis or Lindisfarne, the Charisma label-mates they tour with, there were no catchy singles-edit to carry their visibility into the Pop charts. Nothing as vulgar or as tediously obvious as a hit. There was nothing you could whistle, but they build up solid and enduring audience-loyalty, particularly across Europe. “Man-Erg” was salvaged by Band Of Joy records from a BBC Radio One ‘Sound Of The Seventies’ session (first broadcast 10 June 1971), for the ‘Maida Vale: The BBC Radio One Sessions’ (issued June 1994). And they play the ‘Weeley Festival’ in August 1971 on a bill alongside such luminaries as King Crimson and Colosseum with headliners T Rex, before “Lemmings” became track one side one on ‘Pawn Hearts’ (October 1971). There are only three long tracks. ‘Wrongly bracketed with the posh-Prog of Yes, ELP and Genesis, VDGG really just went further out there than their peers’ opines Paul Morley.
.
After a split the line-up reconvene for the self-produced ‘Godbluff’ (October 1975) with “The Undercover Man” and “Scorched Earth” forming side one, and “The Sleepwalkers” closing the set. The minimalist sleeve-art is the first to use the triangular ‘V’ symbol that members of the Rockpalast audience can be seen brandishing. “Childlike Faith” came from ‘Still Life’ (April 1976), while “Wondering” debuted on ‘World Record’ (October 1976), before they cease trading.
.
They don’t stay still. But no phase is totally removed from the next, or the ones it precedes. A group, but no longer a group. ‘Not so much a band, as a meeting place,’ with independent ventures. ‘The Long Goodbye’ trio without Hammill. While, among the DVD bonus features there’s a trailer for a younger more guitar-heavy Hammill with his K-Group filmed at a 1981 Hamburg concert, doing “Sitting Targets” during a foray of solo ventures. ‘Total satisfaction is the death of music’ Hammill tells journalist Roy Hollingworth, ‘yet there is satisfaction in seeing people dig it now’ (‘Melody Maker’ May 1971). ‘There’d been a strong feeling of unfinished business’ comments Jackson. ‘First came a ‘what-if?’ get-together for a week’ and it was ‘out of the recordings of these sessions came the album.’ The classic line-up together again for ‘Present’ (April 2005) bringing “Every Bloody Emperor” and “Nutter Alert” into the set.
.
There’s choppy soft-loud fragments for “The Sleepwalkers” that ‘cut the air’ with a scrawny shoulder arm-slash, Hammill flaying his larynx into coruscating barks, brays and voice-breaks, his voice an acerbically dissonant instrument in its own right, the ‘if only I had time, but soon my time is ending’ lyric tipping into falsetto emphasis. Jackson is be-strung with horns, his jumpy sax feeding just enough rasping discord to provide hard edges into the ivoried keyboard passages. Drenched in blue spots, horns and guitars propped on the back-stage riser. Then the running free-playing jazz-literate core of “Nutter Alert”.
Slowing down to soothe ‘the tempest in my mind’ of “Man-Erg” in steep descents into minor key, before the one-man horn-section kicks it into a controlled madness of tempo-shifts pointed up by jazz-savvy drums. A topography of changes that soar into lyrical melodic flight, where virtuoso oloing is sacrificed to ensemble playing – ‘I know I’m not a hero… I’m just a man.’ For there’s no ego-indulgent soloing, they’re never less than a coherent unit And “Killers” – the closest to a thickly-chorded riff-structure, heavy and vibrating. Fleshing the lyric bones, albeit with lavish embellishments, it pounces, prowls, dives and bites, as Hammill bleeds himself dry. Swaying ululations of flute in noodling circles around ‘that irrational pain, this ridiculous brain.’
.
‘The Leverkusen concert came near the end of our 2005 reunion touring’ comments Evans, ‘by which time we were feeling comfortable on stage again.’ Their only filmed full-concert document, the sound is studio-quality, crisp and razor-sharp. The lighting and camerawork faultless. In another universe, Punk lauds its uncompromising stance. Yet Van Der Graaf took uncompromising into new definitions, particularly when critical opinion turned away from their intelligent complexity. They persisted, and persist, in the marginalised uniqueness of their own cottage industry. A dichotomy on a paradox-drive. No obvious limits, recognising no foreseeable barriers. A continuum without walls, executed with fiery flash. This is also sonic extremism. Was rock ever meant to be like this? Does it matter? It’s immense. 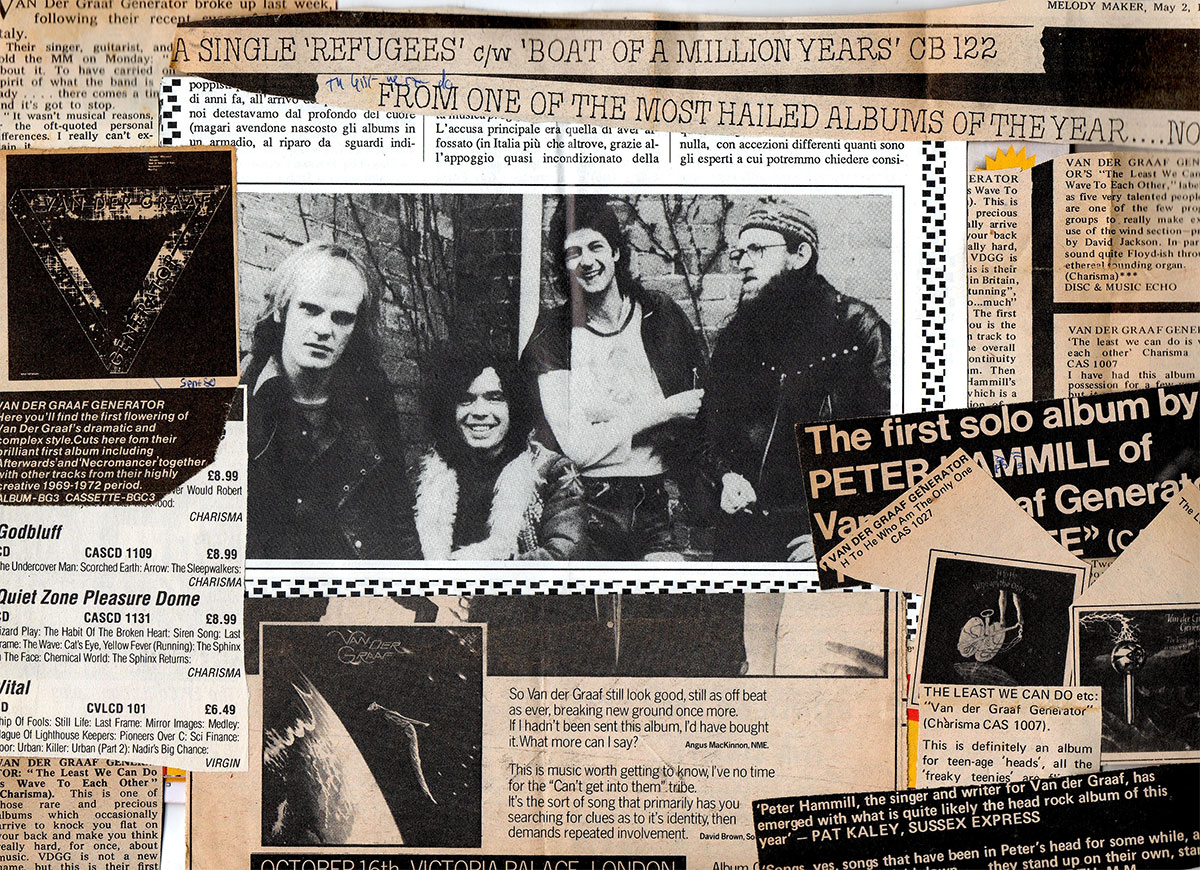 Other trailers include John Cale doing ‘Waiting For My Man’ (1983-4), Blue Cheer ‘Parchment Farm’ (2008), plus Tito And Tarantula, Epitaph and Peter Pankas Jane

View all posts by Andrew →
This entry was posted on 29 August, 2018 in homepage and tagged Andrew Darlington, Van Der Grahh Generator. Bookmark the permalink.

One Response to Van Der Grahh Generator: ‘The Undercover Men’