Posted on 7 May, 2022 by Lawrence Freiesleben Alerted to the upcoming May Day march (on 30th April) taking place in Lancaster and able to escape from the on-going building site at home, I set off last Saturday to cycle to Dalton Square, angrily enthusiastic to take part. 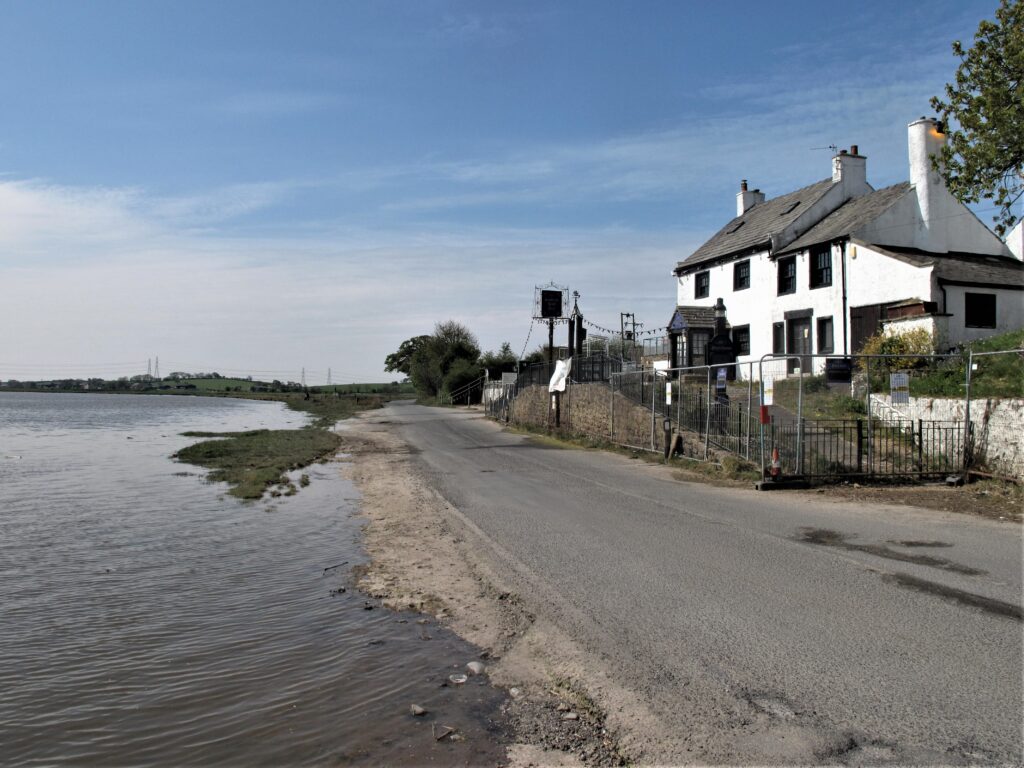 On a bike it’s easy to reach Lancaster from Morecambe avoiding main roads, and sections of my indirect route, especially from Overton coming in along the northern bank of the Lune were almost entirely deserted. Passing the fenced-off, covid-abandoned Golden Ball at Snatchems – a name derived from the frequency of press gangs[i] snatching drunk men from the famous inn to serve in the Navy [ii] – the tide was almost on the road. 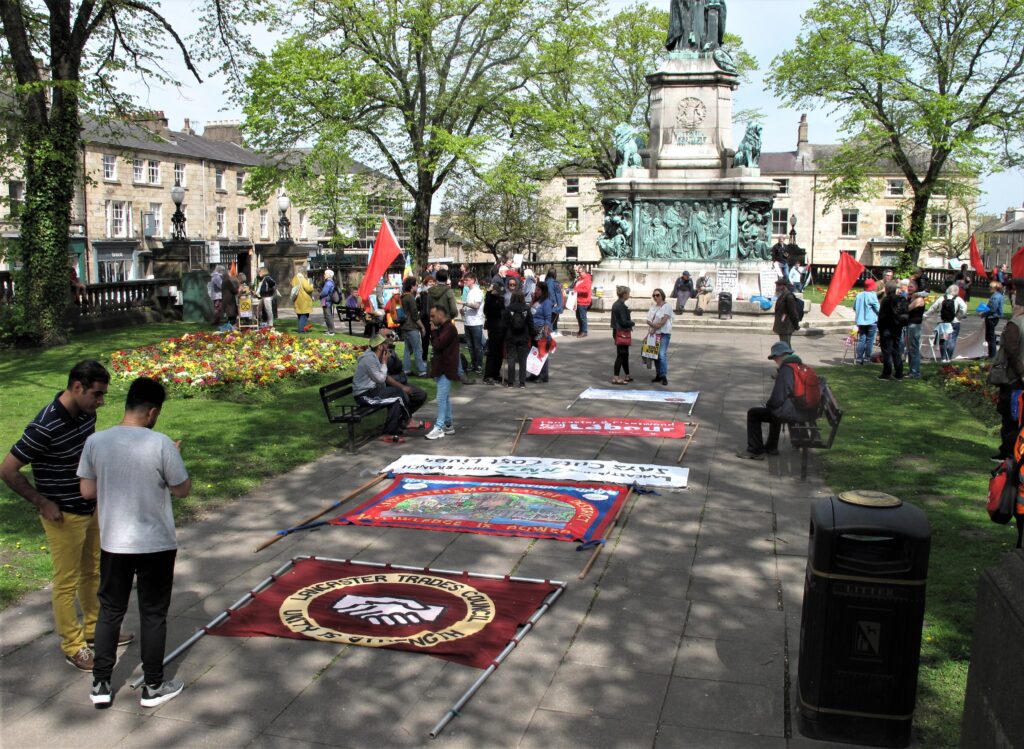 With an early summer sun illuminating the flowerbeds of Dalton Square, the surface mood was inclined to festival, despite a palpable fury beneath. How have things got so bad that we can let such a blatantly corrupt Government get away with every malevolent scheme, slimy manoeuvre, and callous stunt their hare-brains can whisk up? A question asked or implied by virtually every speaker to take the microphone following this Labour Day march. 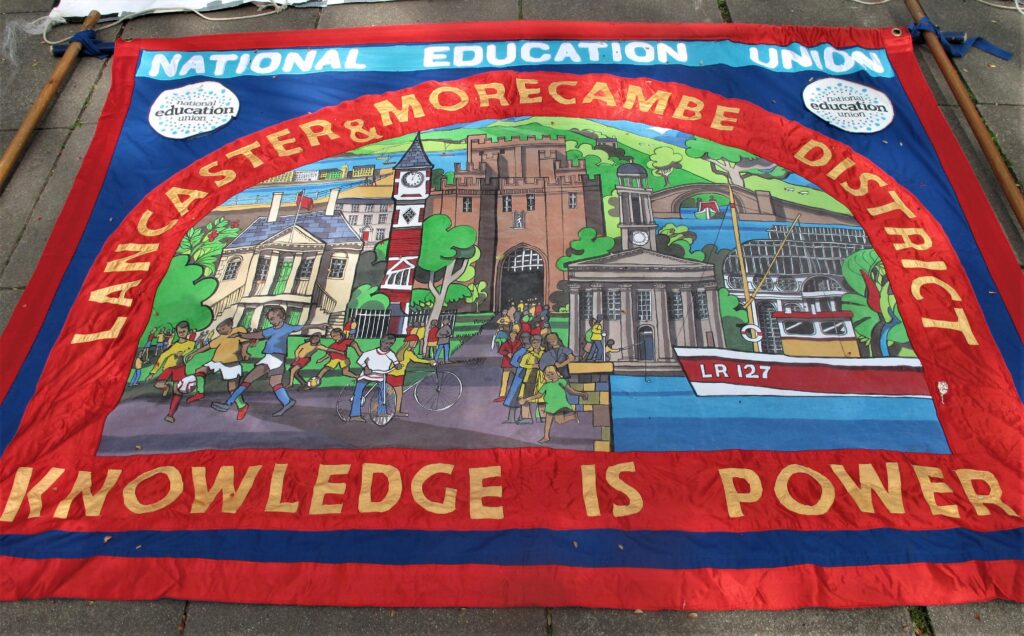 There were so many strands being woven together at this rally[iii] – a headteacher blasting the inequities and failures of Ofsted, a maritime worker consumed with rage about P & O’s sacking of 800 workers via a zoom call – that I won’t be able to do justice to every thread. But it is the overall arc that is important: the lesson of unity we must relearn after the gradual erosion of Trade Union defence and encouragement during the last 40 years. The truth is we have let the privileged heritage classes – self-seeking zombies and tyrants who implement the pus of neo-liberalism frequently without having the intellect or conscience even to question why they are doing it – walk all over us. Along with their pals in global corporations and offshore tax havens, their most common opium (or carrot of persuasion), has been consumerist materialism. We have been whitemailed into silence[iv]. Becoming gradually heavier, their bludgeons meanwhile are fashioned from undemocratic laws such as the Police Crime and Sentencing Bill. Laws they fabricate and pass for themselves. Yet all too many who will suffer from the woeful incline we are now tipping down, out of control, voted for the half-witted, avaricious bastards! 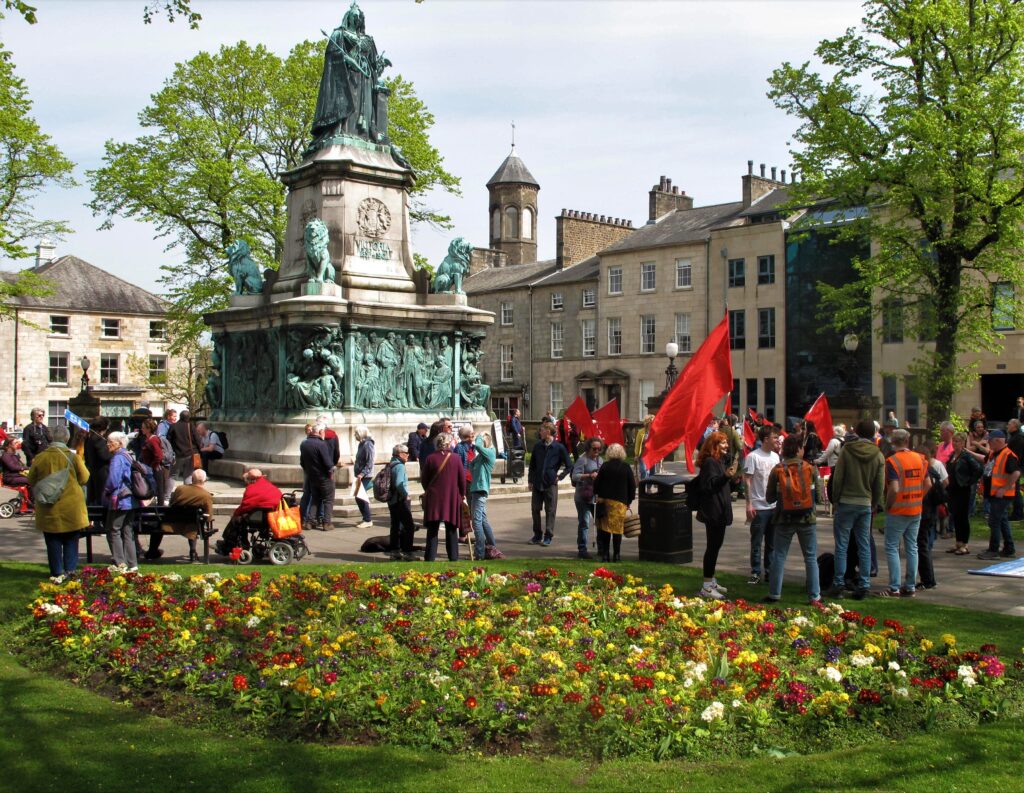 Lancaster as a City of Sanctuary[v] has been very vocal in its welcome for asylum seekers – several of whom were among the marchers. This concern, along with the evil idiocy of the one-way ticket to Rwanda plan[vi], and the pitiless Nationality and Borders Bill[vii] was prevalent throughout the day. 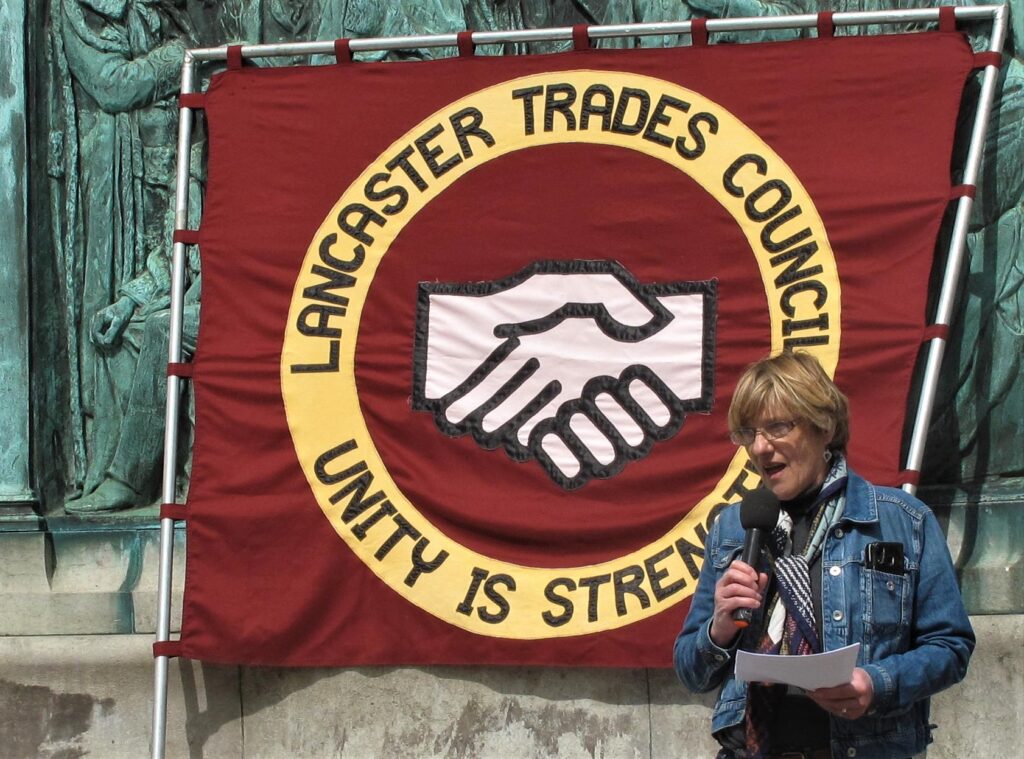 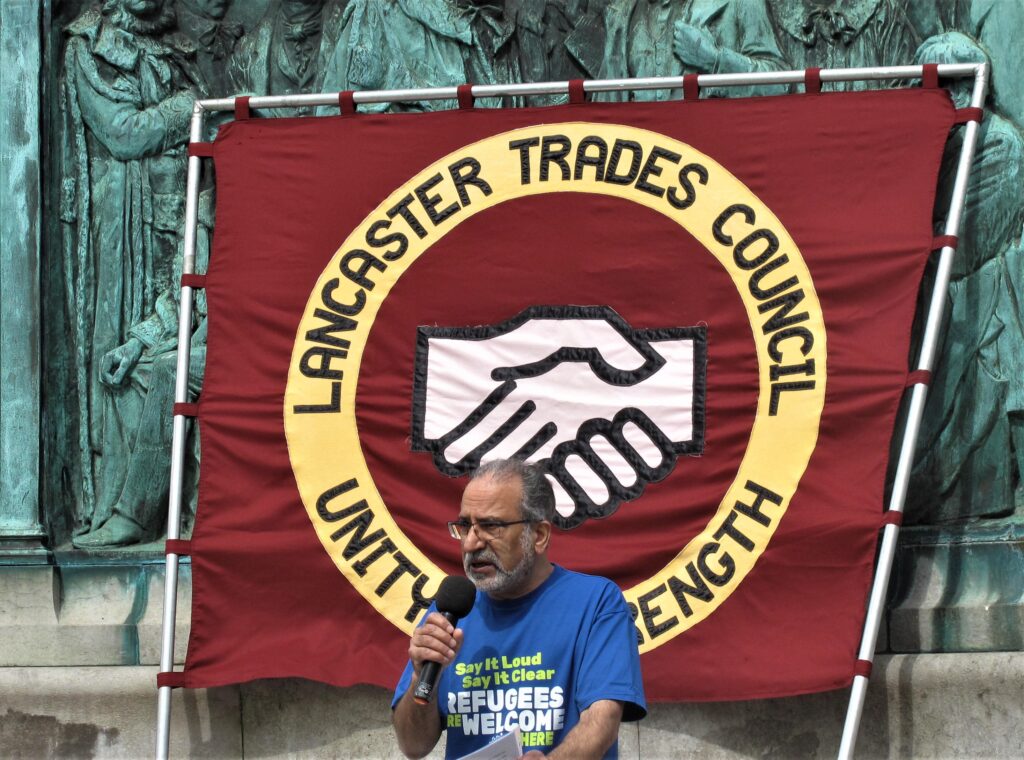 Sam Ud-din, Secretary at NEU – emphasising the message on his shirt and much more besides

As several speakers made clear from different angles: We have had enough! Due to the passive drift of the last few decades, we need to fight ten times harder than before to avoid losing everything. And we have to fight now! 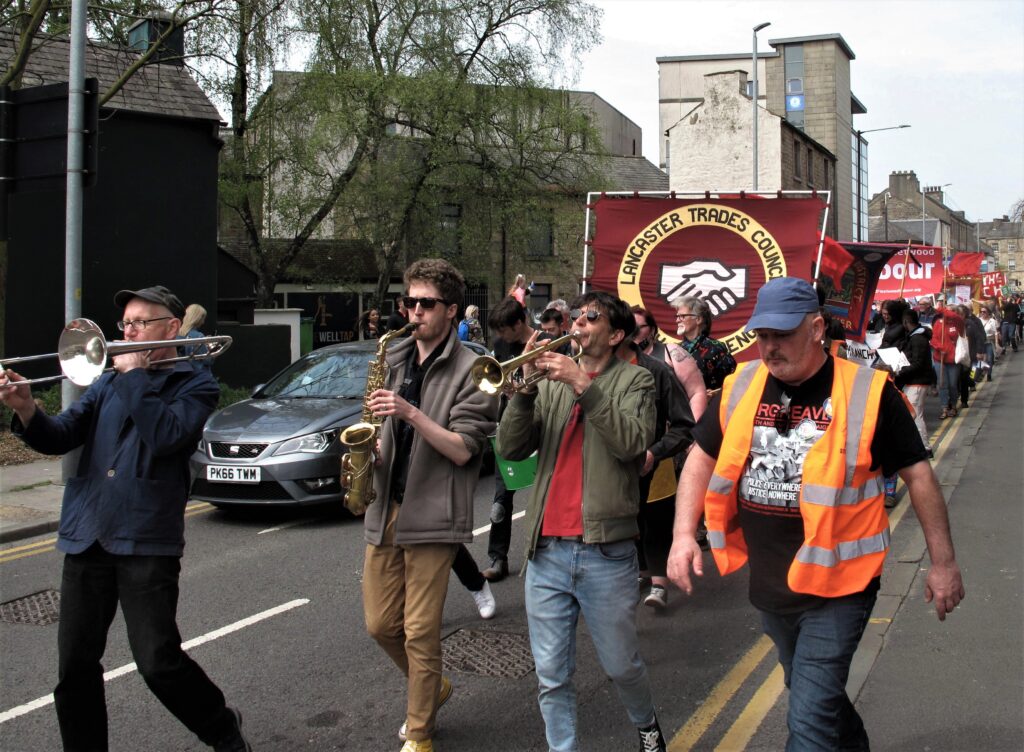 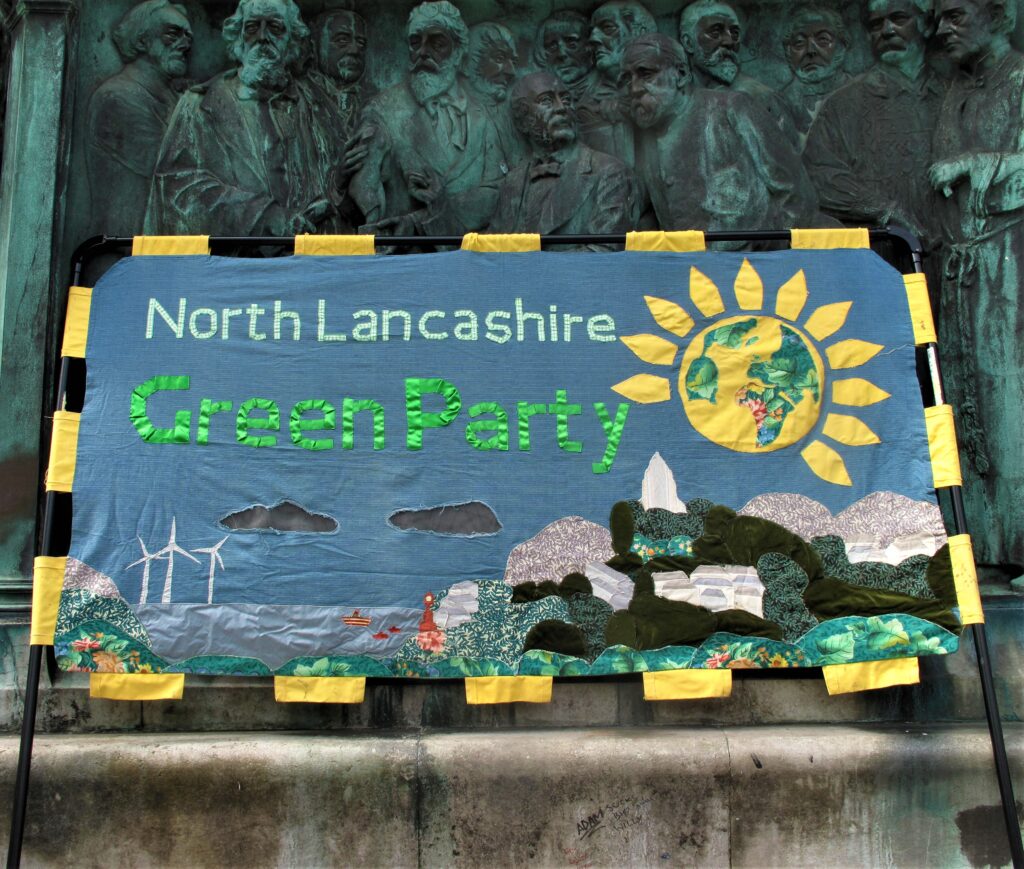 Fight to prevent catastrophic climate change and a future off the scale.

Fight to prevent the haemorrhaging of money on an ever-more futile stockpile of nuclear weapons[ix]. 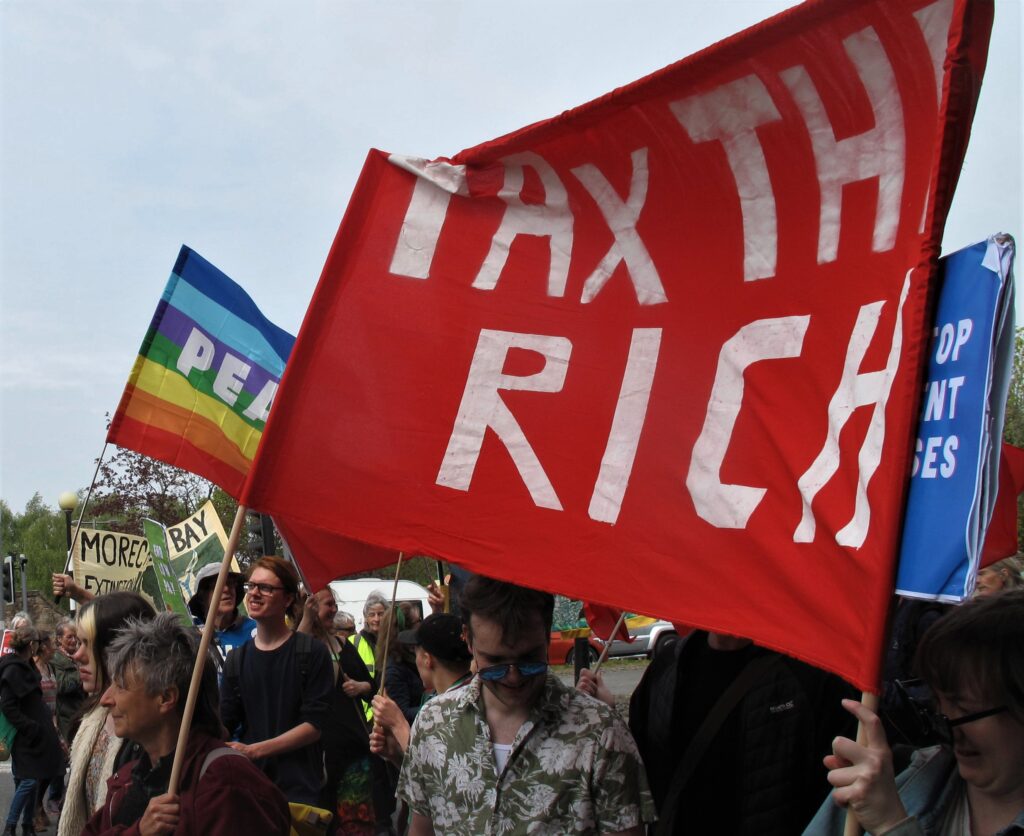 Fight to make the rich pay[x] for the covid debacle made (deliberately) worse by Boris and his ineffectual fumbling. 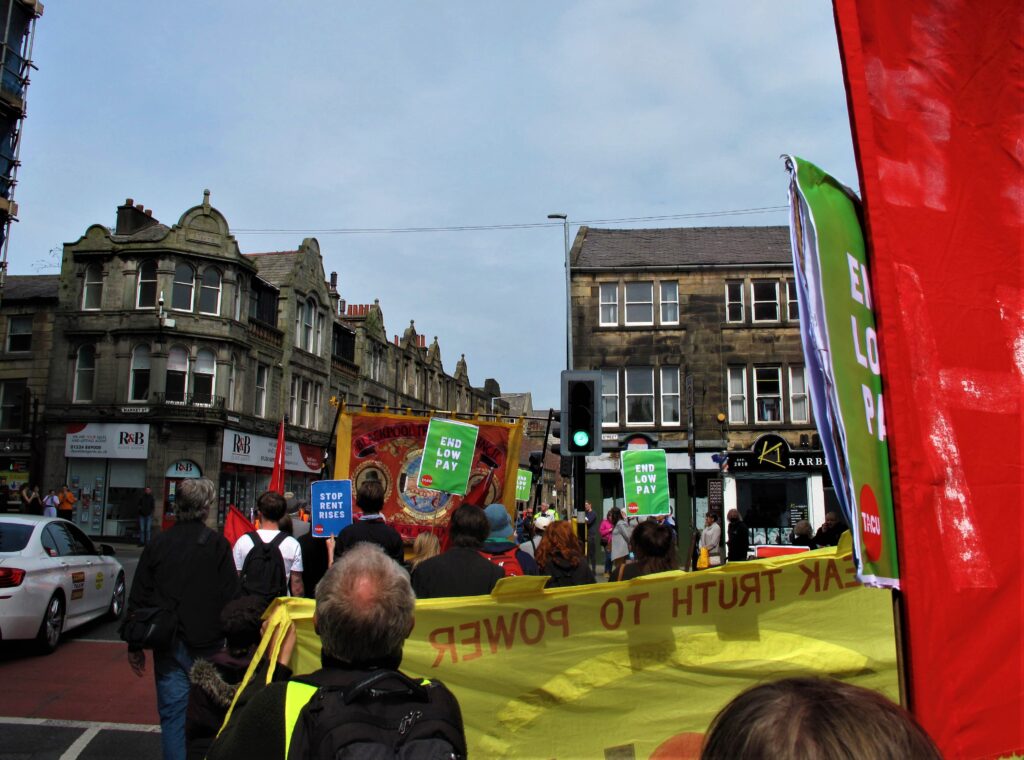 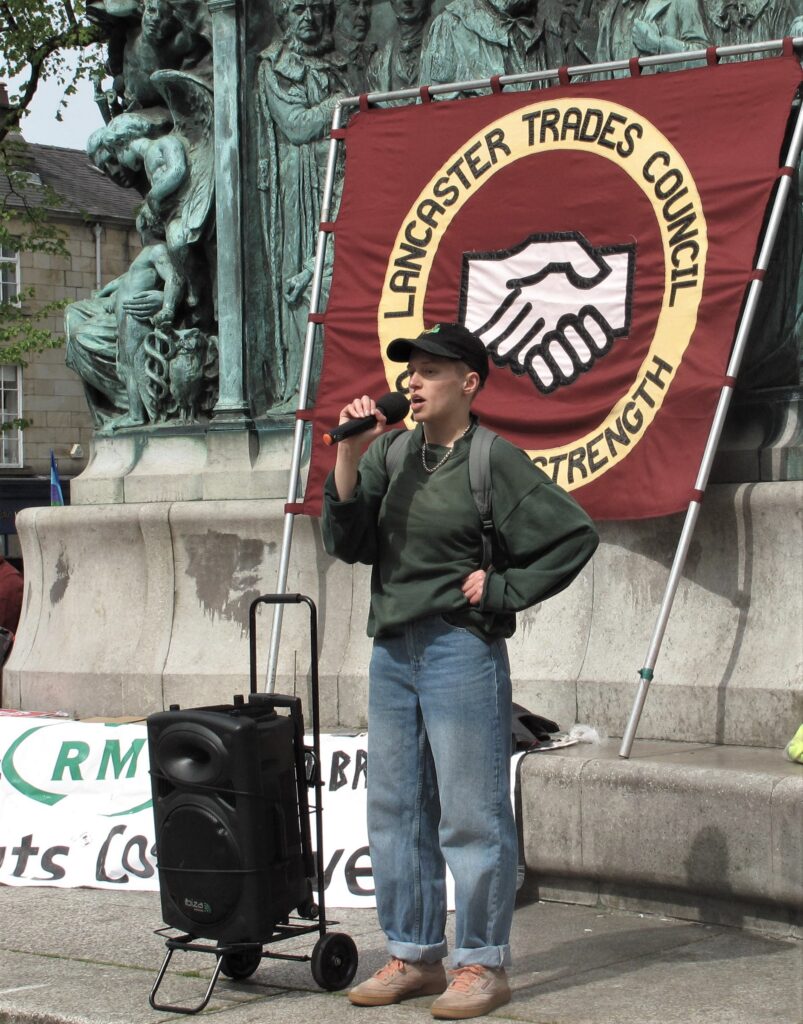 Fight to save the NHS and against the exploitative landlords “screwing over” students and tenants – to quote Anna Oates-Monger (above) speaking for TaCU[xi]. 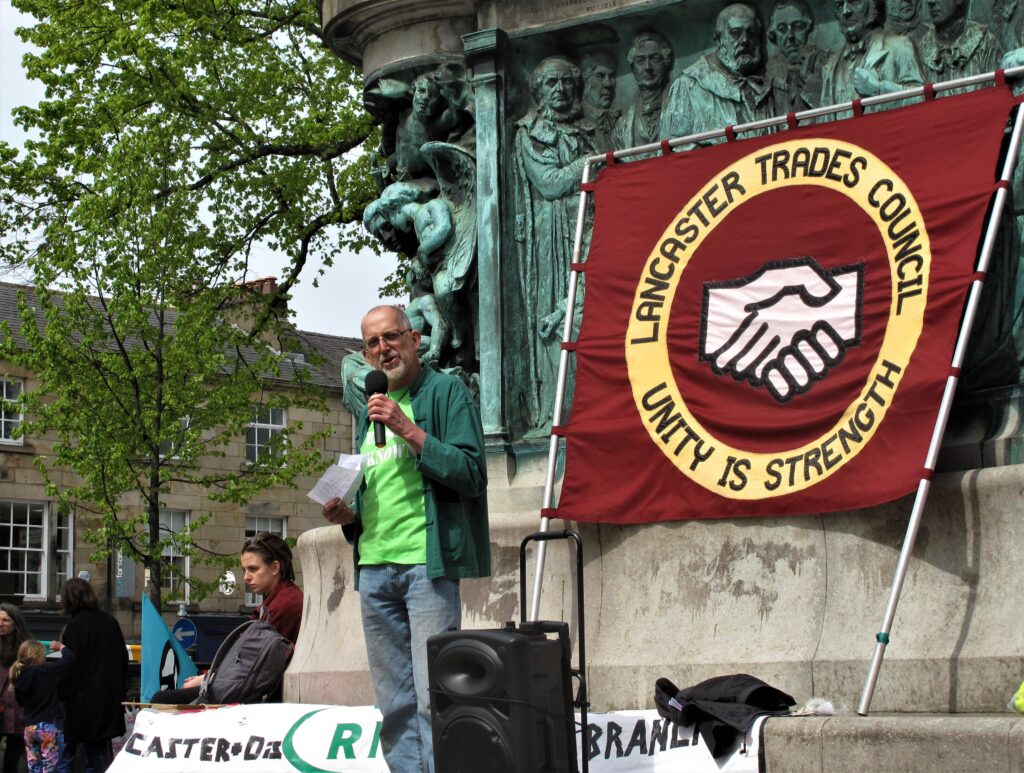 Fight to stop the oil companies and all the other vested interests from destroying the earth for the benefit of a handful of (doomed) shareholders. Fight against militarism – which as Philip Gilligan stated in his speech “removes any chance we have of achieving social justice or tackling the climate emergency”. The list goes on, there are simply too many threads to mention, and all must be woven tightly together, minor differences bypassed – it is the overall arc and arch we must form! 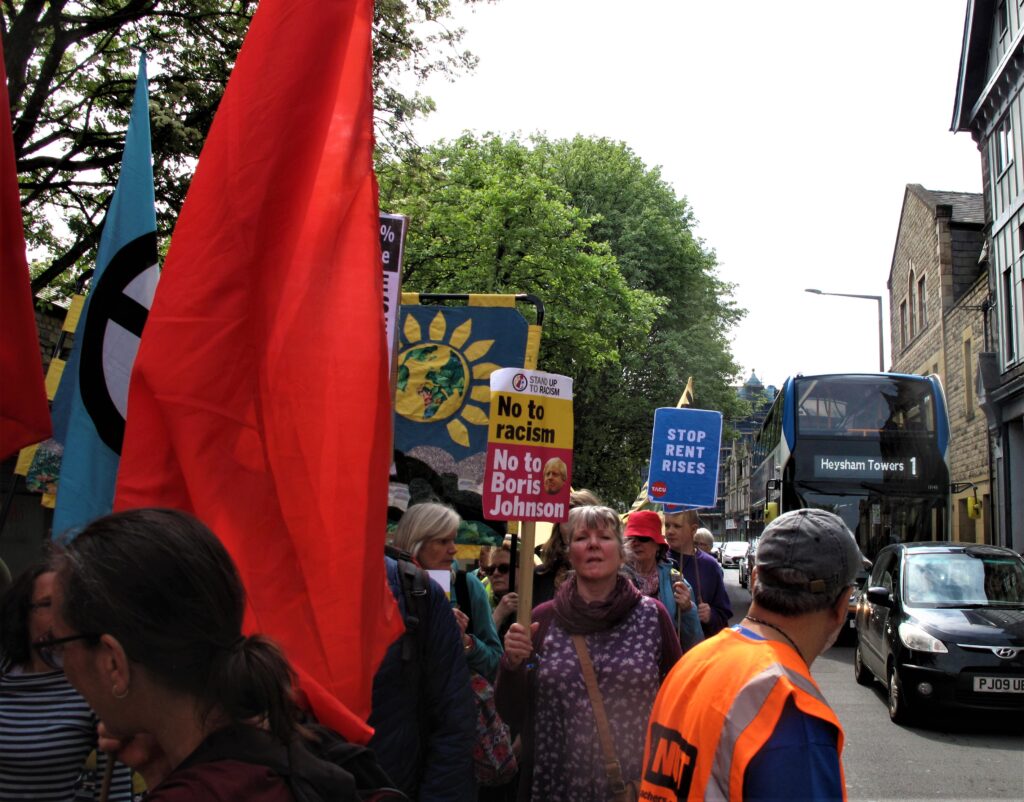 “The Lancaster and Morecambe May Day march is always inclusive of everyone. It is a peaceful celebration of workers’ struggles locally and internationally. It is a celebration of unity and solidarity.” So the words of a spokesman ran in the Lancaster Guardian a few days back[xiii]: “This year it is as important as ever to demonstrate our democratic right to protest without which many of our rights and freedoms would not have been won.” 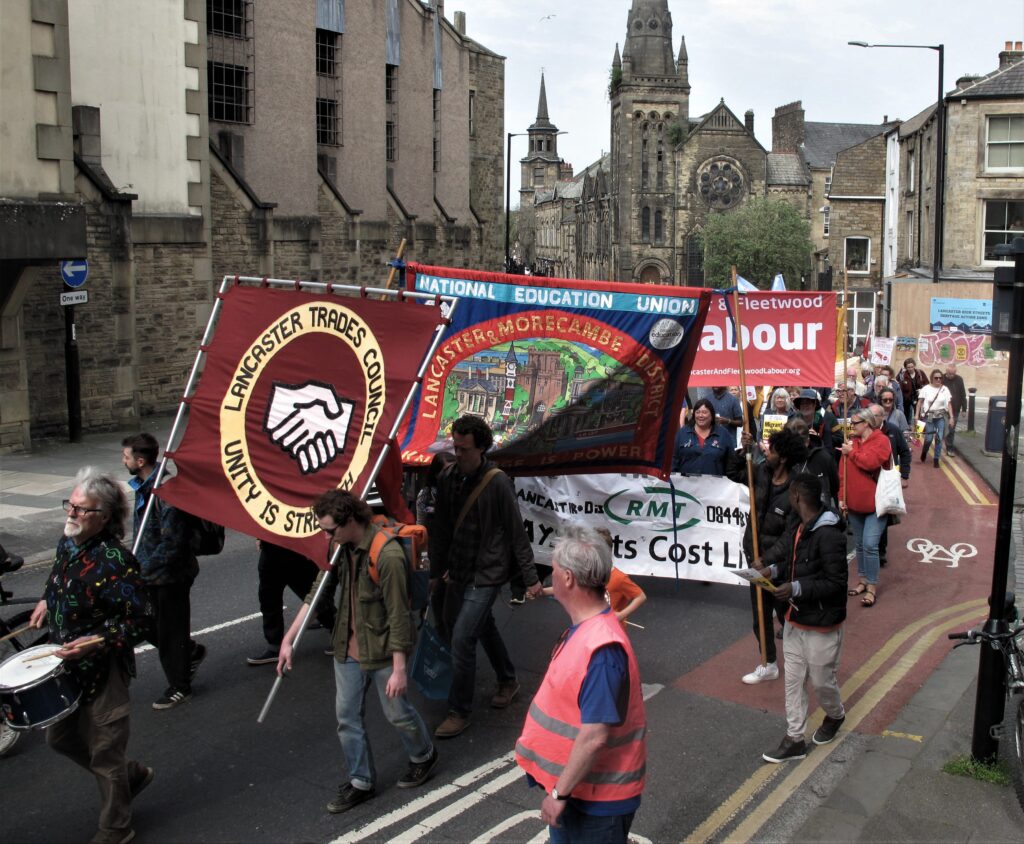 Because of the way society is going, like no doubt thousands of others, I have frequently got to the point of finding it impossible to care anymore. Of retreating into silence. Unless we can turn things around drastically in a matter of 2 or 3 years[xiv], human society does not deserve to continue. 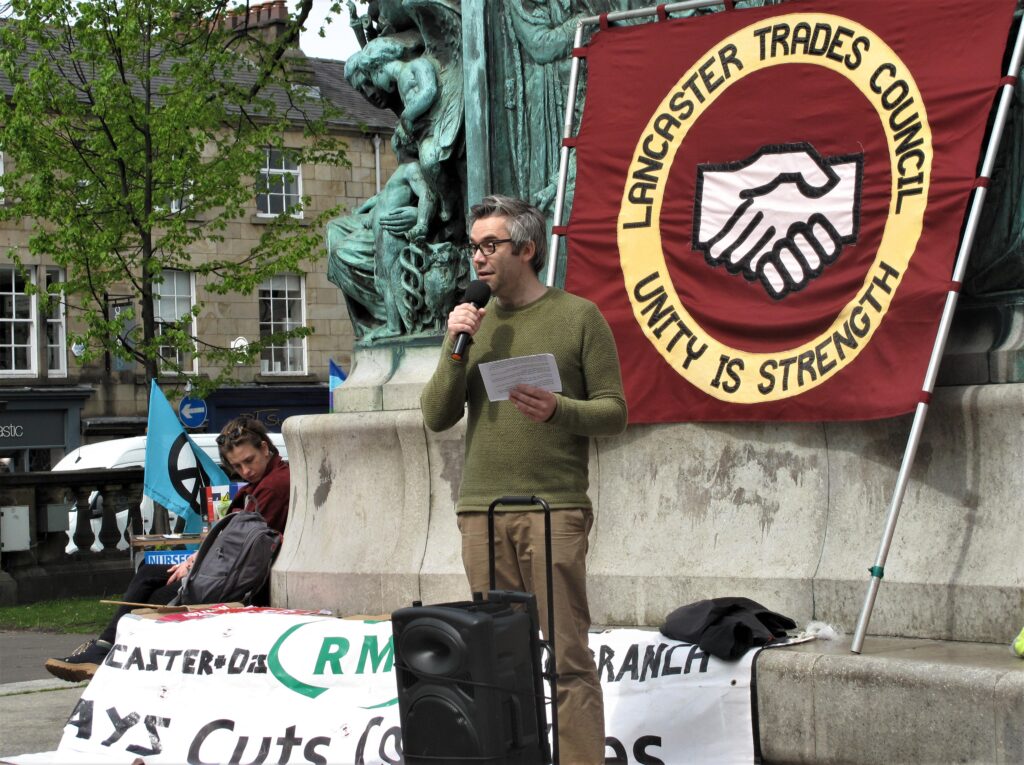 An untiring conductor of chants shouted himself hoarse . . . “UNEMPLOYMENT AND INFLATION ARE NOT CAUSED BY IMMIGRATION. BULLSHIT! COME OFF IT! THE ENEMY IS PROFIT!” as we marched around the city centre, cheered and tooted in friendly fashion by motorists and pedestrians. More cautious spectators appeared to watch incredulously – as if expecting any moment to see us all swept off to prison. Several bystanders were also filming the parade – resigned perhaps, bound by their material consolations – as if this were the last demonstration before dystopia descends . . . 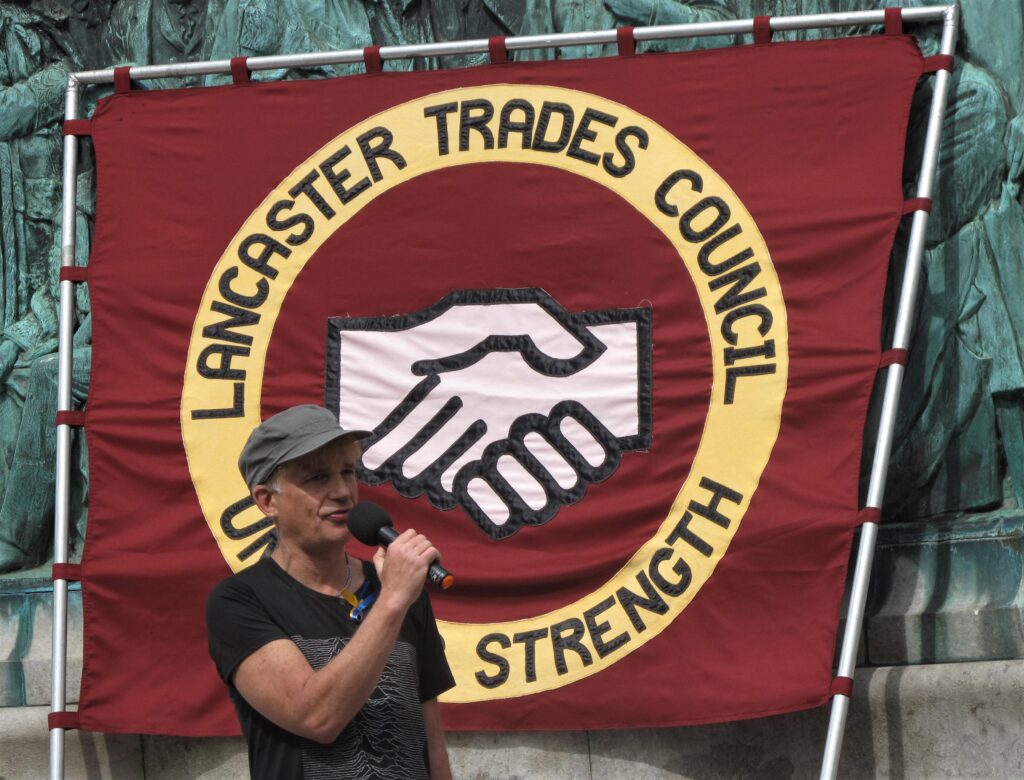 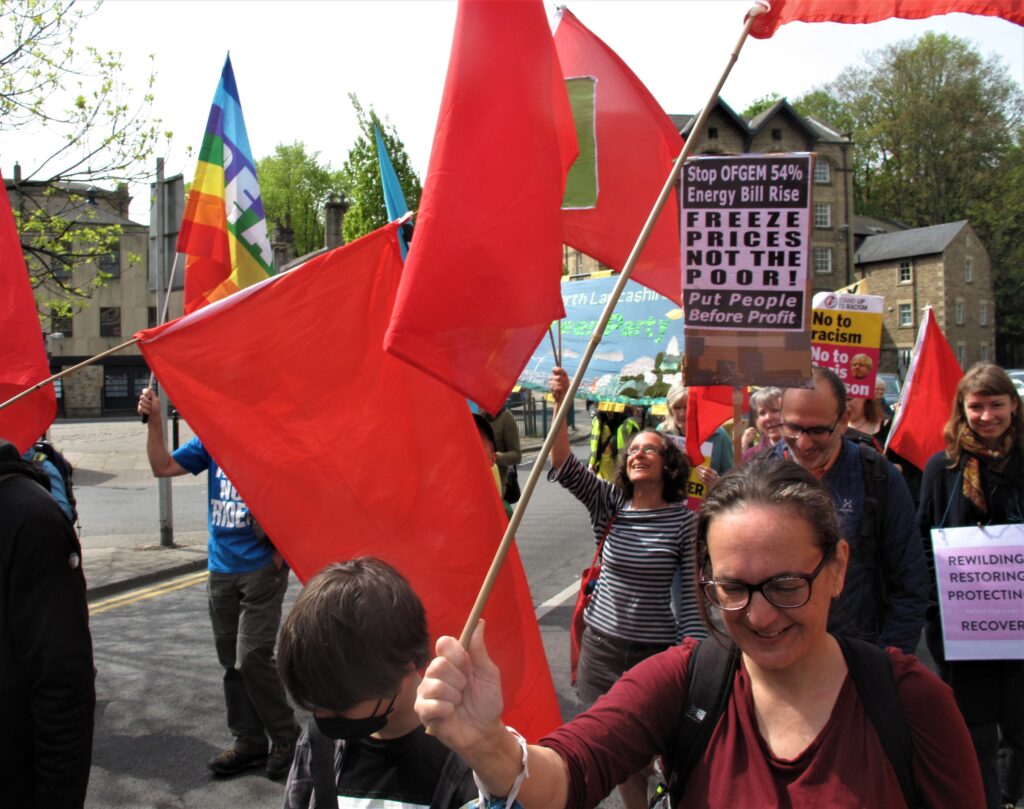 But I was feeling quite the reverse. More than a celebration of unity and solidarity, at times there was the definite tone of incitement to an uprising – or to the revolution we so desperately need. 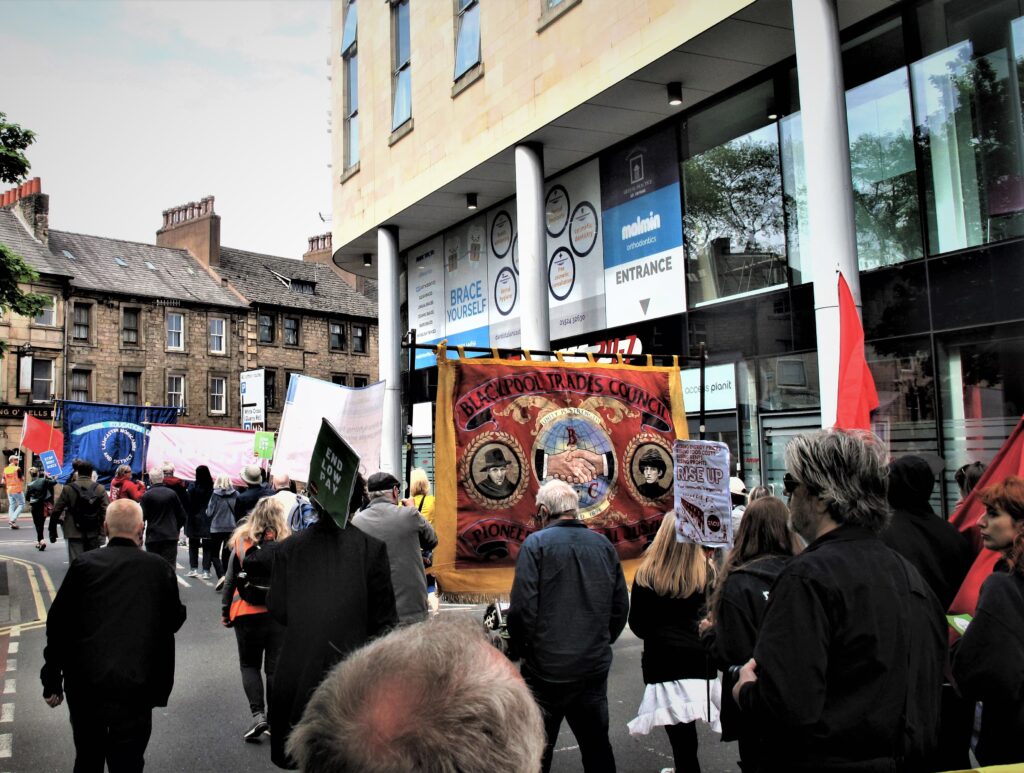 The reciprocal support of Blackpool Trades Council was greatly welcomed. After such an inspiring day, my despair about human society has to be amended. Of course, the best of it deserves to continue – but only for those who are enemies of environmental destruction, social injustice, militarism and profit.

[i]  Sounds like an original Tory idea and no doubt some unthink-tank will stumble upon the idea soon and congratulate themselves upon its originality. More seriously: https://en.wikipedia.org/wiki/Impressment

[iv] From New Year Resolution: the Rebirth of Conscience, January 2021: https://internationaltimes.it/new-year-resolution-the-rebirth-of-conscience/  “Now, with the apparent exception of the type of sentimental lip service we currently pay to honouring key workers and the NHS[iv], it seems that outside of individuals, conscience is moribund unto extinction. For forty years at least we have been in dire need of a revolution. But society has long encouraged the private feathering of nests. Our material desires have become a habit we can’t kick. We have been whitemailed into silence. All radical change, all serious equality postponed or cancelled. Meanwhile, the divide between rich and poor only widens.”

[ix] To quote from local CND campaigner Philip Gilligan’s speech: “not only does the UK Government continue to squander billions on Trident nuclear weapons of mass destruction, it is also intent on squandering ever more billions on developing an even more dangerous and destructive system.

In March 2021, the Government’s Defence Review also announced the provocative and dangerous decision to increase the UK’s nuclear weapons stockpile by 40% and to change other related policies – announcing that it now reserves the right to use nuclear weapons in a wider range of circumstances and ending transparency about the number of nuclear warheads or missiles deployed.

And now it seems that they are keen to have US nuclear bombs return to storage at Lakenheath in Suffolk.”

[x] While the private train operating companies (pals of the Tories) made £90m in profits in just six months under their Covid-19 Emergency Measures Agreements, rail workers are being subjected to an open-ended pay freeze – the Government and its private gangsters recouping pandemic losses by cutting staff and other increasingly unsafe measures. See https://www.rmt.org.uk/home/

View all posts by Lawrence →
This entry was posted on 7 May, 2022 in homepage. Bookmark the permalink.