“What do we want? CLIMATE JUSTICE! When do we want it? NOW!”

Posted on 5 October, 2019 by Lawrence Freiesleben 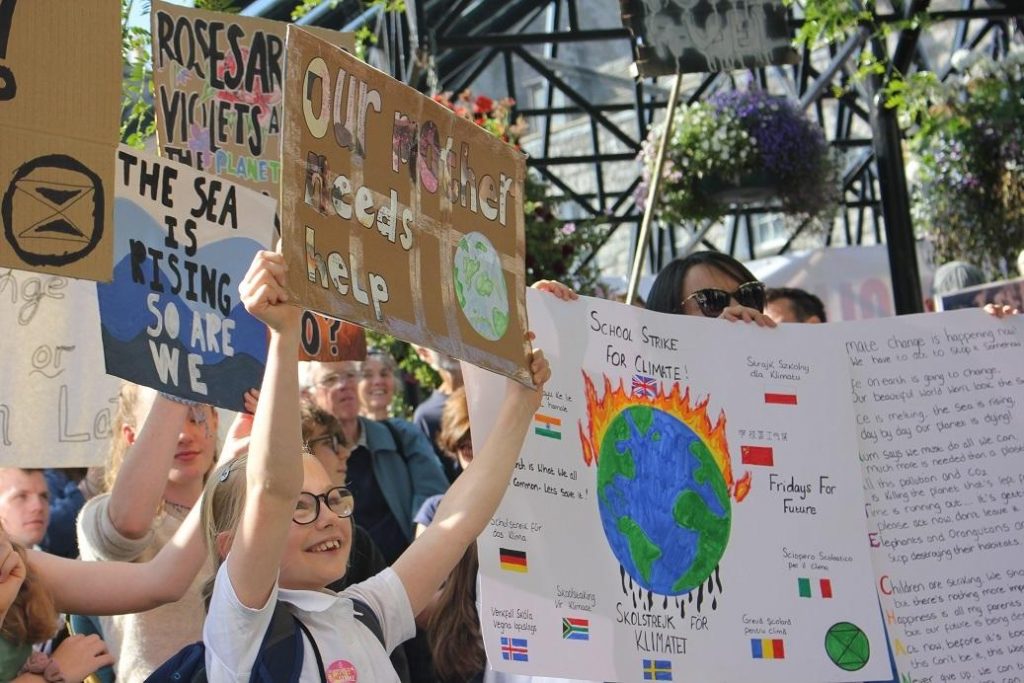 Supported by parents, teachers and older folk, on Friday the 20th September 2019, the global student strikes hit Kendal in greater numbers than most supporters could have hoped for. No doubt this was helped by suspiciously blue skies and a sun as powerful as mid-June. Up at the outdoor bandstand known as the Bird Cage, under its colourful carnival of hanging baskets in the centre of town, Matt Sowerby detailed the aims of the Student Climate Network. Justifiably attacking the faults and hypocrisies of the world, he acknowledged how fear of losing power, disables politicians from advocating the radical course now essential. Though he did not explicitly mention the urgent need for a Citizen’s Assembly[i], or a cross-party government to enforce the emergency system-change required yesterday, the implication was there.

Next, he pointed out all the levels available on which to fight the climate crisis: Everyone can make a difference! In this, he included an entertaining aside about the indomitable older ladies at Preston New Road, Kirkham, knitting against fracking.

Surrounded by the crowd with their striking individual flags, placards and messages, in the beautiful sunlight under the branches of a rowan tree, Jemima Longcake now had the megaphone. Greeting us and the school children in particular, her gaze quested across the enthusiastic heads to discover the identity of the schools present – repeating the names called out, to a chorus of cheering, clapping and whistling. Speakers old and young, town residents and children from a host of local schools, took turns to address the crowd from the wall under the tree, sometimes not holding the megaphone exactly right, but always making their voices and feelings carry anyway. Every speaker brought a new angle to mind, many of them with admirable concision. What a positive atmosphere pervaded from that determined group of mostly young people. One girl in school uniform told how she’d been sitting on the sofa when she first heard about climate change. “I was so scared, I just cried!” she admitted. “But now I’ve seen all the demonstrators, I’m not scared anymore!” she shouted. “NOW, I KNOW WE CAN WIN THIS BATTLE.”

Everyone listening was inspired by her hope and determination. Her resolution and that of so many speakers between the ages of 7 to 19, restored my faith in our rising generations. Until recently, I’d feared that the majority of young people (along with most of us), were lost to the distractions of gadgetry. Now, against all my disillusion – against the feeling that we’ve been here before and few things change for the better – I could really believe that this new generation will reject our religion of materialism to become masters of our double-edged technology, rather than its opium-dulled slaves. Hopefully, they will deploy the good uses of the internet and resist its majority of rubbish. As for the predictably hive-minded fulmination of the Minister for School Standards[ii], that “even one day” of school missed to protest about climate change was too much[iii], how does that square with the government-created situation at the end of last term when over two hundred schools[iv] were having to close early due to lack of staff and resources?

After inciting the crowd into some rousing defiance, Hannah Edwards read out the words of all the wonderful placards and posters made by participants. Then, leaving messages chalked on walls and pavements, we left to march around the town centre and on down to the County Offices, chanting the various demands:

“What do we want? Climate Justice! When do we want it? NOW!” Back in the mid 70’s, several schoolfriends and I tried to get a local branch of the N.U.S.S[v] going in our school. Surface aims included the abolition of school uniform and the banning of corporal punishment – finally outlawed in 1986. But the more important purpose was to try and politicise our sleeping contemporaries, to get them in support of environmental issues and against the injustices inherent in Neoliberalism, injustices still increasing around the world to this day. Though the term Neoliberalism wasn’t in common use back then, our idealistically huge target was the entire weave of capitalism: its crushing, spinning, hypnotic dartboard of random hierarchy; the temptations and avariciousness of materialism, the wastefulness . . . A student by the Bird Cage in Kendal, made a similar point, urging us not to buy anything we didn’t need, “In fact, just don’t buy anything!” he ended – a heartfelt message whose exaggeration did not distract us from his point. 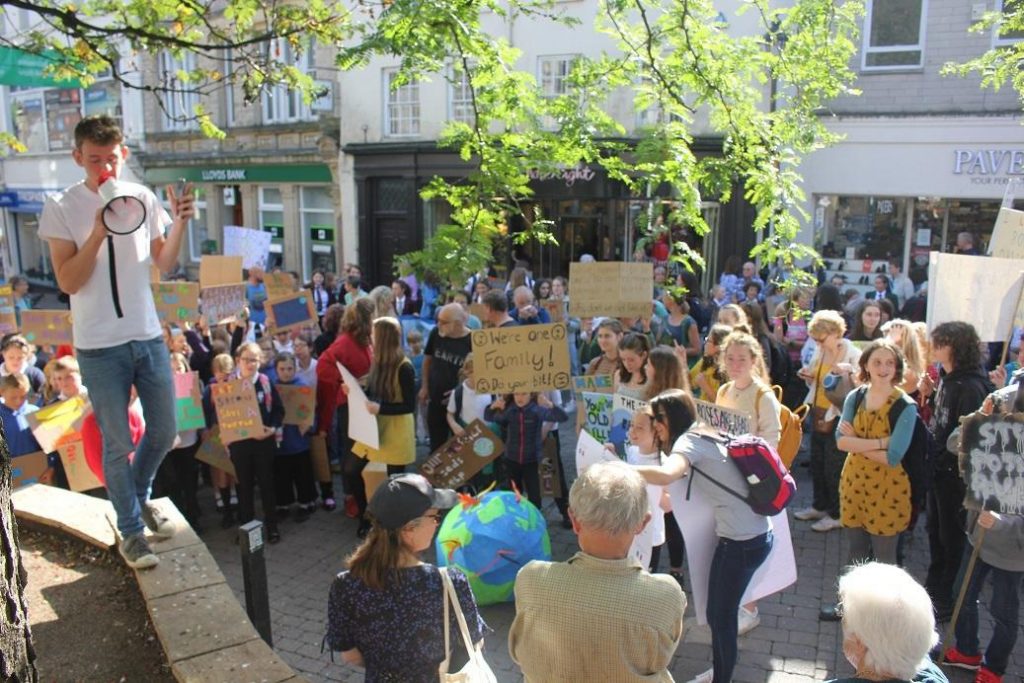 Of course, once the encouragement of a sunny day and like-minded individuals wears off, can we keep our fight for “Climate Justice” escalating when the technology we have little choice but to use, is so infernally connected to the business of constant replacement, to vested interests that want to stay vested unto destruction? Economics is a lie we’ve let rule our lives for too long: we dance to its biased, hypothetical tune. The independent scientist, like the honest politician, the altruistic manufacturer, the practical philosopher and the worthwhile artist . . . are all painfully rare.

As the long column headed for Kendal County Hall, much to the impatience of some participants, it was polite enough to pause for the green man before crossing the road. Many of the smiling drivers tooting in support, looked perfectly willing to stop. Flooding the carpark and the steps of the council offices, after more yells of “Whose future? Our Future!” and “You’ll die of old age; I’ll die of climate change!” everyone died. Reminding the corpses that the dead don’t laugh, Hannah Edwards, requesting five minutes silence, added, “This is serious.” 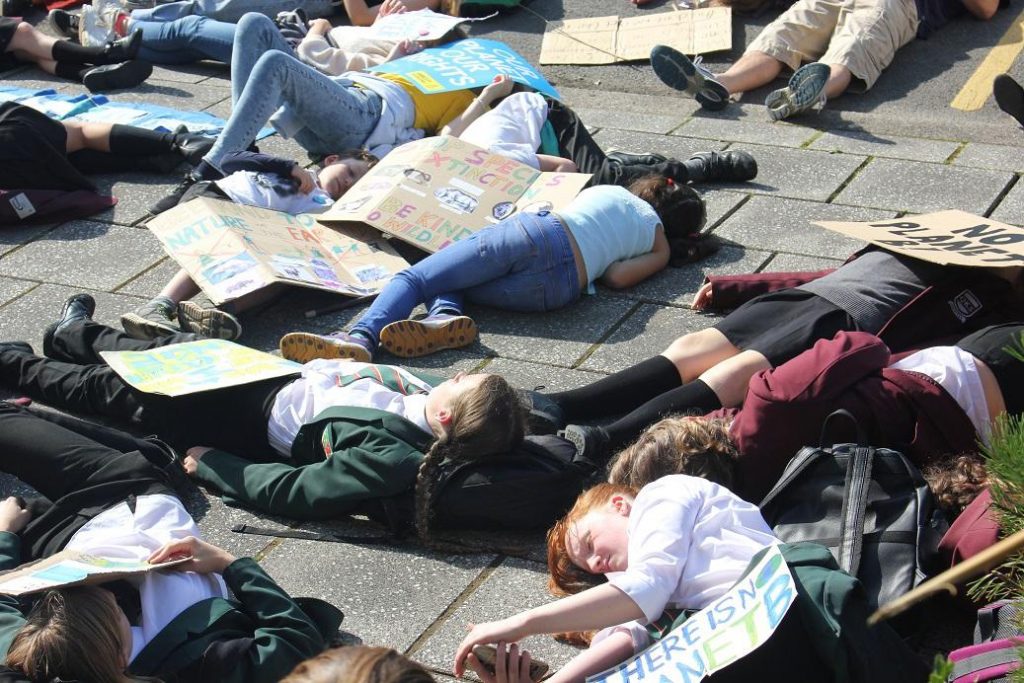 Following resurrection and another spirited march through town, strikers headed for the park I previously knew as Noble’s Rest. Under the alternative name of Maude’s Meadow, this was the venue for a mass picnic, for music and craft events with wonderful vegan food supplied in return for “whatever you can donate” by Nikki and Brian Burrow and Corneel van Maele of the Garden Café and Take Away[vi].

I doubt that any Conservative politicians would have dared show their face, but along with the Green Party, steadily growing in strength in Kendal, Labour were present to distribute leaflets promoting their new environmental policies. Meanwhile, local M.P. Tim Farron, addressed the picnickers with a succinct and supportive message. If only all these groups could unite. Climate Emergency needs a common-sense coalition . . . or am I clutching at plastic straws again?

[i] As clearly demanded by Extinction Rebellion

View all posts by →
This entry was posted on 5 October, 2019 in homepage. Bookmark the permalink.