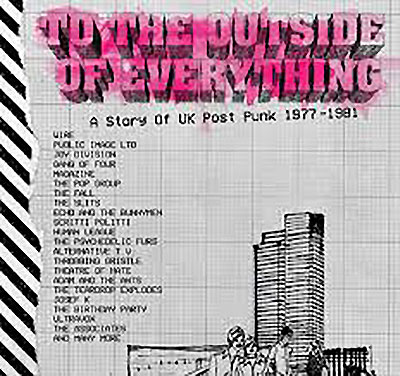 Five CDs of glorious post-punk, punk-funk, indie mayhem., starting with a triple whammy of Ultravox! (when they still had John Foxx and an exclamation mark), Magazine, then Wire, and continuing with a mix of material from bands I’ve never heard of, like ‘O’ Level and The Tights, and classics from Punishment of Luxury, Fischer-Z, pre-mainstream Fashion, The Teardrop Explodes and The Raincoats. What’s not to like? The hits and should-have-been hits just keep coming. Here is punk absorbing dub and funk music, here are the arch and arty Flying Lizards deconstructing ‘Summertime Blues’, here are The Fall in full-blooded roar, here is the early synthpop music of The Normal, Thomas Leer and (heaven forbid! – except it’s quite good) Tubeway Army.

And this exquisite and informative array of musical talent continues throughout the box set, which is accompanied by a groovy and informative 48 page booklet. Here are PiL, Echo & The Bunnymen and Joy Division, names we all know. Here is the indie version of the Thompson Twins before they became the pop abomination everyone loathes and after the huge ramshackle ensemble they started out as. Here are the twee Mo-dettes, the crash’n’burn of The Membranes, the hectoring political funk of The Pop Group, more mainstream indie pop from the likes of the The Fire Engines and Blancmange, as well as a few tracks I never want to hear again (Spider King, The Skodas and New Asia take a bow).

But this is a compilation, right? So there’s always gonna be a cry of ‘wrong choice’ or ‘where are X?’, as well as ‘why on earth did you choose them?’ My wrong choice would include the Eyeless in Gaza track, which is obscure even by Eyeless standards. And I know I’m in a minority, but I wouldn’t bother including New Order on anything – give me The Pet Shop Boys any day; once Joy Division were over, I lost interest. I’m also at a loss why Mass are here instead of Rema-Rema or The Wolfgang Press, since they are both more interesting versions of the same band. But I suspect we’re into issues of licensing, back catalogues, and permissions, not to mention taste.

So leaving that aside, what have we got? Probably the best selection of mainstream and alternative post-punk music now commercially available, and a brilliantly designed and informative set of sleeve notes – in itself, a rare occurrence. Four years of music overview, as punk grinds itself to a halt and absorbs new keyboards and other technologies, and grapples with other musical genres, pop, feminism, politics, artiness and fun. Anarcho-punk would of course continue to thrash three chords and chant slogans, Crass and associated bands would brilliantly explore political themes over unlistenable noise (but wrap it all in provocative and intriguing graphics), and Psychic TV and Nurse with Wound would spawn a hundred occult explorers of collaged and found sound. But post-punk shaped all these influences into songs, vibrant sonic outings you could often dance to as well as nod wisely along with in your bedsit.  This music isn’t outside of everything, it’s the inside, where it all comes together and explodes out into the future. What a story!

View all posts by Rupert →
This entry was posted on 15 November, 2017 in homepage and tagged Rupert Loydell. Bookmark the permalink.