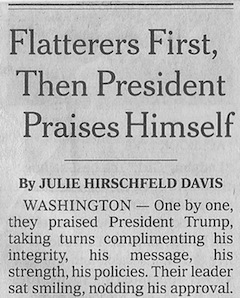 Trump’s first cabinet meeting was the perfect reminder of one of William S. Burroughs’s most satirical “routines.” Burroughs wrote the piece in 1953 and had it published for the first time in a little mimeo magazine called Floating Bear. Since then it’s been reprinted many times, most famously as a mimeographed booklet by Fuck You Press. It begins like this:

Immediately after the Inauguration the President* appeared on the White House balcony dressed in the purple robes of a Roman emperor and, leading a blind toothless lion on a gold chain, hog-called his constituents to come and get their appointments. The constituents rushed up grunting and squealing like the hogs they were.

When John Bryan published the routine in Notes From Underground³, an anarchist journal we did together in San Francisco back in 1969, his introduction explained a few small changes he insisted on making:

In an issue centered around the artist as a revolutionary and critic of the political farce, we thought it would be appropriate to include one of the earliest works of “total assault on the culture” that we know of. “After the Inauguration” was originally called “Roosevelt After Inauguration.” It so perfectly applies to ALL the bullshit presidents since Washington first sold the REAL American Revolution down the river, we took the liberty of substituting the term “the President”* for Burroughs’s original “Roosevelt” and altering the names of the more prominent Roosevelt Era figures so that the reader could more quickly recognize that Burroughs’s satire applies just as well to the present crowd of Purple Assed Baboons in Power . . . 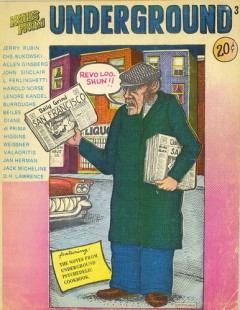 Cover of Notes From Underground [Revo-loo-shun!! by Gary Grimshaw]

In fact, I didn’t want John to take any liberties with the text. Having brought it to his attention, I prissily objected to changing even a hair of it. But John didn’t see the point of publishing it without applying it to Nixon and his gang.Burroughs himself noted in his introduction to the 1979 reprint published by City Lights Books that he thought the routine was “in a sense prophetic of Watergate” but that “few of the Watergate defendants exhibited the degree of pure glittering shamelessness” he had described. “So let us scan the horizons for new frontiers of depravity,” he concluded. “This is the Space Age; we are here to go. We can float out of here on a foam runway of sheer vileness.”

Well, we are already floating and there’s no need to scan the horizon. We merely have to look at Trump, the Twitter Fingers president, and his Banana Republican cabinet of corporate hogs to see the depravity of pure glittering shamelessness. For the edification of readers who’ve never read Burroughs’s prescient satire, here is an excerpt from “After the Inauguration” as it appeared in Notes From Underground³.

An old queen, known to the Brooklyn Police as “Jerk Off Annie,” was named to the Joint Chiefs of Staff, so that the younger staff officers were subject to unspeakable indignities in the lavatories of the Pentagon, to avoid which many set up field latrines in their offices. [. . .]

A veteran panhandler was appointed Secretary of State, and disregarding the dignity of his office, solicited nickels and dimes in the corridors of the State Department.

“Subway Slim” the Lush Worker assumed the office of Undersecretary of State and Chief of Protocol, and occasioned diplomatic rupture with England when the English Ambassador “came up on him” — lush-worker term for a lush waking up when you are going through his pockets — at a banquet in the Swedish Embassy.

Lonny the Pimp became Ambassador at Large and went on tour with 50 “Secretaries” exercising his despicable trade. [. . .]

In short, men who had gone gray and toothless in the faithful service of their country were summarily dismissed in the grossest terms — like “You’re fired you old fuck. Get your piles outa here.” And in many cases [were] thrown bodily out of their offices. Hoodlums and riff raff of the vilest calibre filled the highest offices of the land.

To read the entire routine as it appeared in Notes From Underground³, click here.

Tweet
This entry was posted on 21 June, 2017 in homepage. Bookmark the permalink.

One Response to When Trump Hog Called His Cabinet: Sooie!