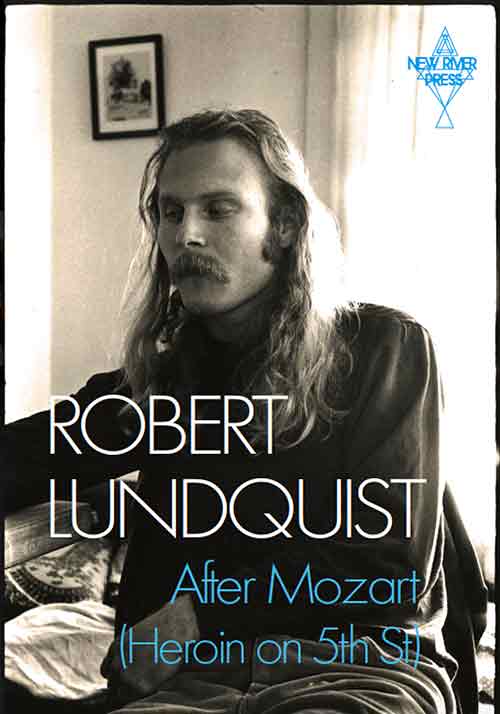 
Free of design, a masterpiece rises from mist. In the case of the exuberantly masterly American Poet, Robert Lundquist, the land cloud is a literal one, comprising and defined by a sustained period of alcoholism, the result of both childhood trauma and to some extent the world and demands of poetry itself. Remarkably, tragically the publication of After Mozart (Heroin on 5th Street) by Robert and Greta Montgomery’s New River Press is Lundquist’s first completed book, the pinnacle of a poetic journey that started in the late 1960’s and which rivers on into the developing now.

Lundquist was an early star, shining brightly over the American literary scene. By the start of the 1970’s and at just twenty years old his trail of light was a crucial element in the literary renaissance built around Santa Cruz, making him that rare thing in modern legend, a true L.A. poet, more than able to rank alongside his antecedents and contemporaries from Gregory Corso and Michael Mclure, to Richard Brautigan, Charles Bukowski and Raymond Carver. By the age of twenty three he was published in the Paris Review, Carver’s Quarry West magazine, and was named by Rolling Stone as one of America’s 100 best poets. This level of achievement for just the first wave of a writer’s work is enough to make this book and Lundquist’s contribution to literature worthy of constant celebration, but it is the subsequent developments that make his struggle and survival all the more crucial to us all.

If written culture (and indeed culture as a whole) is to continue to develop in any conceivable or recognisable way then it must do so in the full understanding that Writing in any form and level cannot and should never be constructed as a pose or approximation of feeling. Imagination can of course access certain areas of experience if the skill of the writer is proven, (Wallace Stevens being a prime example of this in American poetry) but for a truly relatable and lasting worth, the work produced must be informed and in this case saturated with the wisdom of survival and the sadly all too often, the studied poetics of pain. That which stems and reflects a visceral experience of life is that which should be prized at any cost, especially if it is expressed in a combination of beautifully affecting impressionism and reportage. Poetry can amuse and entertain and in doing so convey and allude to meaning and significance but a recognition of truth on a fundamental level that actively scours the soul has a coruscating effect, as in the epic poem A STREET which occurs towards the end of the book, a thirty page summation of submission to tragedy, the scars blood stained and blooming through the cracked pavements of loss; 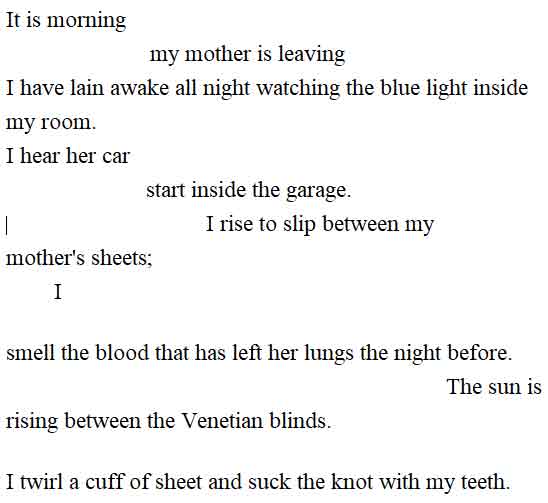 Lundquist’s mother’s sustained battle with TB marked his early age. His father was an undercover cop, tracking and exposing the darker areas of L.A. life, often masquerading as a homeless tramp or bum. The young Robert L. as he said in his introduction at the  launch of this book in the New River Press tent at this year’s Curious arts Festival, grew up surrounded by heroin and the other substances of need and compulsion. That he managed to resist these and the other dangers that his father was engaged in dealing with, succumbing only to the bottle shows how poignancy attains its own hard edged poetic when truth is stronger than fiction.

The episodes centred around A Street Lead the young boy to ‘search for the right tree to touch’ by way of comfort, solidarity and a return, perhaps, to the form of nature epitomised by all mothers; 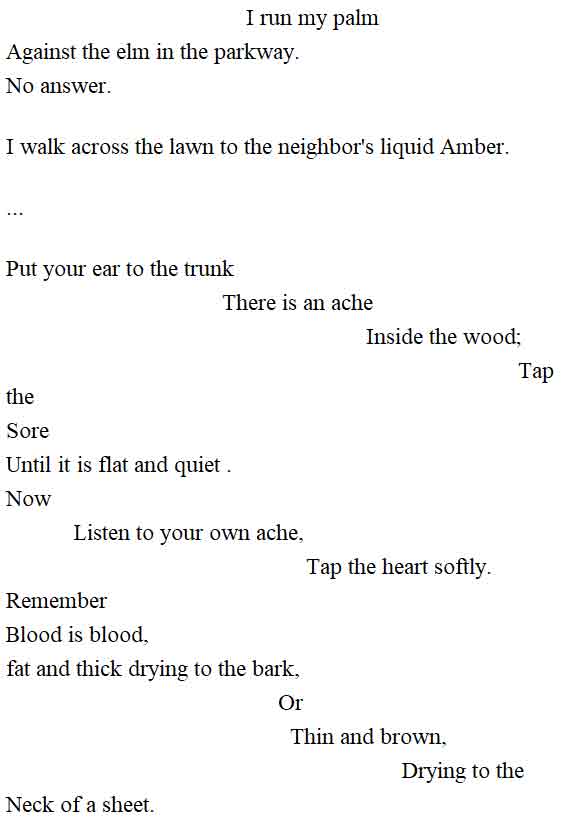 The resonances river through you, returning the reader who was never present right to the place Lundquist walked. This mix of the eye’s reflection and the heart’s music is overwhelming as you encounter each phrase and page of this epic poem and the book that houses it. With its cover portrait of Lundquist by Gerard Malanga and its array of ghosts and reference poetry has been rendered undeniable. There are works that can stand free of any form of subjectivity when they are expressed in such pure terms. Image, consideration, connection, all aspects of humanism and art that unify and validate the artistic impulse and endeavour. That these needed time to settle explains the long periods of inactivity as Lundquist battled addiction and its ensuing affects, showing just how lived this book and the work within it has been. Too often we juggle and rearrange our small frames of reference, fusing them with our own experience. This poet’s approach is more refined. He is able to seamlessly join image and experience, with a dazzling elegance. In the poem BREACH:

There was no easy solution.
Those who would have our death ate well all morning.
Something moved into the brush
And a car followed.

But impressionistic journalism of the mind and heart is not a defining characteristic of the poems included. Written in frenzied and inspired bursts of creativity between 1969-1973, 1980-1985 and 2014 to the present day the pressure cooker of Lundquist’s creativity continues to stun. His poem TITA’S PAIN, written for his beloved wife Nazare, the communion with whom proved a source of salvation and reformation is a perfect example:

Tita’s pain is a sky without wings
birds inside too small to remember
Tita’s pain dissolves the butterflies and the window panes.

His poem THE SOMETHING MORE. A SIMPLE EXPLANATION is a call to everyone from Heidigger to Paul Celan for answers to their and to Lundquist’s quests for renewal, while their title poem opens the book with a majestic fanfare in terms of musicality and inference:

Oh our majesty who condemns us all
This is where the bare trees roam
Their symphony their chorus
Rising above the heroin tents
Whose black tar beds
Lay beneath a tattooed arm.

In short After Mozart. (Heroin on 5th Street) is an act of transcendence and transmogrification. The injection of its poetics, language, emotion, experience and sense of sacrifice is startling, bringing the body into shock and the reader into their own new state of being. The wonderful tag line beneath the NRP’s logo,’ New Writing for Sad Times’ attains special relevance here, separate to its relation to the current state of play in society, culture and politics, as the poet behind, within and above this crucial book has offered his own tragedies do up for a new and constant sources of inspiration. As he states in the poem DORIAN:

From words
unspoken water spreads across her cheeks
onto the lips of each face now missing.
The crease in her throat folds back on the one
sad feeling left
behind. The one sad feeling
tilts her head as if to see tomorrow
and tomorrow always comes.

View all posts by David →
This entry was posted on 25 July, 2018 in homepage and tagged David Erdos. Bookmark the permalink.