Why the Rich Love Burning Man .
[ An update on Fred Turner’s 2009 analysis of the affinity between the owners/managers of Silicon Valley technology firms and an annual fire festival on a dry Pleistocene lakebed in Nevada (http://web.stanford.edu/~fturner/Turner%20Burning%20Man%20at%20Google%20NMS.pdf). IB]
.
.
In principle the annual Burning Man festival sounds a bit like a socialist utopia: bring thousands of people to an empty desert to create an alternative society. Ban money and advertisements and make it a gift economy. Encourage members to bring the necessary ingredients of this new world with them, according to their ability.,
Introduce “radical inclusion,” “radical self-expression,” and “decommodification” as tenets, and designate the alternative society as a free space, where sex and gender boundaries are fluid and meant to be transgressed..
These ideas — the essence of Burning Man — are certainly appealing.
.
Yet capitalists also unironically love Burning Man, and to anyone who has followed the recent history of Burning Man, the idea that it is at all anticapitalist seems absurd: last year, a venture capitalist billionaire threw a $16,500-per-head party at the festival, his camp a hyper-exclusive affair replete with wristbands and models flown in to keep the guests company.
.
Burning Man is earning a reputation as a “ networking event” among Silicon Valley techies, and tech magazines now send reporters to cover it. CEOs like Mark Zuckerberg of Facebook and Larry Page of Alphabet are foaming fans, along with conservative anti-tax icon Grover Norquist and many writers of the libertarian (and Koch-funded) Reasonmagazine. Tesla CEO Elon Musk even went so far as to claim that Burning Man “is Silicon Valley.”
. 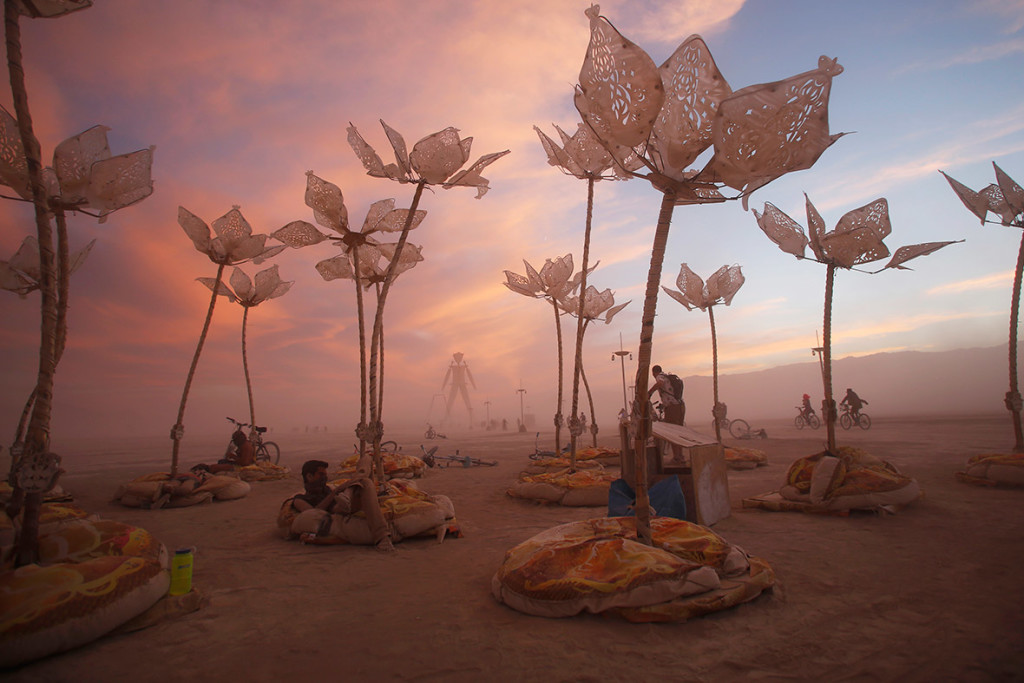 The weeklong Burning Man festival takes place once a year over Labor Day weekend in a remote alkali flat in northwestern Nevada. Two hours north of Reno, the inhospitable Black Rock Desert seems a poor place to create a temporary sixty-thousand-person city — and yet that’s entirely the point. On the desert playa, an alien world is created and then dismantled within the span of a month. The festival culminates with the deliberate burning of a symbolic effigy, the titular “man,” a wooden sculpture around a hundred feet tall..
Burning Man grew from unpretentious origins: a group of artists and hippies came together to burn an effigy at Baker Beach in San Francisco, and in 1990 set out to have the same festival in a place where the cops wouldn’t hassle them about unlicensed pyrotechnics. The search led them to the Black Rock Desert..
Burning Man is very much a descendent of the counterculture San Francisco of yesteryear, and possesses the same sort of libertine, nudity-positive spirit. Some of the early organizers of the festival professed particular admiration for the Situationists, the group of French leftists whose manifestos and graffitied slogans like “Never Work” became icons of the May 1968 upsurge in France..
Though the Situationists were always a bit ideologically opaque, one of their core beliefs was that cities had become oppressive slabs of consumption and labor, and needed to be reimagined as places of play and revolt. Hence, much of their art involved cutting up and reassembling maps, and consuming intoxicants while wandering about in Paris.
.
You can feel traces of the Situationists when walking through Black Rock City, Burning Man’s ephemeral village. Though Black Rock City resembles a city in some sense, with a circular dirt street grid oriented around the “man” sculpture, in another sense it is completely surreal: people walk half-naked in furs and glitter, art cars shaped like ships or dragons pump house music as they purr down the street..
Like a real city, Burning Man has bars, restaurants, clubs, and theaters, but they are all brought by participants because everyone is required to “ bring something”:

The people who attend Burning Man are no mere “attendees,” but rather active participants in every sense of the word: they create the city, the interaction, the art, the performance and ultimately the “experience.” Participation is at the very core of Burning Man.

Participation sounds egalitarian, but it leads to some interesting contradictions. The most elaborate camps and spectacles tend to be brought by the rich because they have the time, the money, or both, to do so. Wealthier attendees often pay laborers to build and plan their own massive (and often exclusive) camps. If you scan San Francisco’s Craigslist in the month of August, you’ll start to see ads for part-time service labor gigs to plump the metaphorical pillows of wealthy Burners..
The rich also hire sherpas to guide them around the festival and wait on them at the camp. Some burners derogatorily refer to these rich person camps as “ turnkey camps.”
.
Silicon Valley’s adoration of Burning Man goes back a long way, and tech workers have always been fans of the festival. But it hasn’t always been the provenance of billionaires — in the early days, it was a free festival with a cluster of pitched tents, weird art, and explosives; but as the years went on, more exclusive, turnkey camps appeared and increased in step with the ticket price — which went from $35 in 1994 to $390 in 2015 (about sixteen times the rate of inflation).
.
Black Rock City has had its own FAA-licensed airport since 2000, and it’s been getting much busier. These days you can even get from San Carlos in Silicon Valley to the festival for $1500. In 2012, Mark Zuckerberg flew into Burning Man on a private helicopter, staying for just one day, to eat and serve artisanal grilled cheese sandwiches. From the New York Times:

“We used to have R.V.s and precooked meals,” said a man who attends Burning Man with a group of Silicon Valley entrepreneurs. (He asked not to be named so as not to jeopardize those relationships.) “Now, we have the craziest chefs in the world and people who build yurts for us that have beds and air-conditioning.” He added with a sense of amazement, “Yes, air-conditioning in the middle of the desert!”

“Radical self-expression arises from the unique gifts of the individual. No one other than the individual or a collaborating group can determine its content. It is offered as a gift to others. In this spirit, the giver should respect the rights and liberties of the recipient.”

The root of Burning Man’s degeneration may lie in the concept itself. Indeed, the idea of radical self-expression is, at least under the constraints of capitalism, a right-wing, Randian ideal, and could easily be the core motto of any of the large social media companies in Silicon Valley, who profit from people investing unpaid labor into cultivating their digital representations..
It is in their interest that we are as self-interested as possible, since the more we obsess over our digital identity, the more personal information of ours they can mine and sell. Little wonder that the founders of these companies have found their home on the playa..
It doesn’t seem like Burning Man can ever be salvaged, or taken back from the rich power-brokers who’ve come to adore it and now populate its board of directors. It became a festival that rich libertarians love because it never had a radical critique at its core; and, without any semblance of democracy, it could easily be controlled by those with influence, power, and wealth..
Burning Man will be remembered more as the model for Google CEO Larry Page’s dream of a libertarian state, than as the revolutionary Situationist space that it could have been.
.
As such, it is a cautionary tale for radicals and utopianists. When “freedom” and “inclusion” are disconnected from democracy, they often lead to elitism and reinforcement of the status quo.
‘
Keith Spencer
.
. 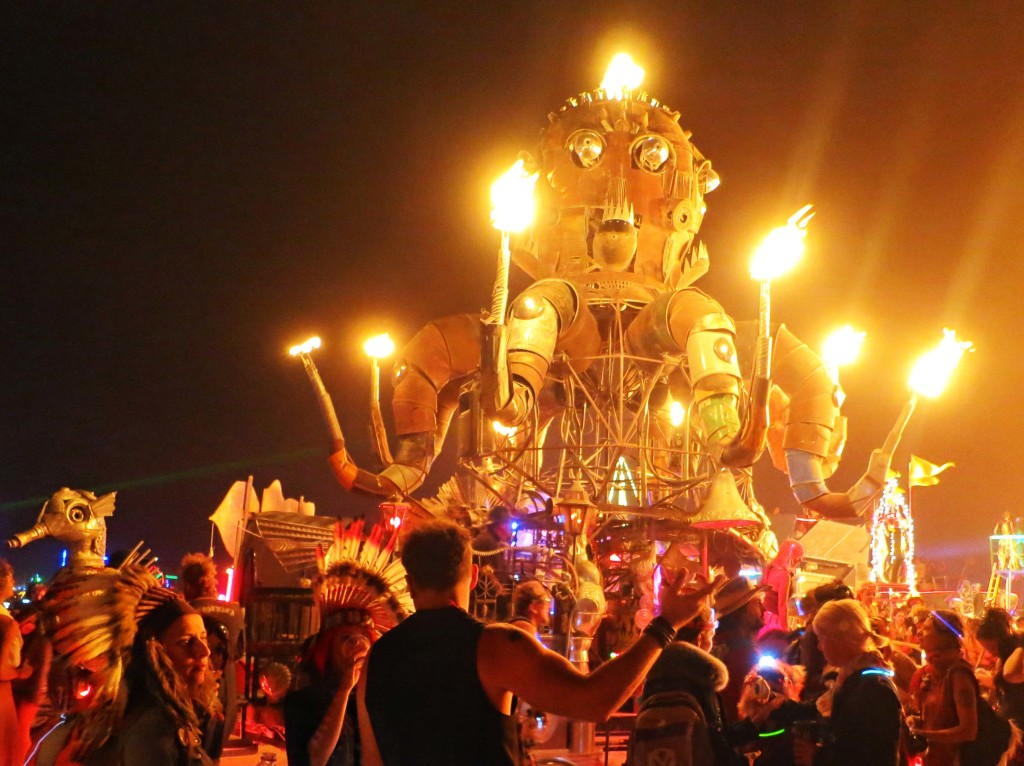 2 Responses to Why the Rich Love Burning Man