Posted on 3 November, 2016 by Ethan Harrison 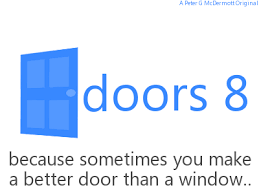 Timothy Tremor Confudit, inventor of Windows 8 and one of the world’s most wanted ‘Techno Terrorists’, was finally tracked down yesterday at his LA ranch and killed by a hoard of angry computer users. Mr Confudit became a household name shortly after Windows 8 was launched on an unsuspecting public back in 2012 and within weeks the infuriating software had been responsible for millions of deaths worldwide, mainly from frustration and brain hemorrhages. It is suspected that the bloodthirsty gang would have found Mr Confudit sooner had they not experienced a raft of software problems when searching the internet for details of the designers whereabouts.

Steve Gatt, attorney at law representing Mr Confudit’s estate, commented on the death of his client, “Let’s face it. He had it coming. Don’t get me wrong, Tim was a nice guy and everything. One of the best. I even had dinner with him and his wife and kids last week but you have to admit it, after using Windows 8 for ten minutes and being asked if you want to make a video of yourself and share it with your friends for the millionth time because you moved the cursor within six feet of the edge of the screen, you would have wanted to shoot him in the face just like everyone else.”

Fellow LA resident mild-mannered sixties folk icon Paul Simon who wrote the hits ‘Scarborough Fair’ and ‘Homeward Bound’ was one of the thousand strong gang who broke into Mr Confudit’s house and is reported to have been heard shouting from the front of the murderous frenzy, “All I wanted to do was scroll! Scroll you bastard! But the screen kept going big – small, big – small, big – small. Big – Small! I’ll make you big and small you son of a bitch! Die! Die! Die!”

Mr Confudit’s passing could not have been more expedient as he had recently been offered a job at Ford redesigning the company’s entire new range of cars and it is estimated that his ‘un-intuitive methodology’ would have led to the deaths of up to a million drivers per day after they accidentally brushed their indicator stalks causing their new digital windscreen readouts to suddenly shrink so small they can only be read by an aphid with a microscope.

View all posts by Ethan →
This entry was posted on 3 November, 2016 in homepage and tagged current affairs, Ethan Harrison, politics, satire, Social commentary. Bookmark the permalink.