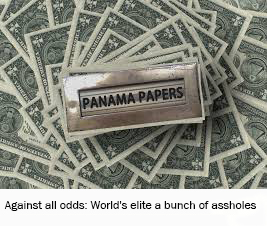 Record levels of shock and horror have been reported after the latest large-scale info leak ‘The Panama Papers’ revealed that, against all odds, the World’s elite are, in fact, a bunch of assholes.

The Guardian’s top political specialist Simon Shitfore Brains gagged, ‘I’m horrified! I managed to overlook; Operation Northwoods, Watergate, Irangate, Wiki Leaks, Blair’s dossier tweaks, The Hutton, Chilcot, Diana inquiries, Warren, 9/11 commissions, 7/7 omissions, Iran’s Contra, Super Gun, and nuclear affairs, Libor, phone-hacking, Mandelsson scandals, Westminster, Royal and BBC peadophilia, cash for questions,influence, peerages and honours and everything else that any normal person can just google in two fucking seconds but gosh these new documents really do take the Michael. I mean, (although we never say it), everyone knows that any one of the world’s elite could have you blown up for as much as looking at them, especially if you had any oil, or money, or anything else of any value but that they’re all fiddling their tax as well; OMG! I can’t believe it!’

Sally Slopswell from Chigwell, New Labour fundraiser and busy rep for House of Fraser, wailed, ‘I’m so utterly and overwhelmingly shocked that I could explode! To discover that Iceland’s Prime Minister is actually a dodgy bastard who’s on the take has broken my heart. I used to believe in the scruples of mega rich business men and their slimy friends in the political class but now I’m devastated. What’s the point in going on?’

Billy ‘Buttons’ Barton, a pantomime therapist from Dunbarton gasped, ‘I’m so stupid I actually believe the news on television so, as you can imagine, I’m as shocked and horrified as the other people in your article. I work in the arts so I have an incredible imagination but even I couldn’t have imagined that people with immense wealth and power try to get more by lying? Holy bollocks!’

Simon Sideswipe D’Serpent, BBC’s chief financial and moral correspondent, laughed, ‘Au contraire. In a lot of cases these wild claims that the world’s elite are a bunch of lying kleptocrats are merely conspiracy theories dreamt up by poor people. If David Cameron, or Davey Wavey Stick-It-In-My-Cavey as I used to call him at school, says that he didn’t know he had millions invested in a dodgy offshore account set up by his father, from whom he inherited a fortune and an enormous house with a large garden and swimming pool, then that’s good enough for me.’

Panama Papers: Why should we care? – Al Jazeera English

10 hours ago – The Panama Papers leak shows that it is not just the global tax system that is … tax avoidance, and criminal activity should surprise no one.

The Panama Papers is a global investigation into the sprawling, … no surprise, rapist Bill Clinton and rape …

View all posts by Ethan →
This entry was posted on 7 April, 2016 in homepage and tagged current affairs, Ethan Harrison, politics, satire, Social commentary. Bookmark the permalink.