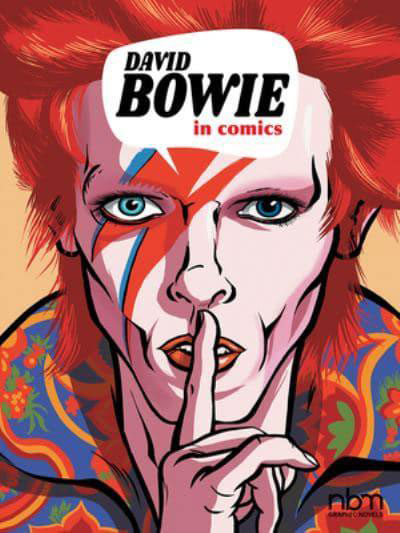 A biography in twenty chapters, each featuring a different comic artist, each prefaced with a brief and informative contextual page or two of writing accompanied by photos. The book quickly moves from ‘The Plastic Saxophone’ of 1950s David Jones through his early bands to the moment ‘When David Jones Becomes David Bowie’ and then Major Tom lifting off with his hit single ‘Space Oddity’.

We are introduced to Angie, relive Bowie’s casual embrace with Mick Ronson on Top of the Pops, and then watch as Ziggy Stardust conquers the world, becomes Aladdin Sane, gives his friends Lou Reed and Iggy Pop a musical boost, tries to write a musical based on 1984 and goes to the (Diamond) dogs. Then Bowie jumps on the soul train, becoming a young American who wastes away into the Thin White Duke. In Berlin he makes the most radical albums of his life before turning to pop and dance.

A film career and Tin Machine are in the mixture, as is Iman, drum’n’bass and the 21st Century silence before the final comeback, where Bowie lays the ghosts of Ziggy, Aladdin, Major Tom, Pierrot and all the others to rest before embracing New York jazz to surprise us all one last time with The Next Day, the play Lazarus and then Blackstar and a final disappearance into death’s dark wardrobe.

You know how it goes, everybody knows how it goes. Everybody has a different favourite Bowie album, but everyone has a favourite Bowie album or a Bowie album in their favourites. What you haven’t seen before are these stunning comic strips in all their colourful glory. Bowie’s chameleon presence and personalities are well suited to this kind of graphic depiction, and each and every artist seems perfectly picked for the chapter or story given to them.

There’s a seemingly simplistic start, with childlike wonder; bold colours for Top of the Pops; and nods to many of Bowie’s music videos throughout the book. Berlin is a ghostly shade of grey-green, Iman is sexy as hell, New York its dirty self, and the final chapter is mysterious, illuminating and low-key. This is David Bowie re-invented again, re-drawn and revered. It’s a marvellous, kaleidoscopic biography and if you like Bowie or comics you should buy it.

View all posts by Rupert →
This entry was posted on 20 August, 2022 in homepage and tagged Rupert Loydell, Wowie Zowie!. Bookmark the permalink.