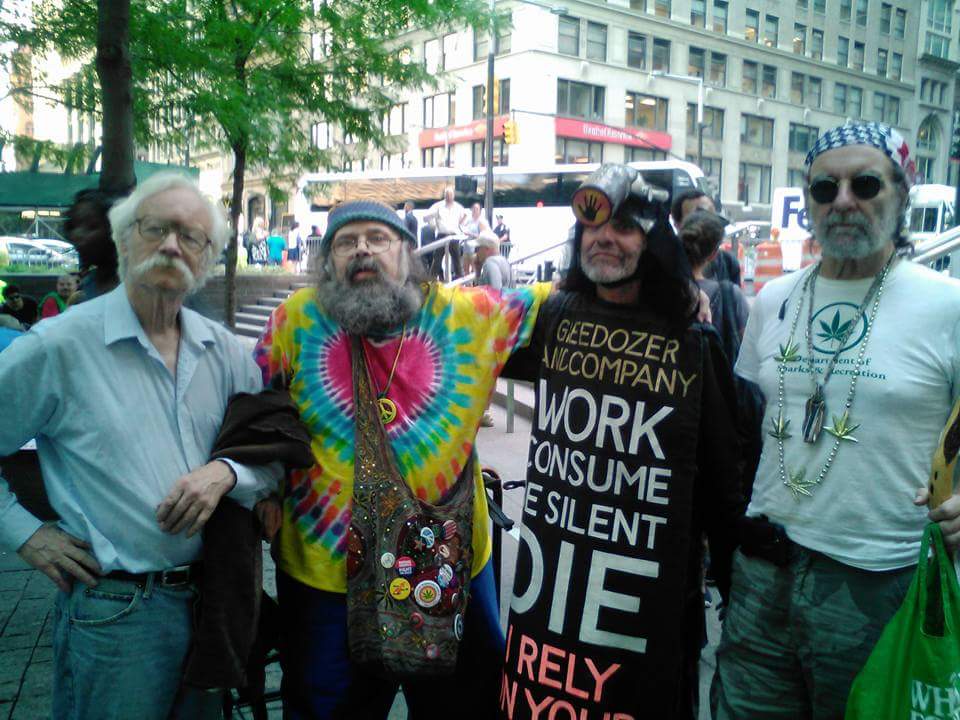 Saira Viola talks  pies, politics and  pot with the original ‘Pie Man,’ a beloved and mischievous figure from the American counter culture era of the 60s and 70s, who continues to exert his unflinching exuberance influence, and passion for the evolving activist movements today.

S.V. Who or what inspired you to become chief pie thrower?

A.K. I happen to be a Vietnam war child and a child of the holocausts my mother was a graduate of Auschwitz and Bergen Belsen, my father hid from the Nazis in a polish forest for three years so I was very aware of  political situations. I grew up watching Abbot & Costello, and Marx brothers movies, you know, The Three Stooges and my heritage, my Jewish sense of humour is part of my survival. It’s in me, that kind of warped sense of fun. I actually witnessed Tom Forcade pie a member of the President’s Commission of Obscenity and Pornography in 1970  and that was the moment, and it all just followed on from that.

S.V. Have you always been involved with the underground movement and counter culture politics?

A.K. Yes, I explained my background, you know where I’m from and my parents, and back in the 60s I was living in LA and I was part of the Griffin Park Love Ins we gave away free food to the community, I was always a rebel. Even when I was a kid I used to drive my parents crazy like the time I got back from a Grateful Dead concert tripping on acid and snuck  a young lady into my room. Later on I became very focused on radical politics and believe you have to protest you have to challenge what’s unjust with society. I protested the Vietnam war,  went to all the black panther rallies and witnessed the protest at the courthouse  in favour of Bobby Seal (Former Black Panther), campaigned for the legalisation of marijuana with other activists and was  part of a wave of underground radicals that really made a difference.

And I’m not done yet, as a cancer survivor, I have a fresh cause to fight for, I believe that health care is an inalienable  human right for everybody. And there should be a constitutional amendment on it, quality healthcare is a right everyone should be entitled to. As someone who has suffered on the frontline with cancer enduring endless rounds of chemo, having my beard and hair fall out we need a mass amnesty on marijuana, I was lucky I had pot edibles to get me through my cancer treatment, but others aren’t so lucky. We need to de-schedule it so everyone can benefit from treatment. And not give in to corporactocracy.

S.V. Turning back to pie days – who was the very first person you pied?

A.K. I  popped my pie cherry by attempting to pie Rennie Davis  who was a defendant in the case of the Chicago 8…Rennie had sold out to the fifteen year old “perfect master” guru maharaj ji….the pie was thrown during his rally at the Anderson Theater in NYC. 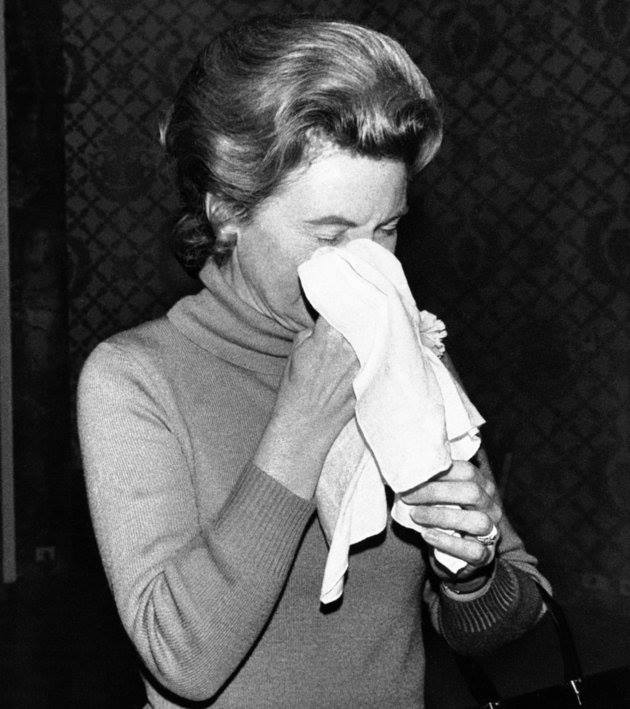 A.K. I believe Warhol had dinner with the Shah of Iran who was a bloodthirsty dictator. It pissed me off.

Andy Warhol gets a cherry pie at a High Times bash

S.V. What do you think the pie achieves that other protests lack?

A.K. Well it brings a sense of humour into the political debate and as a political statement it creates immediate impact, deflates the victim’s ego and humanises them in a way. Some people take it really badly and are offended, others just laugh it off, but it creates an impact.

S.V. Why do you think pie throwing is becoming an increasingly rare form of political  protest?

A.K. The short answer to that is people are too candy assed  to take a risk. It creates legal problems for people and people nowadays don’t want to take that risk. You could end up behind bars, in some places it’s deemed assault and you could get a stiff fine or jail time.

S.V. Who would you most like to pie now?

A.K.Trump? He needs a female to pie him, he’d feel castrated then.

S.V.Is there anyone you wouldn’t pie?

A.K.There is a pieman etiquette I adhere to. I would never pie anyone disabled, or in a wheelchair, anyone hurt or blind. There’s ethics involved.

S.V. And finally, as someone who’s lived it, been there and done it do you think the alternative culture of the underground has been successful?

A.K. I’m positive we made changes, but there’s still so much more we have to do and can do. Fifty years have passed since the era of the Summer of Love began …it ain’t over till it’s over!!!

See it fly toward ex-Mayor Beame of NYC 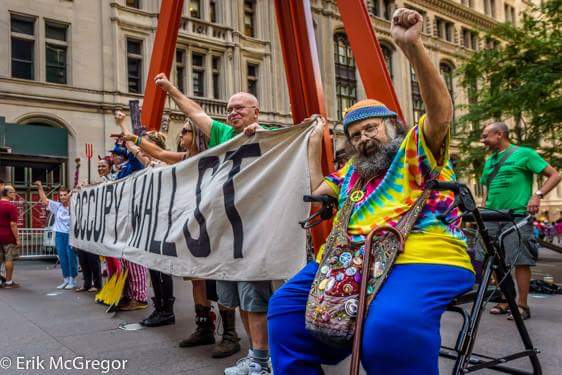 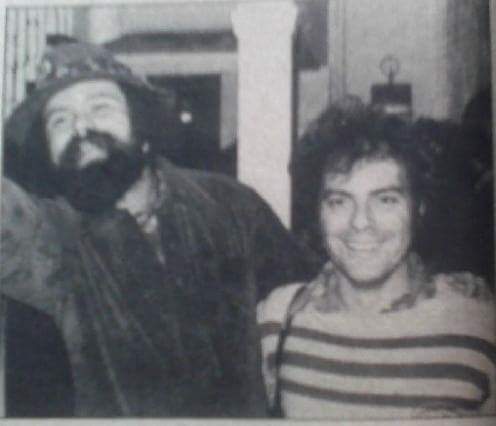 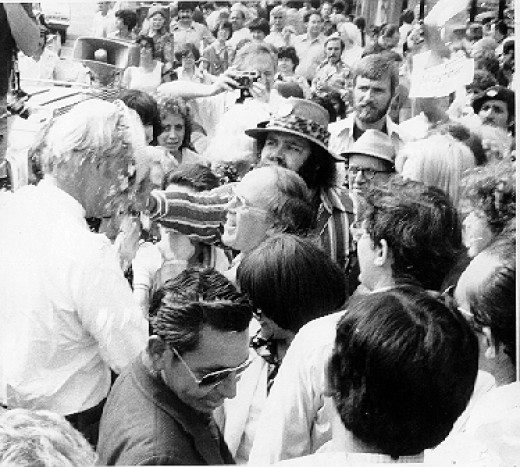 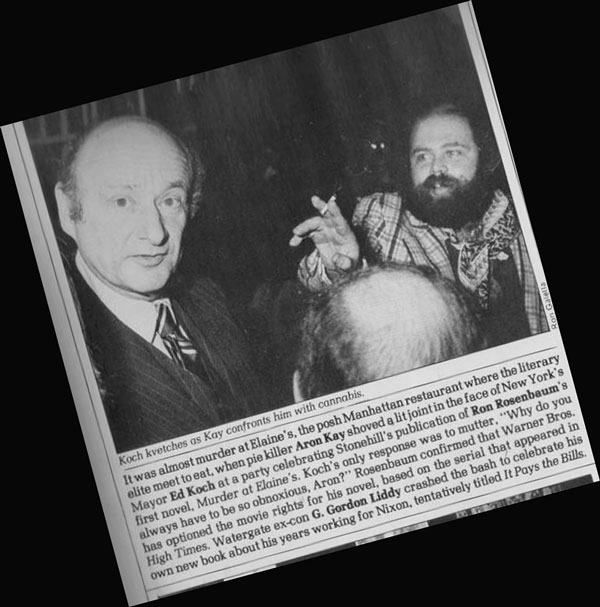 Pieman Aron Kay Gets Ed Koch out of Joint

View all posts by Saira →
This entry was posted on 15 September, 2016 in homepage and tagged Aron KAy, Saira Viola. Bookmark the permalink.