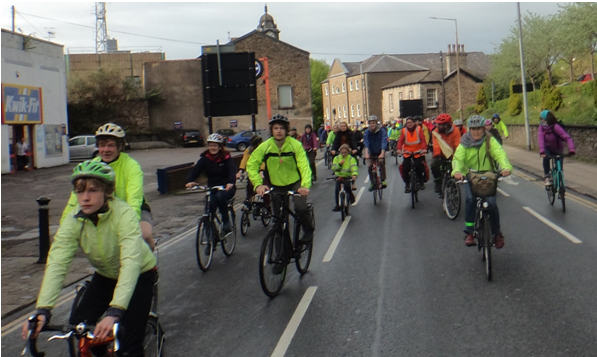 At this point the Mass is not yet Critical. So far, all anyone might notice is a few eccentric cyclists and standers-about. For the present, sitting on the bench opposite a slight knot of people, knowing the plan and anxious to eat something long delayed from lunch, it’s inspiring to watch the numbers build.

Since getting off the train, exploring a city only partly familiar, I’d been hoping to find a good place to sit and reflect. Cycling south along the canal in rain showers of varying intensity – astonished at how fast the city fades into countryside in the Aldcliffe direction – the ideal place had evaded me. Now the weather is only overcast. In fact, the sky seems to be lightening for us.

By 17.45 a swelling crowd occupied much of the area around Queen Victoria’s Memorial and I don’t think that long-reigning monarch would have been amused – either by us or by where Empire inevitably leads.

It was time for me to change from observer to participant. Ditching a warm jacket (excellent North Shields charity purchase from some years back) for the home-sloganized, Extinction Rebellion T Shirt, I joined the friendly throng and soon spotted a fellow member of the South Lakes XR Group, Liz Boothman.

Two other younger members, Bella Matarewicz and her sister Rosa, soon arrived to increase the enthusiastic assembly. Undaunted by being refused space for their bikes at Oxenholme railway station, they had come to join the equally important walking group, planning to march through the City’s pedestrianised areas. Meanwhile the cyclists would be orbiting the encircling one-way system as slowly as possible. 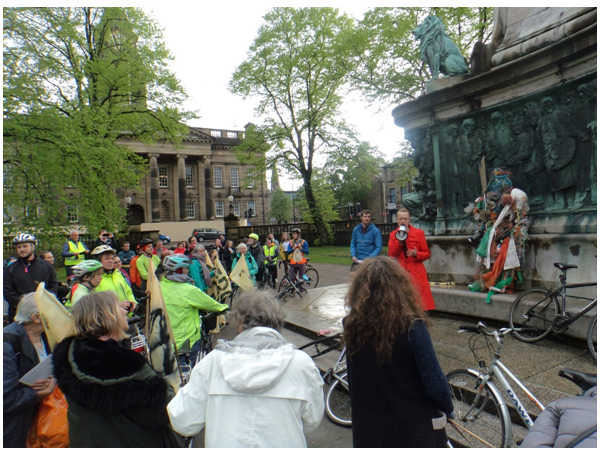 Organised by members of Morecambe and Lancaster XR groups in conjunction with the cyclist’s rights group Critical Mass[i], banners placards and signs were handed around – along with safety pins to attach them. After a general welcome, instructions about the routes, and a rousing send-off by Labour M.P. for Fleetwood and Lancaster, Cat Smith (above) we were all ready. A call went out for any cyclists confident about breaking into the traffic to take the lead. 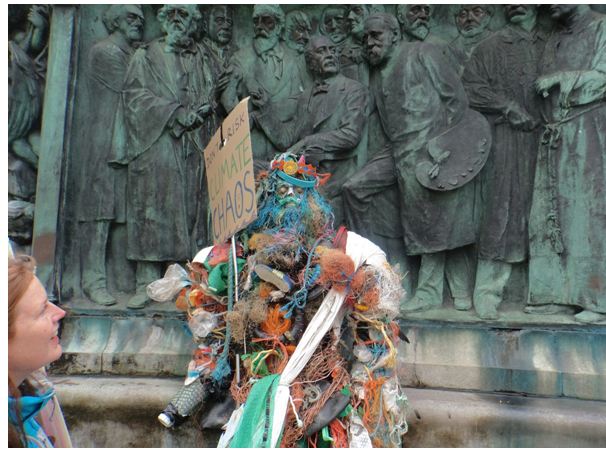 Unfortunately, the despairing Neptune (above) appropriately flanked on the corners of the monument[ii], by Truth to his right and Freedom to his left, had to stay behind to hold the fort. I don’t know if that’s who he really was, I never got a chance to ask. He could have been a wiser Canute, urging us to heed his lesson; warning us of the rising seas and melting ice[iii]. The 2016 collapse of a shelf of ice in Antarctica, which drowned thousands of emperor penguin chicks, is now thought to have effectively wiped out their second largest breeding colony[iv]. Neptune – the Roman name appeared to suit him best – obviously remains in mourning.

Nero is another Roman celebrity who springs to mind with reference to governments around the globe – and judging by the recent talks Michael Gove had with Extinction Rebellion activists[v], the environment secretary still appears lost in his fiddling. Backed by various Victorian worthies – Ruskin, Millais, Turner and Tennyson among them – at least the god of the sea had more solid advisors. In our temporary absence, hopefully some of them leaned down to tender him encouragement. George Frederic Watts[vi] (holding the palette in the photo above), looks particularly concerned to offer consolation. Or is he cautiously marvelling at such a gift of a subject? The trouble is, all his paints have turned to bronze.

Halting the traffic and setting off, our clamouring company of cyclists were of all ages, from children to pensioners. A dedicated and enterprising boy of about thirteen scooted along and amongst us, zipping left and right to put flyers under the wipers of parked cars. Interested bystanders, and drinkers in wayside pubs, perhaps amused by our ragged procession, were keen to take leaflets, happy to investigate what we were about. What heartened me most about our repeated circumnavigation of the city’s centre was the amount of encouragement and support we received – even from drivers being held up. The fact of climate emergency is obviously getting through to everybody – with now the media joining in: “Climate Protestors are telling us the deadly Truth”[vii] ran the Financial Times last month. Only the government is still dragging its feet.

At points on our orbit there were several prolonged horn blasts which were not so friendly. These were soon counter-blasted by children and other riders with whistles and bicycle bells, as well as cyclists carrying those audible music devices on their bike racks . . . Sadly, it turns out (as anyone reading this probably knows) that these are just called ‘portable speakers’. I may be Luddite in my attitude to technology, but I still prefer gadgets to have an imaginative or catchy name. 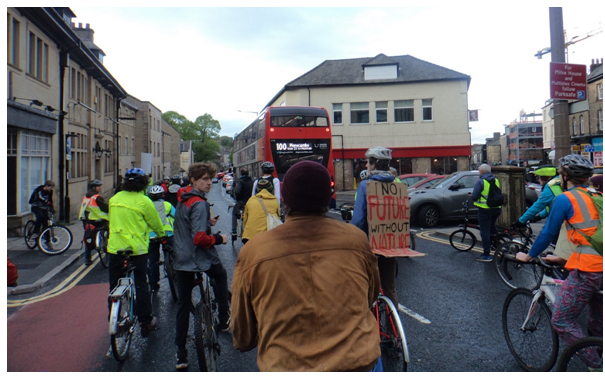 None of my photos – many taken optimistically over my shoulder whilst cycling, turned out to be quite what I wanted. The images of a cheap camera are a poor substitute for memory and a sense of connection, but they serve well enough as record.

Dating back even to before my involvement with CND in the early 1980’s, I have long had a recurring dream about cloaked protestors on bicycles. The Climate Emergency behind this consciousness-raising demonstration may be just as dark as the threat of Thermonuclear War, but the event itself defied the black sense of despair or inevitability which the dream has always given – its sense of prophetic unease. This Critical Mass/XR event was contrastingly uplifting – and for a while on the southern section of our gyratory, the sun even briefly glimmered.

STOP PRESS: Despite last night’s very welcome news that thanks to pressure from Labour leader Jeremy Corbyn – inspired no doubt by Extinction Rebellion, Greenpeace, David Attenborough, Greta Thunberg, petition organisations and other activists up and down the country – the U.K. government has declared a climate emergency, it remains to be seen if enough ACTION will be taken. With public support clearly increasing, Implementing Greenpeace’s 10-point plan would be a good start:

(1) Ban all new oil and gas production in the UK, including fracking
(2) Triple renewable energy by 2030
(3) Plant 700 million trees
(4) Introduce a Frequent Flyer Tax
(5) End the sale of all new petrol and diesel cars by 2030
(6) Roll out free bus travel for young people and those on lower incomes
(7) End carbon emissions from heavy industry like steel and cement
(8) Create millions of jobs in a new green economy
(9) Retrofit our homes to go zero carbon
(10) Radically change the farming and food system to encourage a less meat-based diet

Despite numerous one-person exhibitions of paintings [1] since leaving home and school at 16, Lawrence Freiesleben has always remained thankfully/frustratedly in the shadows. Being out of step and out of time has long been his speciality. His first ‘novel’ The Bow [2] was unfathomable, his second, Maze End, spent much of its time in Paradise, and his third, Certainty Under the Rose, was set in the early 1980’s (!) The fourth, Estuary and Shadow, is still in limbo while he Digresses in the International Times [3], writes short stories [4] and poetry and struggles to reach 100 rejections a year, (most agents and publishers don’t even bother to reply, so 100 dispatched queries is easy by comparison).

A long-time member of Greenpeace and Friends of the Earth, he is hoping that with the rising up of Extinction Rebellion all these groups (and others) can cooperate and finally force a change in the careless way we live.

Tweet
Tweet
This entry was posted on 4 May, 2019 in homepage and tagged Extinction Rebellion, Lawrence Freiesleben. Bookmark the permalink.