A Face Out of The Crowd 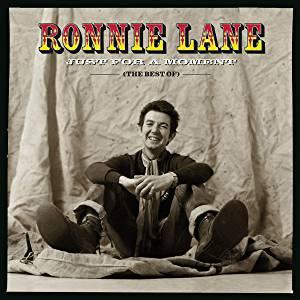 Just for a Moment (The Best Of), Ronnie Lane

Ronnie Lane’s career in rock falls handily into three acts, which is two more than many. In the first, as half of a songwriting partnership with Steve Marriott, he wrote hits like ‘Tin Soldier’ and ‘Itchycoo Park’ for The Small Faces in the late 1960s. Paul Weller is on record as stating that they seemed the perfect band, but when Marriott walked away, Ronnie’s second act began when he recruited Ron Wood (and a fairly unknown singer called Rod Stewart) and started again as The Faces, beloved rockers, drinking and gigging their way through the early 1970s. They, too, had hit singles like ‘Stay with Me’ and ‘Cindy Incidentally’, but in 1973, Lane left them, too, disenchanted, and now came the third act of his career, his adventures with Slim Chance, summarised on this compilation and the parent 6-CD box.

Slim Chance, named jokily after their odds on being a success, were not like either of these first two bands: out went sharp, punchy mod tunes and beery, anthemic songs of seduction respectively; in came rural, bucolic reflection and original songs entitled ‘Harvest Home’ and ‘The Poacher’. Out went guitar solos, in came mandolin and accordion, and in place of huge coast-to-coast American tours, Lane’s ‘Touring Show’ attempted to travel and play from town to town like a freewheeling circus of travelling gypsies. Lane himself had relocated to Fishpool, his farm on the Welsh border, and many of his new songs reflected this and were recorded al fresco, complete with the sounds of birdsong and crickets.

After an initial impact with ‘How Come’, which reached No. 11 in 1974 came the glorious follow-up ‘The Poacher’, complete with shimmering strings and woodwind, hymning the beauty of a simpler life, away from the temptations of money and the excessive rock-n’roll lifestyle he had experienced. The song stalled outside the top thirty and thereafter it was diminishing returns in terms of sales through the 1970s. Artistically, however, Lane was on a roll and wrote a sequence of beautiful, lilting, melodic songs, inventing the idea of the ‘raggle-taggle’ gypsy band, inspired by the sort of rural authenticity he now embraced.

These songs are instantly recognisable, the sort that makes listeners of a certain vintage sigh knowingly: his voice is characterful rather then technically perfect, inhabiting the melancholic, uplifting lyrics effortlessly. Foolish financial choices meant that old bandmates had to bail him out when he was diagnosed with the Multiple Sclerosis that would eventually kill him in 1997, aged 51. It reputedly took decades for the surviving Small Faces to track down their considerable royalties. Yet none of this matters: what matters is the indelible music he left behind. This single-disc compilation follows the 2014 release of Ooh La La: An Island Harvest, and both help re-establish his catalogue following a time of obscurity, when the original albums have been very difficult to obtain. It will certainly introduce many to his work and go some way to explaining why Weller and Pete Townsend, all these years later,  continue to fondly name-check him.

As an overview of the Slim Chance years, this is a welcome 18-track sampler. It finds room for most of his singles plus his cover of ‘Brother, Can You Spare a Dime?’, but first-rate Lane songs such as ‘Done This One Before’ (the great B-side to ‘How Come’) and rockers like ‘Don’t Try and Change My Mind’ are nowhere to be seen. On the other hand, there is the welcome inclusion here of three tracks from the difficult-to-find first Slim Chance album, Anymore for Anymore. Nevertheless,  some of the other selections are questionable: why include late demos, rather than the key songs ‘Debris’ and ‘Ooh La La’, for instance? Although they date back to his days with The Faces, these both remained in his set for years, the former being a beautiful song about his parents and childhood. The Island collection referred to above included eight tracks from a 1974 BBC ‘In Concert’ performance that demonstrated what a great live band the original Slim Chance were, and may perhaps be a better place to start. Having said this, if you want to dip your toe in and find out why so many revere the songwriting talent of Ronnie Lane, this will serve as a good introduction.

Tweet
This entry was posted on 19 October, 2019 in homepage and tagged M.C.Casely, Martin Caseley, Ronnie Lane. Bookmark the permalink.

One Response to A Face Out of The Crowd