A SHORT HISTORY OF ROCK’N’ROLL 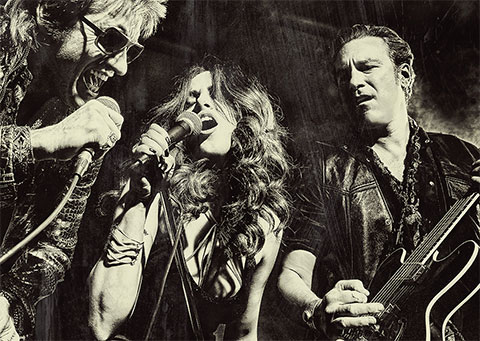 Rock Around the Clock
I was fifteen when the movie was released –
my Dad’s Express headlining tales
of fights in cinemas, ‘Teds’ with their razors
slashing seats.   When it showed at the Rialto
I had my mother pleading with me not to go.
Dark foggy night, bus coming out the gloom;
the worst she need have feared – my seeing
Little Richard in full Tutti-Frutti on the screen.

Great Balls of Fire
I sent off for a ticket to hear Jerry Lee
at the Essoldo, Slough – knowing from kids
who lived that way, the Dollies
had a reputation.   That was the tour, however,
when they stopped him at the airport
trying to bring his bride of just thirteen.
Disgust in all the papers.  I only felt
the loss of everything that might have been.

Putting On The Style
Our skiffle group took four months mastering
a single song. Playing the youth club party,
we could only keep reprising Donegan
for encores.  Eventually, we worked up
repertoire, playing a couple of gigs;
always had better electricians than musicians.
Centrifugal forces soon set in – whether
to play Bert Weedon or sing Elvis –
all swallowed up with drinking, studies, girls.

Livin’ Doll
Went to hear Cliff in Manchester –
big cinema, packed with pubescent girls.
The screaming came before the opening bar,
and never stopped.   Could scarcely hear a note.
Gave up pop concerts from then on.
Love Me Do
Freedoms of early sixty-three –
hard winter but warm beds,
doormat department in the Sales
all-day music piped through the store.
Yet another new group –
catchy number, neat enough name –
maybe we’ll be hearing more.

Not Fade Away
We used to get to Windsor Jazz Club.
Always there were rumours that the Stones
might turn up.  Somehow they never did –
not any night that we were there.
Usually, we ended up with Kenny Ball.

Keep On Running
Sixty-four, caught Spencer Davis at
the Digbeth Town Hall.   After a rousing start
Steve Winwood spent the evening
trying to break into the locked console
of the grand Edwardian organ
– though without success.

My Generation
Mid Sixties in West London, and the vicar
wanted to put on a youth club dance.
Word got around.
Kids from all over Acton, fledgling Mods,
fired up on speed and beer; out of our hands.
Came close to getting bottled
by a boy, ten years my junior, bog-eyed on pills,
as I attempted to control the door.
Time to move on to jazz.

Tweet
This entry was posted on 30 March, 2017 in homepage and tagged Tony Lucas. Bookmark the permalink.