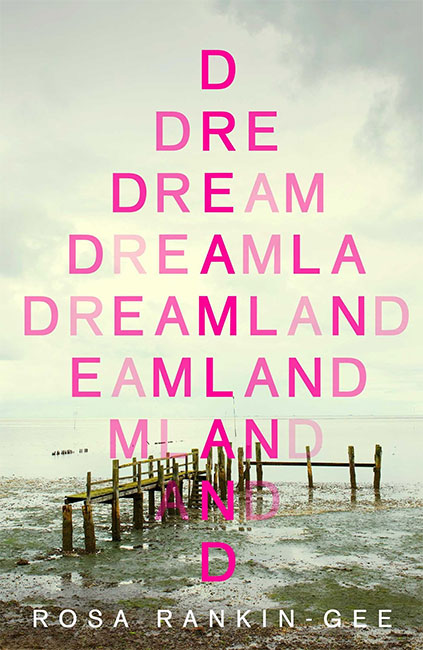 Margate is one of those seaside towns that has had its ups and downs over the years. When I was at cub camp in the 1960s we visited the town for a day, basically to visit Dreamland, the fun fair behind the beach, and ride the wooden rollercoaster, which was so tame – even back then – they called it a ‘scenic railway’. Once upon a time it had been a posh resort but back then it was tired and faded and on its way down, like a lot of seaside towns. Now of course, Margate has been yuppified, house prices are up, second homes are de rigeur, delis and restaurants are on each and every street, pubs are now bars, the Turner gallery hosts hip contemporary art exhibitions, and the funfair has been renovated. It’s become a place to be and be seen in.

Meanwhile, our economy is broken, society is broken, the ecosystem it broken, democracy is broken. Imagine a near future and what will happen when everything is broken… You don’t have to imagine, Rosa Frankin-Gee has done it for you. The government in her book are busy shipping those who are unemployed and sign on as far away from London as possible (out of sight, out of mind), including to a once again impoverished and semi-derelict Margate.

Chance and her brother JD move there with their mum, Jas, who is eager to take the government’s ‘grant’ and start again. She is a heavy drinker, a heavy user – most people are – of kem, a budget locally produced drug cocktail, and prone to having relationships with violent and abusive men. JD supports his sisters by becoming a drug dealer, Jas continues her previous lifestyle whilst sometimes looking after baby Blue, but Chance explores and adopts Margate as home in addition to sharing childcare duties. Throughout the town, she has secret places and rooms, boltholes and balconies, where she can find private space and room to think.

Otherwise, she too has to find alternative income streams. She and her friend Davey become burglars, breaking in to abandoned holiday homes and shops to find things to sell, as well as tinned food and alcohol for their families and friends. Temporary stability is upset, however, when Jas ends one relationship and JD’s business partner Kole moves in, and also moves them to a high-rise flat. He is erratic and violent, even more so as his influence and power builds throughout the town.

Meanwhile, sea levels are rising, tides are getting higher, and supplies are getting scarcer, until the arrival of LandSave, who claim to be working to help the inhabitants, giving them employment building a sea wall, opening subsidised pubs, and eventually offering another chance for relocation to somewhere safer. Meanwhile, an encounter with one of the company’s interns leads to a confused love affair between Chance and Franky, which spirals out of control, as does LandSave’s political manoeuvring and social engineering, leaving Chance, Jas and Davey back where they started.

Dreamland is an energetic, foul-mouthed version of a very English apocalypse. It struts and shouts from the very first page, pretending – like most of its characters – to be in firm control of where it’s going. But, again like those whose story it tells, it pauses for tender or violent diversions, conversations, sex, fights and jokes, drinks and drugs, even a bit of rooftop gardening. Like real life it’s messy, dirty, surprising and sometimes opinionated and naive; it’s also scarily prescient and prophetic. I only hope everyone who reads it understands this is the kind of stuff that is already happening, that happens when people let politicians run the country, when people stop caring for each other, stop being human. This is an entertaining nightmare of a novel, that I can only hope remains a story, not the future.

View all posts by Rupert →
This entry was posted on 28 May, 2022 in homepage and tagged Dreamland, Rosa Frankin-Gee, Rupert Loydell. Bookmark the permalink.