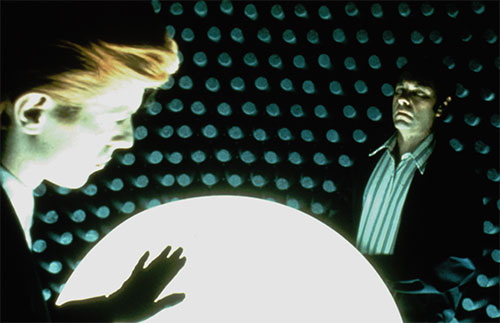 A blazing meteor trail over Colorado—
but this is no star, this is the morning
and it’s breaking up in front of your eyes,
it’s one huge crash-landing. Parts
like body parts, but metal, scattering everywhere
airborne by the blast into neighbouring states.
It’s vast, but the bits are small. The camera hovers.
Smoking fuselage in the snow…green smoke.
A thing of pipes wrapped round a rocky outcrop.
And what is that shape at the lake’s edge…
is it a boat ? We don’t think so.

But this one in the desert’s unmistakeable.
White fragments and a pod like a sleeping bag
reveal a living, skin-coloured breathing figure
pupa out of its chrysalis, shocked-slow
as the subtitle: Alien signalling for help.

And how could your heart not go out to him
landing, blasted out of your mind, through the stratosphere
into an unknown world that is desert, alone
no one and no water, only heat

How could it not ? Only your fear.
He emerges, skin-raw, then half-hides, seems to disappear.

Rumours of humanoid bodies picked up
and kept in a cave behind locked metal doors;
here’s one being dragged in the size of a three year old.

Obama’s smile goes sideways, pauses
his autocue suspended. What did it take
to even get this far
from a parallel earth beyond our imagining ?

An impossibly distant star.
We can’t return the favour, only fantasize
While our planet tilts all around us
tipped into transparent weather, world events, everything.
They must be more advanced, no questions asked.

Coming all this way to invade us ?
A hand, like God’s, reaching out to Adam…
a mission that ended in catastrophe
or sacrifice, depending on how you see it.

How familiar that sounds…

And this is only the beginning.

Tweet
This entry was posted on 30 March, 2017 in homepage and tagged Jay Ramsay. Bookmark the permalink.