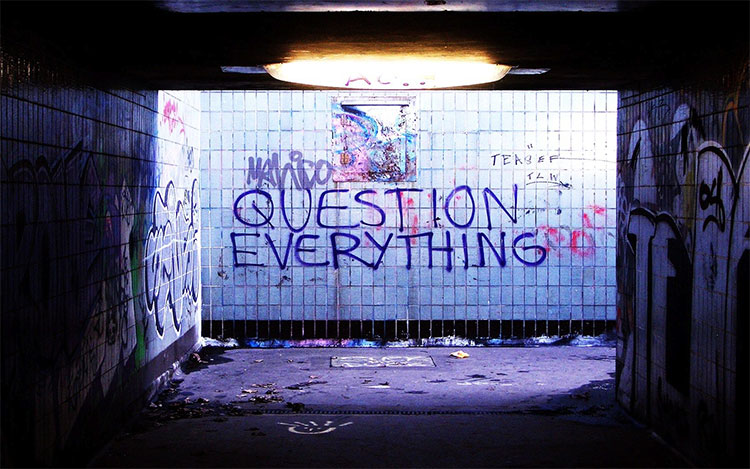 Anarchism is basically about questioning everything assumed and everything held sacred.

As I mentioned in the last article, it’s a thought process, a tendency to mental deconstruction and criticism. In this way, anarchy is not a place without government. Anarchy is the state of being: a collection of billions of individuals worldwide all making more or less informed decisions about how to lead their lives. Anarchism is the recognition that every one of them is of equal value and capacity, even if they don’t believe it, act like it, or get treated like it.

And anarchism therefore finds its most accurate – though necessarily begrudging – political opinion in demanding, proclaiming and supporting democracy. Democracy, that is, in its truest sense, rule by all people and not rule by citizens, nor representatives, nor proletariats, nor market leaders. Everyone at the same time, always. And in a strange way these definitions mean we already exist in an anarchic democracy. The problem comes in our inability to make best use of this natural situation. Our tendency to succumb to worldly powers established in generations of past humans that have tried to restrict our total democratic capacity, so they can live more comfortable lives while greater or fewer thousands suffer.

The UK is most influenced by a Parliamentary Oligarchy – to continue with the use of strange and old Greek words. We invest official governmental authority in an assembly of powerful legislators, meant to represent people who do not choose them, but who are asked to vote for them.
Voting barely includes any kind of opinion, and never – in the UK – brings a popular result.

In 2015, the Conservatives formed a government on the “majority” of 37% of a 66% turnout. That’s 11,334,920 people getting representation versus 51,846,855 people in the general population (figures based on the 2011 Census) being given a government they can still be seen to actively and publicly disagree with. In 2010, 17% of the population determined the Conservatives’ dominant role in government, not forgetting that the Lib Dems abandoned their historical allies, promises to the electorate and ideological roots, too.

That’s nationally. Locally, Hastings, 2016 council elections, the highest turnout was in St Helens Ward: 47.2%. And that was the highest turnout of all wards by 6.3%. The Labour candidate got in by a relatively substantial 50.3% in St Helens. In rough terms, this all amounts to 1,000 people out of 4,000 getting what they voted for. 25% being represented.

You can’t call that democracy, so let’s not pretend it is. The only democracy, surprisingly, is in our all agreeing to continue to exist under this strange arrangement. We lack the self-confidence and perhaps even skill for anything else. But this doesn’t mean we can’t improve. Existence is a testament to the powerful or far-reaching nature of evolution, after all.

More on that next time…

Tweet
This entry was posted on 7 March, 2018 in homepage and tagged British Parliamentary Oligarchy, Merlin Pendragon. Bookmark the permalink.