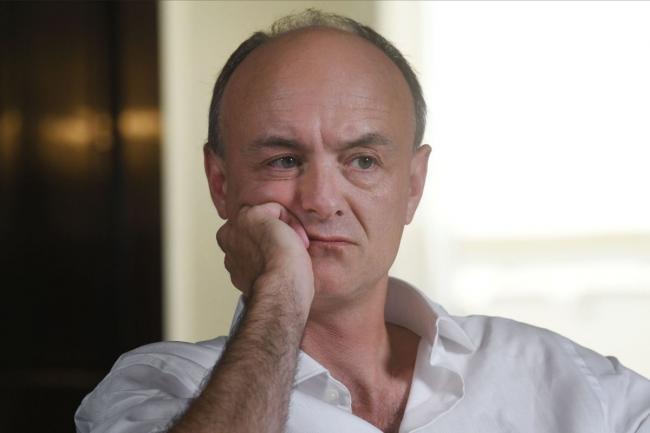 Cancer’s uncured. Covid as we know’s been mishandled. And Dementia still deepens
Even as it shallows out each struck soul, But there has surely been no disease
Greater than the BBC News Specials war across pixlels, infecting sense and screens,
While displaying Desperate Dom in confession as his purging priestess Laura Kuenssberg
Tried to unearth mind filth from dank hole. But then Cummings could make a black hole
Convex, and flex itself back from deep nothing. His guileless stare, part child’s wonder,
Part mad dog at the gate chilled TV, Not through anything fearsome, as such,
Other than the oblivion he seeks for us, but through the disregard and the laughter
He could barely subdue as we grieve. Laura, asking a Sociopath what do you feel?
Or, what do you think? is as useful as attempting to reverse a cremation, and yet
In fanning flames your sense protests and calls for reason and truth widened eyes
That already stare at a slide on which we are the scrutinised germs he spits onto;
He admitted the mistake that is Brexit and how we are the fouled, not the prized.
In writing about him again I risk repeat and take my word, mates, I know that.
But seeing his appearances deepen alongside his need to be deemed battle worn,
As if he were a soldier of faith, boils blood’s kettle and sees me murderous almost,
Wishing that these words were water, scalding him down, spouting scorn.
His evisceration of B was something to behold, and so brazen. Boris has no
Understanding of Whitehall and lets his current squeeze direct juice. He rendered
The Pandemic Pantomime jest and  jape and knew it was ludicrous to be leader,
And is playing with power, as cats will with wool: human sluice. In late February
2020, before anyone understood what had happened, his Wednesday date
With The Queen was still diaried even if he had been proved  positive.
He could have killed her with a  kiss. It was like a plot from the Adam West
Batman, with Johnson as The Penquin and Cummings as Vincent Price’s
Egghead, re-written, with despair as their superpower, we, straight, gay,
Or gated would remain closeted. And still there was more, with Carrie Johnson
Carved as a modern day Cleopatra,  busily masturbating her political Eunuch
For all he is worth to erect dynasties made of dust as the dry jizz fizzes up
Into fury, as Dominic contemplates a new party to replace what we have,
He reflects. He will rear a truly negative republic of cunt; which is afterall
How he sees us; there to be fed, defiled, and life beaten just like the killed
Kenyans over whom his wife’s Grandfather  once ruled. On Television,
Dominic Cummings gleefully pulled out the pin of the garrisoned grenade
We’ve all guarded. He essentially said there was no sense and no order
To the last three years; fact as school.  Kuenssberg ably confronted
And snarled, but editing kept any sense of punishment from him. It had
The same effect as the infamous Number Ten Garden Press Conference;
A concert of lies where said Laura and Robert Peston et al were polite.
So while the revenge he denied was served cold as only a proper pyschopath
Can deliver, this pale parade sought no purpose. It was a Gogglebox grave
For stalled life. It was Big Brother’s Little Brother, for sure, but this one was
Truly related to Orwell’s. Turns out that he does not look like Stalin,
Just this stiff in a shirt stoking strife.  It has all been a farce. we know that.
But in this interview, enter Hitler. Or if not that failed force for bad, then a fury
Which seeks to either change a  known party, or reboot Britain again
With what jack? Certainly not that of the film starring the still accessible
Peter Sellers, but one of different leaders and leather,  and his joke on control
Taken back. This was truly dangerous stuff, no matter what it is you believe in.
Now, disbelief’s the new Holy. As it is impossible to comprehend such a person
Actually doing what this dog has done. His soul’s black. Black is beautiful
When its skin, but when its souls, that sense smoulders.  And so the chaos
Celebrity has been christened. Its That Man Again, coming for you.
Beware the Doom and Dom.
He attacks.
David Erdos July 20th 2021
Tweet

View all posts by David →
This entry was posted on 24 July, 2021 in homepage. Bookmark the permalink.