I first came across Graham Dean’s paintings at one of the Bath Art Fairs back in the 1980s. I noticed them because Peter Gabriel was looking at them but then I looked for myself. Last year some early works I have only ever seen in a catalogue were on show in London and it was quite a revelation to see them full size and on the wall. I’d forgotten how big these watercolours are, and how radical Dean’s use of the medium is.

Those early works were often images of weirdly spotted figures, which turned out to be the symptoms of strange diseases. Others were more straightforward portraits, whilst further works caught humans in strange, sometimes awkward, poses: playing cards, leaning out of a window, climbing a ship’s stairs. All evidenced a fascination with pattern and texture, be that of a person’s shirt, or the way skin slips and slides over skeleton and muscle. 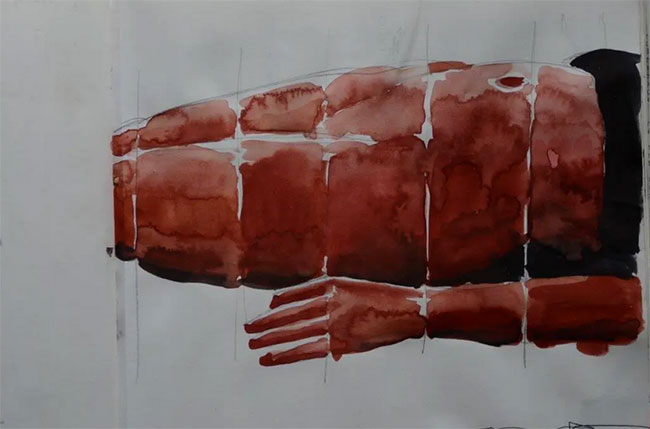 My description makes Dean’s work sound bizarre, but it isn’t. Strange Beauty is an apt title, because these paintings are beautiful, mostly because of how they are made rather than the subjects themselves. The stains and edges, tones and transparent layers of watercolour conjure flesh, water, landscapes out of almost nothing. Dean’s work is mostly about figures, but there are also stunning images of animals, forests and birds here – some of the last juxtaposed with, indeed painted over or behind, images of a boat. The human form is observed from different angles and perspectives, compressed and folded, laid down, turned into unexpected shapes. And Dean also paints figures embracing, as well as the distance between people who are about to kiss or embrace.

In the brief, one page, introduction, the artist explains how he ‘wanted to turn watercolour on its head, to re-energise it, to move it forward, away from its rather fey image’. This involved not only making large works but drawing work on assembled sheets of paper which were then disassembled and worked on separately before a painting was again reassembled, sometimes using torn or displaced sheets to disrupt the expected or planned image.

In addition to hundreds of paintings which constitute a ‘selected works’, the full colour book also contains drawings and ‘workbook’ pages, details, and clusters of work with thematic connections and repeated shapes. I have to admit that part of me wishes the work had been given more room to breathe, and spaced out, also that the book contained an index, details such as the size of the paintings, and some critical and contextualising writing. Not to explain but to help the reader place and understand the work. And because this fantastic artist deserves more than this scrapbook approach offers.

I’ve struggled to watch the accompanying DVD, as none of our computer DVD drives or the DVD player attached to the television like the disc. It ground to a halt, judders, froze and got jammed in the mac I am typing this on. Most of the content turns out to online anyway, which is where I watched it.

The DVD begins and ends with some intriguing experimental films that zoom in on painted details, observe the artist at work, and pan out to give it context. The more recent ‘Waterproof’ from 2014, which offers shots of Dean’s practice, then moves to sea and landscape, is remarkably similar in some ways to 1981’s ‘Undercurrents’ which is the final piece. This features an original Peter Gabriel soundtrack, whilst ‘Painting Music’ uses music by David Rhodes, then of the group Random Hold, to ‘merge the music and the images so they became equally dependent on each other, to create an interesting hybrid’. I think it’s the best thing on here, a marvellous, seductive take on Dean’s painting and thought process.

Elsewhere are more mundane documentation of the art, and an unremarkable, if enthusiastic, interview with the painter, as well as the videos for two Peter Gabriel’s songs: ‘Solsbury Hill’ and ‘In Your Eyes’. They are, to be honest, very much of their time, and visually rather lo-fi and unambitious; simply assembled and edited. Again, this DVD feels rather casually pulled together and produced, and whilst I don’t want the bullshit, ego or false marketing claims that can accompany some fine art, I would like something less scrappy and unfocussed. As I said above, this artist and his work deserves better – better editing and selection, better design, production and product. 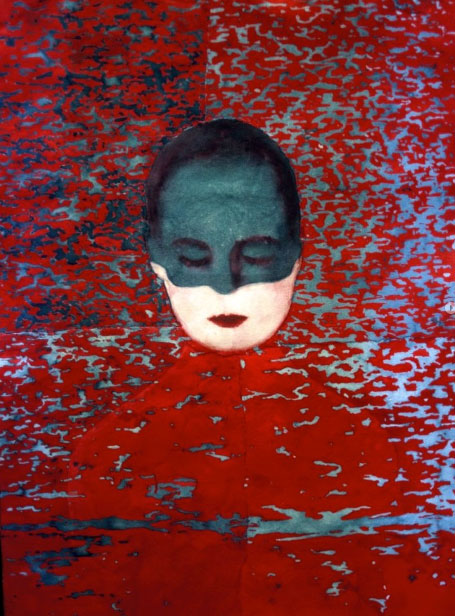 Details of various versions, including a signed hardback with DVD, and a limited edition deluxe edition boxed set with two original Dean art works in, can be found at https://www.gonzomultimedia.co.uk/

View all posts by Rupert →
This entry was posted on 17 September, 2022 in homepage and tagged Graham Dean, Rupert Loydell, Strange Beauty. Bookmark the permalink.