CANDY AND A CURRENT BUN

Posted on 7 September, 2019 by Andrew Darlington 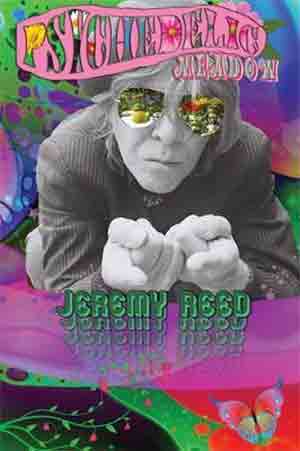 Here in the year of the great leap backwards, Jeremy Reed sits in the Belsize Park Starbucks, wondering, if you could cryogenically freeze previous time-slots, re-thaw them at will, to re-live bits of the past, shuffle, deal them differently, alter the colour-focus of the sky, melt days on your tongue like sugar cubes, how could it be reconfigured? Where we were, and where we are now. This book is an early-1970s litmus, you see the pigment soak in complex colloidal dispersion into the blotting paper pages making Rorschach tests in your head. Set the ambience, fine-tune the mood with a recipe for Normandy Apple Flan, flavoured with cinnamon and powdered cloves, stream the soundtrack with ‘Electric Ladyland’, Velvet Underground, Neil Young, ‘Ogden’s Nut Gone Flake’, Leonard Cohen and ‘SF Sorrow’. Sketch a lysergic bestiary of esoteric acid aliases, UFO microdots, but no Blue Cheer. Add the literary inputs that accelerate breakthroughs in the Grey Room. William Burroughs… of course. Old beat-up Thom Gunn hunting that immaculate fix on Folsom Street. Ed Dorn. And JG Ballard. As British poetry offers only a slow ‘retro-crawl backwards on blown-out tyres,’ Ballard injects dystopian newness. Ballard himself reciprocates by penning an introduction for Reed’s earlier collection ‘West End Survival Kit’ (2009).

Me, you and Jeremy are time-tripping visitors from some Ballardian future, peeking in through a distorting lens, to where thoughts are snapshots taking shape. The pitch is this, that and the other. An age nineteen+ Jeremy and oddball friends use the ruins in the ‘squeezed green’ Waterworks Valley to do LSD, to explore the Politics Of Ecstasy, setting up a sound-system of woofers and tweeters to tune in and turn on. In an ecosystem of itinerant reprobates in the sun, Dave the Dealer, Glenise, Paula Stratton who flies – but Icarus’s back to earth (these poems ‘coloured and shaped by her LSD documentation’), a poem about a dead bug-crawled soldier visited by Rimbaud, and a pet crow called Topsy. Focused around eccentric bibliophile and antiques hoarder John Berger, part of the Paints Family who patented Prussian Blue, who keeps his Corsican mother mummified in the living room of Tivoli. This is the pastoral Psychedelic Meadow, ‘a subversive academy’ that slip-slithers through chemical continua into and out of smiling phases, an ‘edge-of-destruction feel in floaty fog’, a diary of self-loving self-abuse when ‘even standing still was like riding a bike.’ From tripping over a bump in time to tripping into the rainbow’s curve, as luminous gold as honey in a jar. ‘Flying by sitting on the ground.’ There’s a prequel autobiographical prose-poem about how publisher Asa Benveniste sought out young Jeremy in his native Jersey. Another about the lure of indie poetry in small-press magazines, ‘all those under-inked mimeos, on confetti-coloured over-absorbent paper… you miss a phrase, and rewrite it for yourself, to make another.’ But that idyllic summer is pivotal.

Jeremy calls himself an edge-walker. OK, I’ll buy that. I’m sitting reading the book in the garden beneath the lilac tree, when a many-legged flying bug lands precariously on the page. Hey, it’s an edge-walker too. Extro-spective self-mythology and self-historification is a poet’s tool. This is an attempt to understand a time-period defined by a place, and a tripped-up way of seeing, of ‘road-mapping the brain’s information loops’ with ‘a scrunched fist of language.’ Poems are compacted language that inflates in your head. Reverse-time snapshots from which energies glow. Every line he writes has that shine upon it.

Until, studded with poignant strangeness, sitting in that Belsize Park Starbucks today, there are the yearning memory-tug flashbacks that come later, for that lost time when we were ‘too young to know, a nanosecond’s all we get.’ Jeremy carries on stories that others have already quit. Blow away dandelions. Brittle ghosts of a ‘limited timeline written in our veins, how can you cross a thousand years, and make it back to a meadow’? Maybe you can, maybe you can’t, maybe you can, maybe you can’t. It’s cultdom and alchemy, attuned to psychic energy. How do you move beyond sublime? With a subliminal mindfuck, a dayglo fragmentation device? With back-pages from old issues of ‘IT: International Times’. With popping time-pills and feedback, needles and intense pigmentation, hallucinations of drenched hyper-yellow and Prussian Blue. Jeremy hauls poems around the atmosphere’s curve. Wondering ‘maybe we lost it before it happened?’

He re-thaws that cryogenically frozen summer using poems, re-lives bits of that suspended past, shuffles time-slots into different reconfigurations, alters the colour-focus of the sky, melts those lost days on his tongue like sugar cubes. Put ‘psychedelic’ in the title and it makes cool. Psychedelic Furs. Psychedelic Art. Psychedelic mushrooms. ‘I’m on a bus on a psychedelic trip reading murder books and tryin’ to stay hip.’ Psychedelic music. And Psychedelic Meadow. Welcome to the trip. And it is a trip. And it is a trip. Now, there’s only the year of the great leap backwards. Or, just possibly, ‘those times we lived through haven’t arrived yet’?

View all posts by Andrew →
This entry was posted on 7 September, 2019 in homepage and tagged Andrew Darlington, Jeremy Reed, PSYCHEDELIC MEADOW. Bookmark the permalink.