Painting, sculpture and soundscapes by young people from Kids Company.

“They have so much poetry these children, because they have seen the worst of humanity. When they re-engage with life they have deep insight that is absolutely extrodinary.” – Camilla Batmanghelidjh, founder and CEO of the charity Kids Company.

London, sixth richest city in the world, is under the Olympic spotlight, but a hidden London exists where the poorest young people can’t afford to leave their postcode areas. Camilla Batmanghelidjh has seen children so malnourished that they have lost their teeth. Homelessness and hunger is on the increase. The charity currently feeds 2,000 children a week in London who would otherwise go without their main meal of the day.

This show, whilst using Olympic imagery, is not about celebrating Cameron’s Olympic dystopia. In spite of the government’s preoccupation with inquiries, Cameron appears to neither care nor understand that children are literally starving in London and beyond. It’s not part of the R.A. elitist summer show either, but is presented in the building behind that, in Burlington Gardens, made in collaboration with the Royal Academy learning support team.

The artworks are created by young people from the most depleted environments and high-risk neighborhoods, with the therapeutic support of staff and artists at Kids Company. Importantly, the work is a result of a long process involving a crucial and gentle build-up of trust. It tells a story in rare visual and poetic language, of parallel heroic endeavours, and celebrates the courage of the unseen and vulnerable.

The entrance to the exhibition is the the ‘Tunnel of Dreams’, a kaleidoscope of mirrors, beads, and bits of glass. The first room is darkly fairytale. A fifteen foot high wooden cot infantilizes the viewers. Brightly painted sculptures symbolizing fears and nightmares hang underneath the bed. Colored lights cast large shadows on walls recalling childhood fears of the dark.  Two giants, painted with psychedelic patterns, are part of a larger soundscape. Little voices speak out from them, the first with negative messages, such as “Wait, I’ll give you something to think about”, and the second kind and affirming words, “You’ve tried hard, that ‘s all that counts”, and “You are creative and perfect”, “I’m always happy to see you”.

Children who have experienced chronic maltreatment at home find their everyday life is disturbed. It becomes difficult to function in a normal school environment. Often these children are then further punished for not conforming.

The work is reminiscent of the art of the Niki de Saint Phalle, who made brightly painted sculpture and assemblage and drawings. Sexually abused as a child, Niki de Saint Phalle wanted to destroy her childhood memories at all costs. She made a series of shooting paintings, firing pellets of paint which would then explode over figures of men and sculpture of churches and altars. This liberated her creatively, and continued for several years, whilst gentler work appeared, of brides and monsters, assemblages of plastic toys and other small size articles.

In the next rooms a little running track winds around and through the length of the gallery. Each child created an ‘athlete’ figure of him or herself to put on the track to run, ski or swim. It continues across a stairwell like a high wire act of skill and verve. The figures dodge monsters from the ‘Whirlpool of Woe’;  messages appear written by the children on the tracks, “I would like a medal for sleeping on the floor”  or ‘I would like a medal for listening to my Mum’. They run past a puppet theatre section, where younger children have created characters of themselves. One of the frames, as in the current Invisible show at the Hayward Gallery, is empty. A note by the empty frame describes how on the eve of the show the artist ripped out the tiger drawing as she wanted to send it instead to her father in prison, because she missed him so much. 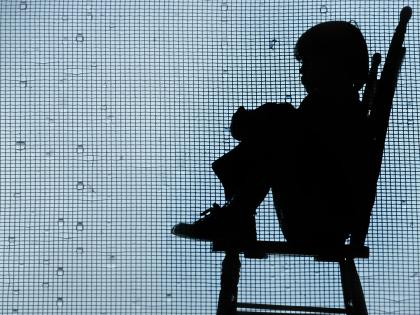 A poem from a 15 year old describes how he does not want to go back to being a drug runner on his estate, and the pressure to belong in a gang: ” I know a place with a running track, But it ends with a concrete wall/This proves that if I run for them, that I won’t run far at all”

There are themes of homelessness and squatting. One extensive installation by a girl called Alley Cat portrays her story of running away from an abusive home with a stuffed toy tiger. She sleeps in a launderette, and a high rise squat and receives food handouts in a park. A note pinned on the sculpture of the launderette reads: “Can you find me? I slept here often. I would wait for the lady to go to the back room. I would sneak in and curl up inside the dryer. It was small and sometimes a little scary. When the lady had locked up I would make a camp on the floor. I often wondered whether the lady knew I was there. I hoped she did. I dreamed she would save me.” The young artist has just won a place to study at university this year.

There are stories of children going hungry, eating dog biscuits, stealing food from supermarkets to survive, or in one case a boy stealing baby formula to feed his baby sister. Another note reads: “Half term was hell”. (The government only give free school meals in term time.)

A series of shelters and safe spaces, beautiful structures built to rest in, describe recovery and the ability to dream and let go. A brain box shows images from brain scans of the damage caused by extreme trauma. Another box contains dreams and nightmares, fears and hopes. Each memory sits in a box with its own key. “Art unfreezes trauma from a state of explosive potency”.

A video installation ‘Wearing my Emotions’ features the children wearing costumes that they made, and explaining the content and ideas behind their creations. The vivid creations hanging on the wall have titles like ‘Spiteful and Shy’ or ‘Cold, Fearful, Lonely, Angry and Shut down’, ‘Excitement’, ‘Anger and Love’.

A poster contrasts the Athlete and the Abused child, the abused child trusting that tomorrow “I’ll wake up and it was just a bad dream”, the athlete trusting that his country loves him.

A toddler-sized papier-mache sculpture, covered in blood, has its heart ripped out of its chest. It seems to be screaming.  It is bravely made by a sexually abused boy.

Elliott Smith songs belong in here. Roman Candle resounds:  ‘He could be cool and cruel to you and me, knew we’d put up with anything, I want to hurt him, I want to give him pain, I’m a roman candle, my head is full of flames, I’m hallucinating, hallucinating, I hear you cry, your tears are cheap, wet hot swollen cheeks, fall asleep, I want to hurt him, make him feel this pretty burn’. Elliott, like one in every 18 children in Britain today, was a self-harmer, once driving a screwdriver through his own hand, and finally committing suicide by stabbing himself through the heart.

Medals to those they love, and winners cups symbolize the triumphs and struggles and letting go.  One 15 year old boy has made two cups: “I’m doing two trophies. One with money and drugs in and the other with my poems. It’s about how my life was and how it is now”… Tyler, aged 21.

One sculpture fills the final room. A dramatic tableau of a beautiful, but limp and broken, child lying on a idealized pink bed, with hearts and stars and Disney princess bed-linen.  Above the bed hangs a medieval looking contraption with several men’s shoes attached; hovering and dominating the air above the child.  In this piece innocence coexists with violence and outrage. It portrays a longing for and the loss of childhood wonder and safety. It is made by a group of survivors of sexual abuse. Reminisent of the work of  Louise Bourgeois, an artist who was in intense analysis herself to overcome the tyrannies in her own childhood home, the piece is a powerful and original piece of work, worthy of a place in a museum collection.

In East London, the Olympic site has a sizeable military presence and surface-to-air missiles on the rooftops. Chosen artistic director of the Olympics, filmmaker Danny Boyle, is making an elaborate English idyll, with real clouds, real children, and real animals. This “green and pleasant land”, inspired by William Blake’s poem ‘Jerusalem’ has run over budget somewhat but the government intends to show the best of England to the world. The Olympics since ancient times have been about nationalism and politics. Blake had problems with the Royal Academy – they wouldn’t grant him the status of academician because he had married an illiterate market trader – but if he were here today he would be standing up for the vulnerable and starving children of London.