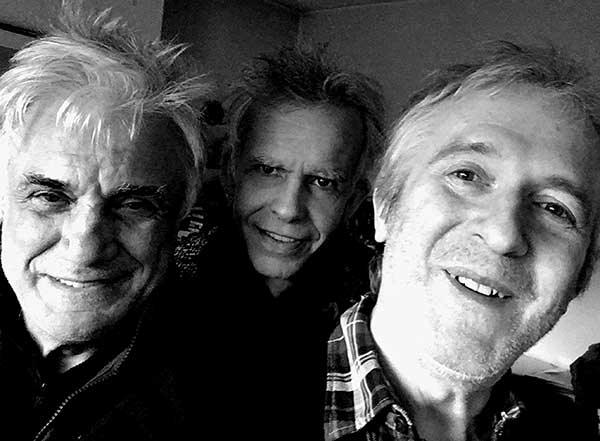 With a double piano statement so begins Ballpark Music,
As if the notes within set the borders for where it is song can go,
Keine Nix avants in as a squealing saxofohn crests the vanguard,
And the bass plods and skitters over Napo Camassa’s prose show;
His poem explains how the work hopes to create a new being,
With spiralling thoughts this strung music catches much of the night
In its sound. Joss Cope and Ian Button chime through with a jazz
Infused mutant soundtrack, that immediately cures and is softened
As the Saucerama seeks ground. Evolved harmonies elongate Brian Wilson,
As a mournful Stewart Staples like crooning is buffeted by Buttons’ drums.
Camassee’s lost saxofohn interweaves sound’s ambition,
As Cope rocks beside him, soothing with baser notes, synth and strum.

Each song gives away to the next as a Dance Away Roxy rhythm
Introdudes Ufohn, which strives to involve listener. By becoming one
With this group that new nation state is established,
in which the sparked waves of music carry us far from the normal;
As with Bartleby, hear the difference; I sit and listen reminded
Of Herman Melville’s Novella, and his sublimely estranged Scrivener.

The collaboration between these three men ushers in modern music.
From Death in Vegas, to Cope’s cosmic songs, to thrashed doves,
Words and music stoke flight in the most experimental of moments
As each line, phrase and signal unites the darkening ground to above.

Heavenly piano prepares Do You Know You to involve us,
A flat note is repeated, reminding us of the threat
That the betrayal of seasons can bring as they move and change
Across stanzas as hurricanes in the oceans disrupts each stranded buoy;
Seas have wept. The music snakes through the air, mellotron escaping
Origins, that saw it birthed in prog, now it seasons the texture
Of dream and of loss. This is what Ride the Future disrupts
With its Blue Oyster Cult guitar figure and Van Der Graaf sax born shrieking
As power and drive pay the cost. ‘Gotta ride the future’ intoned, as both direction
And mantra as the bass throbs and chords clatter and the sound horse is controlled.
Suddenly a muezzin style sax calms the squall and all further sensation,
Before the need pumps the system and those with wronged hearts reclaim soul.

Surfin’Dan Electro tunes in, as the radio finds its focus.
A slowly gathering signal, that murmurs and melds with the past.
This is a beach in which Wilson’s boys have been buried,
As sparks and shards are sent skywards, as each lost musician is playing
Through deadening sand his starred last. This is Ballpark Music indeed,
Which has no conceivable limit, exerting dominion as reverberation enthrals,

Shiny Seeburg’s Luke Haines in all but appearance, as if his Auteurs
Are now sequelled to roll through tempered surf, death’s slow ball.
Slow motion spirits are felt in this tightly reigned lyric
In which those precious Beach Boys are quoted; SMILE is ‘sliced lemon,’
And a ‘bicycle ride between palms.’ It is as if America is reset
By an Italian man and two English, reshaped, retranslated
So as to restore inner calm.
The Scenenaut sets this straight,
As ‘the inner of you’ sells the darkness. The music beneath,
A soft dreamscape, which has a Bauhaus style ambience,
This soon transmutes into Wilson and co. for an instant,
Before the stately bass underscores it with a Velvet Underground
Spiralled trance.

Wilson Mitt tells the tale of the ‘eyes of a dreamer’
In the middle of ‘the world’s highway,’ a spoken word poem,
That Dante had he had his own synth might have spun.
This makes this record move past initial expectation
As it becomes a ‘spokesobject’ for all of the secret dreams life’s begun.
The words are cast here like notes as a rising synth sparks beneath them.
Song becomes poem and musical soundtrack traps art.

Ol Balm seals the deal. Electric bells and blurred echo.
This is Crimson King music, a mixture of blues, stars and chaos
And the poetic pulse of the heart. Three men reshape song
To find it again within sculpture. They appear on the field after midnight
To capture the secret protestations of dark. Place your ear to the light
That they have striven to unearth from such distance.
Prise open the sound and aspire. The song as it fills you,
Will both change and charm you and eternally leave its mark.

The new baptism is here in which the rebirthing water is music.
This umlauted nounster has created for us a new way
To think about song as if the choices within were a mirror
Revealing to us as we listen the reflections behind sight’s first say.

Gentlemen, play what you feel, and what moves within you.
Combine inspiration to repopulate the next day. 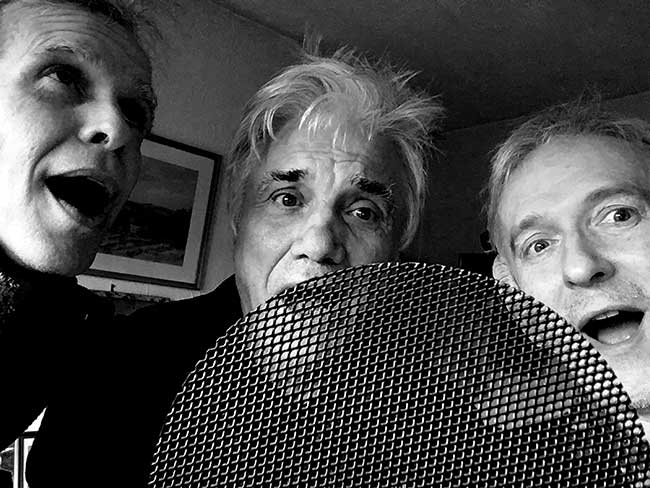 One Response to FOHN THE BAPTISTS