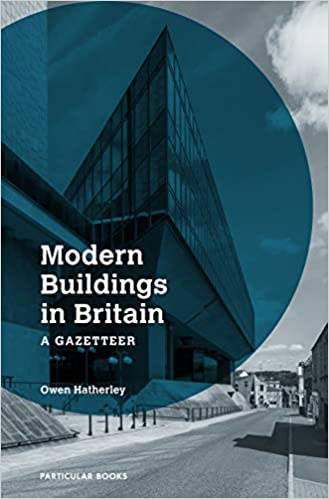 This is a fantastic book if you are at all interested in 20th and 21st century architecture. Hatherley unapologetically champions the houses, civic buildings, street architecture, workplaces and shops that have been so wrongly maligned and discredited over the years. (Usually by the likes of Prince Charles who prefer buildings and villages as Toytown pastiches of the past.) This isn’t to say Hatherley isn’t critical when he wants to be: he is unafraid to be forthright and mildly abusive about buildings he does, sometimes it has to be said, buildings that I think are wonderful! And of course, the opposite is true: he praises the likes of the UEA ziggurat student accommodation buildings, which may be fantastic on the outside but whose interiors are a kind of unusable overdesigned hell.

But I quibble. In the main Hatherley functions as an erudite and informative tour guide, offering brief histories, technical specifications in everyday language, history and context, in addition to his opinion. The book starts with an informative overview of architecture and idealism in the 20th century, with nods to planning, new cities, cultural aspiration as well as critical and public responses, before offering a short series of definitions. Then it is on to the gazetteer itself, organised by region, with several specific cities and areas within each section. There are plenty of black and white photographs (though not every entry has one) along with several sections of colour photographs.

As Hatherley says, this isn’t a book to read from front to back, it’s one to dip into; one to check out where you live or where you are visiting, follow trails left by an architect or architectural practice, or read what Hatherley stars as essential or marks with an exclamation mark to note that it is in danger of demolition. So I have been checking out not only London where I grew up and Cornwall where I live now, but Newcastle where my daughter lives. It’s opened my eyes to a number of buildings I’ve walked by and areas I’ve walked through without paying attention, explained some of the concrete anomalies which are the result of half-completed regeneration projects, and given me a list of stuff to look out for.

It’s also added to my enthusiasm for concrete, cityscapes and utopian idealism, for innovative engineering and forward thinking housing design. Most of the problems that have afflicted modern buildings are not architectural, they are problems of maintenance or social deprivation, civic short-sightedness, political ignorance or the result of irresponsible builders (cf. Grenfell Tower). When architects work with their clients and those who are actually going to inhabit or use the buildings and gardens they design, the result can be what many of the entries in this book showcase: glorious combinations of spaces, views, walls, materials, lines, curves and light.

View all posts by Rupert →
This entry was posted on 26 March, 2022 in homepage and tagged Rupert Loydell. Bookmark the permalink.