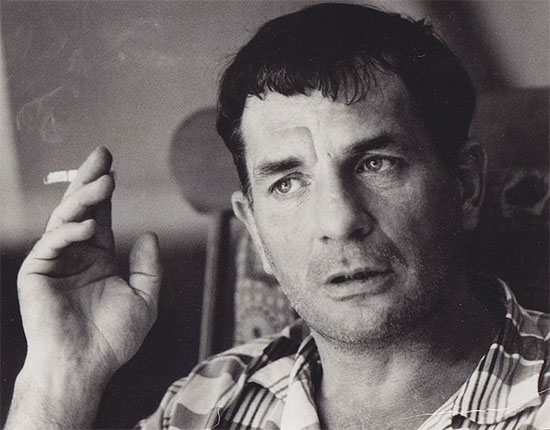 In the early 60s, when I was 16, the high school English teacher of a friend who’d moved to Arizona mailed me a half-dozen books I’ve come to think of as “the Beat packet.” This teacher, who boasted shirttail connections to the Beat scene in California, inadvertently introduced me to the avant garde of contemporary American literature: Ginsberg’s Howl, Corso’s Gasoline, Ferlinghetti’s A Coney Island of the Mind, and Kerouac’s On the Road —altogether they were the Holy Grail of esoteric adult experience to a teenager living in a small northern Wisconsin mill town.

No matter that I hardly understood a word of it—I have always had a high tolerance for mystery. Of all these writers, Kerouac proved to be strangely the most relateable to my own life and so the most useful to me personally. Maybe it was the common fact of growing up in mill towns, his Lowell, Massachusetts of textile mills and my paper mill town, Cornell, Wisconsin, though the cultures of these two places couldn’t be more different.

Maybe it was our mutual dissatisfaction with the world, and specifically the Americas into which we came of age, he rejecting the mechanized “Moloch” America became when it shifted to a permanent wartime economy after World War II and myself of an age to reject the senseless waste of lives in Southeast Asia by the Vietnam money-war machine.

Kerouac a “Beat,” a term he coined but disavowed, and I a hippie, uncertain heir of the Beats’ rebellion.

The upshot is that I spent most of my twenties on the road to one place or another, never sure exactly why I was traveling except to escape the doom I was certain would drop upon my back if I stopped. And maybe that too was a way I resembled Kerouac. Although Jack is often caricatured as an arms-wide-open, life-affirming free spirit, that was only part of him and maybe not the best or most important part. You don’t have to read far in him to see the troubled Kerouac, who even after 100 pages of his most rapturous prose in The Dharma Bums descends from that mountain peak, for the rest of the book, into modulated melancholy and disappointment.

That Kerouac is the mystical Catholic-Buddhist Kerouac who for all his celebration of jazz, sex, and kicks could never find a home in this world and who ended in alcoholic desolation, dying from a massive abdominal hemorrhage at the age of 47 while living with his mother in St. Petersburg, Florida. When in a 1958 interview Mike Wallace observed, “You don’t sound happy,” Kerouac responded, “Oh, I’m tremendously sad. I’m in great despair.” I believe that that thread of profound melancholy combined with Kerouac’s tenderness is what ultimately keeps us emotionally tethered to this spectacular writer who was so unable to form a consistently life-sustaining relationship with the phenomenal world.

Most of us who read and romanticized Kerouac and participated in what Gary Snyder’s character in The Dharma Bums called a “rucksack revolution” had no real inkling of the horrors of addiction our hero suffered, the binges and withdrawals, the self-disgust and soul-sickness. Kerouac’s friend John Clellon Holmes reports sadly that in his last years Kerouac was downing more than a fifth of Courvoisier each day.

I had a fortuitous connection of sorts with Kerouac. In 1970, the year after he died, I followed a college girlfriend to St. Pete in hopes of propping up a shaky romance. Didn’t work, but that’s another story. Robin’s father Claude was a social worker in the Tampa Bay area, and when I learned that he’d actually hung out with Kerouac, I was eager to hear more. As we’d say now, a single degree of separation!

Pressed for details, Claude told me that he and Jack Kerouac had both patronized a bar called the Boar’s Head near downtown St. Pete, which I passed in my wanderings many times. Among the regular clientele was an insanely violent drunk who once literally bit off someone’s nose. When this man got juiced up to do some harm, Claude said, Kerouac was the one who could gentle him out of it. Kerouac, with his deep compassion for suffering humankind, who himself lived in a state of spiritual suffering for which alcohol became the convenient medication, must have seen enough of his own darkness and common humanity in this savage character to somehow quell his rage and calm him down.

I treasure that story, as I treasure the page I ripped out of the St. Petersburg phone book that still listed Kerouac the year after his death, now in fact his mother’s number I hadn’t dared to call, knowing her dim view of the vagabonds and hangers-on who adopted her “Ti Jean” as their patron saint of the road. As I myself did, and as a consequence was blessed, it may be, for a little while with safe passage in this world.

Tweet
This entry was posted on 26 March, 2022 in homepage and tagged Thomas R. Smith. Bookmark the permalink.