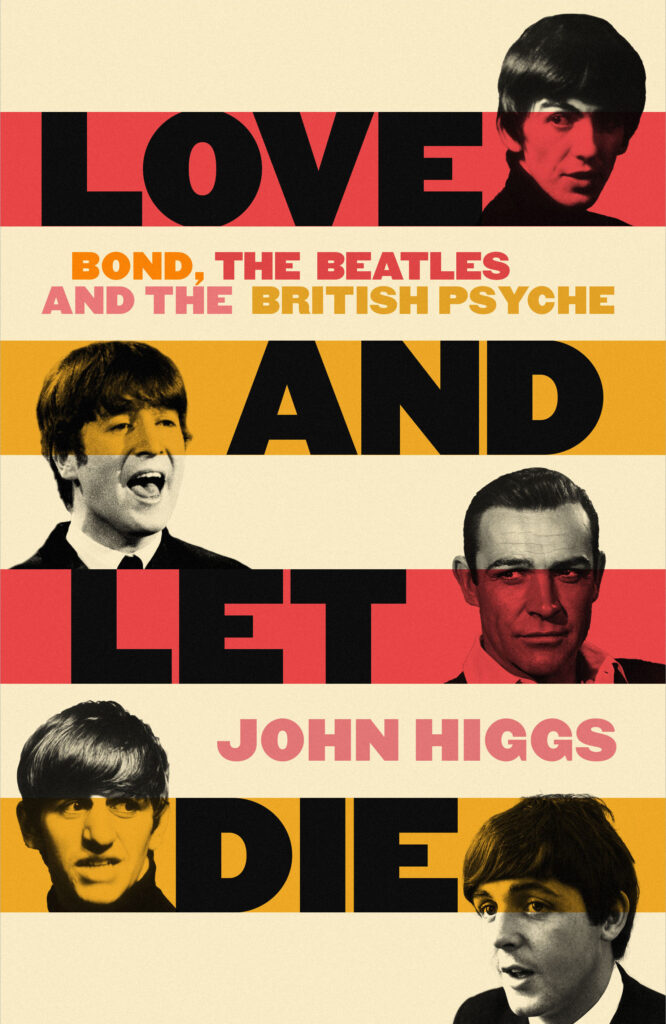 John Higgs new book burrows into The Beatles. while unearthing
James Bond as he does so; an ingenious harvest in which
Every chapter reveals and sifts soil from our psyche.

For this is a British born book which seeks to understand
What has happened as the Brexit bound move
From the Love Me Do of The Beatles, to Bond’s love me

Do not, as death strikes.  His license to kill contains the Greek
Thanatos death drive, just as John, Paul, George and Ringo
Epitomised the love of Eros. This comprehensive book shows

How these two totems clash to educate and achieve definition,
By both soundtracking and marking how our thrawted journey
And rolling of stones retained moss. People will be enchanted

To hear that the same year brought both to us: 1962.
That first single and then Dr. No’s cinema premiere. Sixty years on
We still exist under the spectre and on the spectrum

Between the twin poles of the Beatles’ need for affection
And Bond’s screed of destruction as he set forth to kill, without care.
Higgs examines these states with his usual clear-eyed gaze

And determines the steps society took after Hugh Gaitskell
Spoke on the European Common Market that year;
Steps that seemed to swell with the tide, revealing at once

Whim as water, whether yielding Ursula near undressed in bikini,
Or those of sense separated from the mainlands abroad,
By fresh tears. From Ringo’s childhood sickness that the Welfare

State cured, Higgs moves onto Ian Fleming’s distemper,
As his reluctance to marry in 1952 begins Bond, whose misogyny
Froths from Fleming’s own background, to make his nearly

Certifiable psycho, just as ten years later, the Fab Four move
Beyond their own middle class/working class, into an avant-garde
Graduation.  In just six years they move music  and perception itself

Far ahead of where we are now and of where it is we are going.
While Bond, despite re-birth remains too fatalistically bound
To the dead.  The connections abound in this book. From Fleming’s

Articles about the red lights of Hamburg in 1960 – when the proto
Fabs  were playing there – to Fleming’s wife fucking Gaitskell; to the plot
Of HELP being Bond-like, to the psychedelic and near symphonic

Structure of designer Ken Adam’s sets. The times had a-changed,
And while Dylan called it out, the curators were these Liverpudlian
Legends, who, as in Joe Orton’s unfilmed screenplay

Up Against It, become a four headed hero,  with Bond himself
As the villain due to the standards and moraies that Fleming
Could not bring himself to forget. And  yet the strands between them

Weave on, from Sean Connery’s violence and wig, to the mania
Of the Mop-tops; from Barbara Bach, an ex Bond-girl marrying
Ringo Starr; to Christopher Lee a cousin of sorts, to Fleming

And Wings cover player, not to mention the theme song
That at the time saved McCartney,  as the success of Live and Let Die
Restored favour  after Ram and McCartney I revealed competition.

Ringo and George were front runners, so for Paul at least,
This healed all scars. But just as he had struggled solo, so Bond, too,
Had suffered. Waning under Roger Moore, like the women

Who were too young to stay next to him, both mainstays revealed
The uncertainties of a country which was already stumbling,
As its so called ideals were worn thin. Higgs shows the bass-line

Beneath the frequencies four friends charted as well as the currents
That those who once led tried to spark; from Fleming’s upper crust,
Which left a bad taste, once tested, with racism and sexism lurking

Like mould on the meat, or brand mark. After those bright mid-60s
Days, Bond soon ballooned into the parodic, from Casino Royale,
Damned by Sellers, to Lee’s three nippled man with the gun.

All while The Beatles progressed, from Sgt Pepper,
Through to All Things Must Pass and Imagine, and eventually
Paul’s celebrated Band on the run. Strawberry Fields is the name

Of a Brosnian Bond-girl, the venn-diagram flexing to contain
Reference to the worlds we would make if we had either
The time or the talent. Which the Beatles did, while those

Bonded, or branded forsook for commercial means, relevance.
By telling each tale, from the life of Lennon and Lee to that
Of Desmond Llwellyn, to the deaths of John and George,

Whose assailants could well have been KGB. And indeed,
We see Putin parade in Red Square watching a McCartney gig
In the 90s. Born in the year Bond was started this, as with

All the digs Higgs describes, is so much more, and much deeper
Than just cultural history. Higgs works the room and the loom,
Sewing the strands, guiding colours;  exploring the details,

Even as he relates common fact.  An expert teacher with gags,
He blows the Paul is Dead blag from the water, as if they did
Replace him, then it was the most effective piece of recasting

To find someone who wrote and played as well as McCartney:
As even their hoaxes had standards, as high as clouds, or the astral
And part of a clearly God-given contract! As with all of Higgs books,

Be they on Bill Blake or Bill Drummond, this scrutiny of the forces
That have had the greatest impact is wonderfully done by this erudite,
And more importantly, accessible author. Time itself is the thesis,

Primed for the white-boarded page where he writes,
Which is a pulpit, too, from which he can preach about populism
And reveal how behind it, the powers we need reconnect

To primal forces; to fame, as well as survival. What we choose
To be fans of, or follow is part of the way we reflect
And try to live life, while dealing with the dreams and desires

That we do not understand or determine. Love and Let Die.
The pun pin us. But by combining two titles and two diverse
Approaches to art Higgs inspects the hidden motive and howl

That first made Lizzy dizzy and Lennon scream for his mother,
On every day since her death.  Just as we did for him, or just as
James did when in George Lazenby’s mouth Bond got married.

Only to lose his wife in a car-crash, and just as Roger, Sean
And George lost their breath.  Well, life is all car-crash now.
But this book is a rich ride and journey. From Avatars to Song Angels,

We see both exit and entrance. The times are exchanging.

But the glory goes on.

View all posts by David →
This entry was posted on 24 September, 2022 in homepage and tagged beatles, David Erdos, James Bond, John Higgs. Bookmark the permalink.