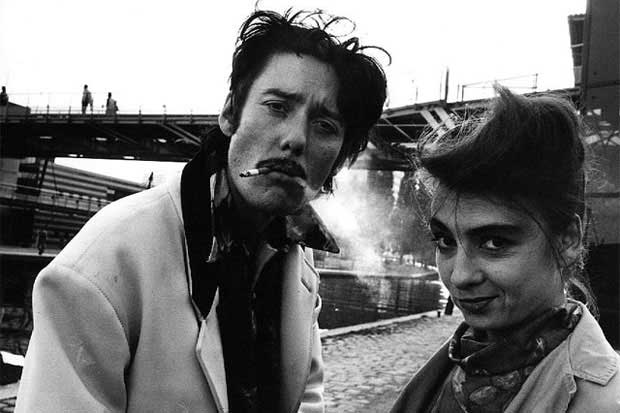 The story of punk rock has become a decidedly British affair, through its many retellings, with the Sex Pistols providing its Anarchy in the UK strapline as well as its chief emblem – the Queen with a safety-pinned face.

Sure, the Americans got in first musically with their scene at venerated New York punk club CBGB – where bands like Blondie, Television and The Ramones were on stage from as early as 1974 – but the social impact of British punk was more profound and its ramifications more lasting.

There is, though, another essential part of the story that has been forgotten by all but the staunchest connoisseur, and that is the contribution of the French.

“Punk rock would have happened in the UK without France,” said Andrew Hussey, head of French and Comparative Studies at the University of London Institute in Paris.

He believes the confrontational attitude and much of the thinking behind punk came from across the Channel rather than the Atlantic.

“The real influence of French punk rock lies in the ideas, the style and the ruthless elegance – they never produced a (British bands) Clash or a Sex Pistols, but what they did was introduce the real politics in punk.”

The roots of those politics, Hussey said, were to be found in a movement of intellectuals and rebels who became known as the Situationists.

These characters, led by rebel extraordinaire Guy Debord, were dead set on cultural subversion, changing the world through art and ideas.

Or listen online on iPlayer

They enjoyed their most notorious moment by providing the philosophical muscle to the Paris riots of May ’68, when students and workers took to the streets to attack the state.

This was disorder versus authority, youthful zeal versus a sclerotic status quo, and it was a direct inspiration of punk.

Now deified as arguably punk’s most important individual, Malcolm McLaren, who went on to become the Sex Pistols’ manager and helped cement punk style, was then an impressionable young rebel looking for direction.

The Francophile dashed across to France in the aftermath of the riots and was seduced by Situationist posters and slogans like, “Be realistic, demand the impossible” and others that would later feed straight into Sex Pistols lyrics, “Cheap holidays in other people’s misery” and “No future”.

Situationist thinking, McLaren said, “was bleeding from Paris into England”, and others soon caught on.

The man behind the Manchester punk scene, Tony Wilson, went on to name his club the Hacienda after a Situationist text, while arguably punk’s most important artist Jamie Reid became a master of detournement, flipping images directly against themselves and subverting them so they became cultural weapons.

Perhaps the most famous example was his cover for the Sex Pistols’ famously banned single, God Save the Queen.

One of the natural products and great evils of Western life was boredom, according to the Situationists, and punks felt very much the same.

“Everyday life was extremely boring, you felt people needed a push so they’d feel alive – the idea was to stir the pot and see what happened and of course people in England were doing the same.”

In New York, the US proto-punks looked further back for Gallic inspiration.

But it was not just a story of influence, either. France’s very own punk scene was taking shape if anything slightly earlier than the UK’s.

Europe’s first punk festival took place at Mont-de-Marsan, Aquitaine in 1976, and was organised by Marc Zermati.

Zermati said the French felt close to the US scene: “The real punk movement started in New York and Paris came before the UK because we were really connected to New York… it was exciting because we thought we were conspiring against the establishment.”

He said it was in his record shop in Les Halles, Paris that he persuaded McLaren to call the movement punk rather than New Wave, which McLaren preferred for its overtones of the French “Nouvelle Vague” movement of the early 60s.

The French bands were not quite the equal of the best of their foreign counterparts, which is perhaps why their contribution has been largely forgotten.

But they marked a major step forward for popular music domestically.

The US and the UK had been leaders of the musical pack since the birth of rock and roll, while France lagged far behind, providing dismal rehashes of a succession of musical movements long after those scenes had become passe on their home soil.

With punk, for the first time, French groups were in the thick of things from the get-go, undeferential and deeply committed to the cause.

“Everything had so much energy, like you were screaming all the time,” she said.

“It was a bit like sometimes you think it must have been in the 30s or 50s – not in music but those moments when there’s really a movement where everyone knows each other and you’re always together, and it was just like that in 75 and 76.

“It was like a whole world – you had Paris and then you had ‘our’ Paris – the music and the fashion, our own world inside the city.”

Now rebel extraordinaire Guy Debord has been proclaimed a “tresor national” (national treasure) by the French state, and, hip-hop aside, music is now rarely the vehicle for rebellion that it most certainly was then.

Remi Pepin, whose book Rebelles examines French punk, said: “The idea was to create things out of chaos. We were definitely into revolution. We were against – that was the point.”

Tweet
This entry was posted on 6 June, 2018 in homepage. Bookmark the permalink.