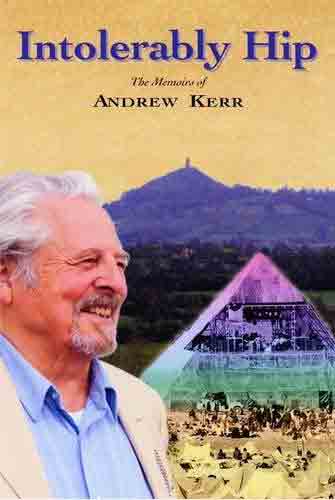 Intolerably Hip, the autobiography of Andrew Kerr – a kind of review by Alan Dearling

Occasionally, or perhaps more often than that, an interesting or possibly even great book or music album slips through the proverbial ‘net’ of life. This book is one of them. It was published by Frontier Publishing, based in Norfolk, in 2011. They tried hard to promote it. Richard Barnes, from the publishers told me: “We did not get nearly enough coverage for Andrew, and he did want a big response. I’m guessing you knew Andrew and the kind of person he was. We had a ‘Spirit of ‘71’ field at the 2011 Glasto. Howard Marks slightly stole the crowd in the talking tent in the field.”

Andrew Kerr, along with Randolph Churchill’s daughter, Arabella (she was just 21) and a couple of other chums, including Mark Irons (brother of actor, Jeremy) organised the free event at Worthy Farm, home of Michael Eavis.  It was called the Glastonbury Fair of 1971. Andrew’s company was appropriately called ‘Solstice Capers Ltd’. I have some personal synchronicities with Andrew. He has connections with the Scottish Borders where I live, his family, the Kerrs, were originally the residents of Ferniehurst in Jedburgh, probably in the late 16th century. I was born in West Sussex, likewise Andrew, whose parents originally lived in Chichester. His birth was in 1933, mine in 1951. He was already relatively middle aged in the early ‘70s when Michael Eavis dubbed him the “rich hippy!”, which he much resented, stating that he had never been rich. I met Andrew a couple of times, but we weren’t mates. I’m much more a music person and have many friends in the sometimes fairly challenging Convoy/Traveller/Sound System scenes that have rocked and boomed out over Stonehenge and the fields of Worthy Farm. My guess is that Andrew never really knew much about the 1960s and early ‘70s music-scene. This view has been reinforced by reading this fascinating book. He talks a lot in terms of lists of performers, but rarely about their actual music.

Andrew’s personal ‘trip’ was more cerebral. He was a kind of hippy missionary. At times pursued with a quasi-religious fervour. Like me he’d been at the 1970 Isle of Wight Festival where he’d witnessed violence, probably in far greater profusion than any peace and love. Also like me, he’d previously attended the messy Mick Farren (dis-) organised Phun City festival held near Worthing. But, it was the Bath Festival of Blues and Progressive Music, actually held at the showground at Shepton Mallet, which was closest to his ideal festival.

Post- the Isle of Wight event, he’d obviously been captivated by the spirit of the young people, and he returned to his London home proclaiming that: “We’ve got to have proper festival, one that has some cosmic significance.” Andrew’s book, like his life, is a chameleon that is forever shape-shifting. An odd and extraordinarily eclectic  mix of rant, hyperbole, rich kid gone missing, cosmology, ecology, yacht charters, historical research and writing, spinning-wool, spirituality, stone-walling, composting and natural funerals, crofting and ‘stories’. Lots and lots of highly personal accounts of the people he worked and socialised with, from the international glitterati of the Kennedys, Rothschilds, the Guinness family, the Churchills, through to mystics like John Michell, artist Salvador Dali, Jimi Hendrix, Michael Eavis, Ginger Baker and members of the Grateful Dead. Some ‘cast list’, you have to agree, and that’s just a few of them…

“Perhaps I am an infinitivist”

What comes through loud and clear is Andrew’s resilience. ‘Infinitivist’ is the word he used to describe himself. He exhibited amazing fortitude to ‘bounce back’ after financial, physical and relationship ‘challenges’ and to re-invent himself. He tells us that his autobiography is a recounting of the ‘adventure’ of his life, saying: “So, I might as well start the story at the beginning, go on until I come to the end: then stop’, as the King said in ‘Alice’s Adventures in Wonderland’.”

His early years were profoundly unpromising. But his birthright was the prestige and social connections of his family. Like Winston Churchill, Andrew Kerr could trace his ancestry back through a couple of female lines to the first Duke of Marlborough. From an undistinguished public school education at Radley (the cricketer Ted Dexter was one of his contemporaries), dyslexia, and a farming childhood in the 1940s, time in the Navy as a stores-man in HMS Dolphin in Gosport, he was often referred to by his older siblings as “the ape”. But there were plenty of well-shod people in his circle of family and friends, such that he was frequently surrounded by the extremely rich and influential people of his day.

Andrew Kerr’s longest period of work in the 1960s was in the employ of Randolph Churchill, later being engaged as a researcher upon the first three volumes of the official biography of Randolph’s father, Sir Winston. Randolph and Andrew were very different characters, but both enjoyed travel, the company of the rich and famous and plenty of good food and drink. We learn a lot about their adventures together in the book. For example, at Hickory Hill in Washington, Andrew remembers,

“Bobby (Kennedy) opened the door and after he had welcomed us, he pointed to me and said, ‘Who’s that?!’ Randolph said, ‘I told you, it’s my friend Andrew Kerr.’ ‘Does he eat a lot?’ ‘No, not very much.’ We went in for drinks in front of the fire. Teddy Kennedy rushed through, freshly out of the swimming pool, exchanged greetings and left. After more badinage, he said to me, ‘Why are you working for that old fool? Why don’t you come and work for me?’ Randolph said, ‘Stop trying to steal my staff.’ “

However, after Randolph died in 1968, his son ‘young’ Winston complained that Andrew had gone “intolerably hip”. Such is the effect on some of us of exposure to the muddy fields of festival life!

Michael Eavis had held an event called the Pilton Pop Festival at Worthy Farm in 1970, but  Frontier Publishing contend that, “… it was Kerr’s spiritual and environmental ideology which linked Glastonbury Fair to the Solstice celebrations and the landscape of Avalon” with its ley lines, and connections with Joseph of Arimathea, possibly Jesus, the Holy Grail and the Glastonbury Zodiac.

Here’s another quote from Frontier Publishing regarding Andrew Kerr’s Glastonbury Fair in 1971: “The iconic pyramid stage, inspired by his old friend, John Michell (author of ‘View over Atlantis’), was sited to face the midsummer sunrise. The musicians played at their own expense. The valley (the Vale of Avalon) and Tor worked their magic, the sun shone and entry was free. Kerr’s aim for the whole thing? To conserve natural resources, to respect life and to awaken the spirit. Our man had spent all his cash on Glastonbury, but he was right on target: England had been waiting for this!”

In the book, there are a rich variety of contemporary accounts and documents about the Glastonbury Fair and later festivals, especially during the CND period. One that provides a rich vein of hippy-verbiage – very much of its time – is from Andrew’s close friend, Martin E Shallon. Here’s an excerpt from Martin:

“The location, Glastonbury, Somerset, England, the man in the middle was Andrew Kerr, the farm called Worthy, and the dream to tap the universe. It costs a lot of money to have a dream like that. With help from Arabella Churchill, co-operation from 38 kindly bands, an architect, a retired rock journalist and two radio freaks, a lot of good shit went down in July (sic) of seventy-one for a week of free everything in which everyone gave the same And like all good dreams, it came true, and like any dream involved an awakening.”

Andrew recounts the unfolding tales surrounding the Glastonbury Fair like a teenage school boy. It’s a tale of water-divining, the design and building of a pyramid stage, as a one-tenth scale model of the one at Giza (a winter barn for Michael Eavis!), funding (and losing), with Arabella Churchill, up to £15,000 to finance the event, which was attended by somewhere between 4,000 and 15,000 free-festival punters, depending on the source quoted by Andrew. You also get lots of tasty anecdotes and info about the preparation for, and publicity for the event, and the triple vinyl LP (Glastonbury Fayre) that was put on sale as a fund-raiser after the event featuring some of the bands who played and the Grateful Dead, who didn’t. Andrew described 1971’s Glastonbury Fair as:

“A fair in the medieval tradition, embodying the legends of the area, with music, dance, poetry, theatre lights and the opportunities for spontaneous entertainments. There will be no monetary profit – it will be free…a spiritual awakening.”

As I made my way through the myriad episodic ‘adventures’ in Andrew Kerr’s autobiography, it struck me that he was a man with the power to enable other people to re-shape their lives, but seemed to float somewhat rudderless through his own.

In the period after the Glastonbury Fair, he probably needed a complete break from Sacred Geometry, festivals and Worthy Farm. He moved with his partner, Jytte, to live on the Scoraig Peninsula, a Scottish crofting community in Wester Ross. The tales from this time capture the realities of subsistence crafting, a few experiments with LSD, visits from friends and then the parting of their ways in 1977. As, Frontier Publishing put it, “Andrew then set off for a variety of yachting jobs to discover all the problems one could possibly have with a boat. Another wave of idealism had him back in the West country putting on the first and only ‘Whole Earth Show’ in 1992.”

It featured much about organics, composting, living more sustainably. It was another financial mess, which Andrew describes saying, “My personal resources were cleaned out when the dust had settled….it was a financial disaster but its ethics were sound.”

Actually, Andrew had spent a lot of the 1980s back at Worthy Farm helping Michael Eavis and others in the organisation and management of the Glastonbury Festivals and there are some hilarious stories of his life at the farm and being in charge of paying both litter pickers and bands.

Another point of synchronicity between myself and Andrew was our mutual friend, Nicholas Albery. I had met Nicholas in connection with the infamous squat in Notting Hill which was known as the self-styled free republic of Frestonia and later as a contributor to his ‘Ideas Bank, and the ‘Encyclopaedia of Social Inventions’. Andrew was involved with him and the ideas in his publication, ‘The Natural Death Handbook’. Andrew was much taken with the idea of naturally composting bodies! Nicholas was another zany character, much missed in the UK’s counter-culture.

“As autobiographers go, Kerr is an ideal type”, say the Frontier publishers. “He’s generous yet light-handed and understated at turns while recounting some tricky situations in a life of opposites. The pages are enlivened by contradictory characters, from rock stars, music lovers, crofters and druids to world statesmen, royalty, trillionaires and bloodthirsty generals. It’s a good story and he’s a storyteller through and through”.

Andrew Kerr toddled off the mortal coil into what he refers to as the ‘Light of Eternal Creation’ in 2014. I hope that he got his final wish, which he describes in the final lines of the ‘Intolerably Hip’:

“As JM Barrie says in ‘Peter and Wendy’, ‘To die will be an awfully big adventure’.”

Go and find yourself a copy of Andrew Kerr’s ‘Intolerably Hip’ – you won’t regret it! 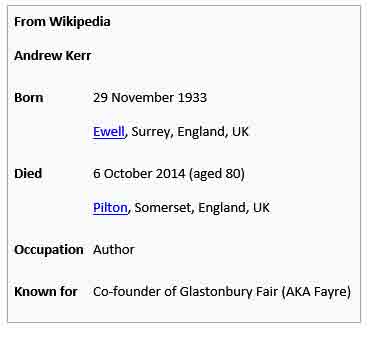 Tweet
This entry was posted on 29 August, 2020 in homepage and tagged Alan Dearling, Intolerably Hip, the autobiography of Andrew Kerr. Bookmark the permalink.