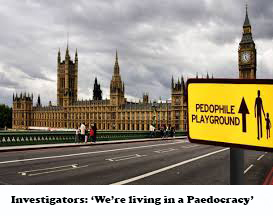 Investigators looking into claims of a child sex ring operating in the Houses of Westminster have found themselves at the centre of a bitter dispute between themselves and MPs after describing the workings of high-level government as a ‘Paeodocracy.’ Timothy Saint, who first coined the phrase, defended the term saying,’ I’m sorry but after going through all the evidence it seems the only technically correct word for describing what goes on in the upper echelons of government is ‘Paeodocracy’.’

When asked to qualify his remarks Mr Saint continued, ‘Obviously the prime reason is the government’s total inability to properly conduct a prompt inquiry into allegations of a child sex ring operating on its own premises. That is utterly ridiculous and, in itself, can surely only be seen as an admission of guilt. Also, recent news indicating even former PMs and chancellors of the exchequer, along with numerous other politicians and high-level bureaucrats, have knowingly been abusing children for years while employed by the government is rather like saying ‘Look! Over here! The government is a bunch of paedophiles!’ Furthermore, as everyone knows, politicians are not the ones with real power and it doesn’t take much imagination to realise how useful, and therefore desirable, compliant pedophile ministers could be to those in charge especially when pushing through unwelcome legislation. After all, they have spent their whole lives lying and not getting caught and therefore make excellent political animals. Compounding these problems, the UK’s famously sexually corrupting  public school system is functioning much like a pervert factory pumping an inexhaustible supply of new nonces straight into British politics every year. I don’t like it either but when you look at all the evidence I’m afraid it becomes rather horribly obvious. We’re living in a ‘Paedocracy’.’

Mr Saint’s views were echoed by all that had researched the thousands of child abuse allegations made against  MPs and other Westminster staff over the past fifty years. Though unfortunately, after thousands of witness statements, masses of corroborating evidence and even several admissions of guilt from certain members of the accused, with not one successful prosecution of a single government paedophile, it seems as though the phrase ‘Paeodocracy’ will be around for some time to come.

21 Sep 2015 – Westminster child sex abuse inquiry ‘split over credibility of witness’ … Monday 21 September 2015 01.00 EDT Last modified on Monday 21 …. was among those involved in a gang of paedophiles and that a girl had died at a …

View all posts by Ethan →
This entry was posted on 1 October, 2015 in homepage and tagged current affairs, Ethan Harrison, politics, satire, Social Comment. Bookmark the permalink.