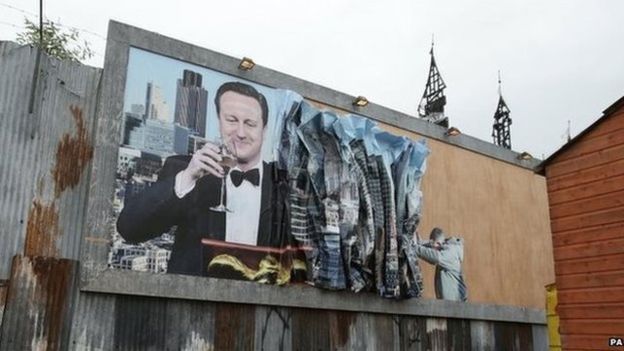 Why does the world need Dismaland? What inspired you to create it – and how did you find the site?
It’s an experiment in offering something less resolved than the average theme park. For some reason it’s been labelled as ‘twisted’ but I’ve never called it that. We just built a family attraction that acknowledges inequality and impending catastrophe. I would argue it’s theme parks which ignore these things that are the twisted ones.

The location was easy to find – I came here every summer for the first 17 years of my life.

This preoccupation with Disney, have you been subjected to too many re-runs of Cinderella recently? What effect do you think Disney has on young minds?
I don’t have an issue with Disney. I’m not a hipster, so I don’t think something is evil or vacuous simply because its popular. The Dismal Land branding isn’t about Disney at all – its just a framework that says – OK, we accept that making art puts us in the light entertainment industry, and we’ll attempt to engage at that level – but for the left.

Some Disney is very good, the Let it Go sequence in Frozen is brilliant – the ‘journey’ between the beginning and end of that three minute song is pure cinematic gold.

What were your criteria for the artists you included? How did you find them? Have you met and spoken to these artists?
I approached all the artists myself by email. Only two of them turned me down.

You’ve described a lot of the work as ‘post-modem’ can you explain what you mean by that?
I came up with the term and now I’m desperately trying to work out what it means. Post-modem is art that has high click potential, that invites being shared between people. This usually requires the art to have at least two parts; ‘embroidery – but into car bonnets’ or ‘a mushroom cloud – that’s also a tree house’. I think the internet puts greater demands on art. You could call it ‘gimmicky’ if you like, but I think that misses the point. We have a new medium for sharing visuals that rewards novelty, insight and humour, but also recognises technical skill in a way modern art has ignored for fifty years.

Also I am interested that this show is on such a grand scale – now your work appears in museums and special Banksy theme parks are you still a Street Artist?
This is not a street art show. It’s modelled on those failed Christmas parks that pop up every December – where they stick some antlers on an Alsatian dog and spray fake snow on a skip. It’s ambitious, but it’s also crap. I think there’s something very poetic and British about all that.

On the list of people whose work you have included in Dismaland is Damien Hirst – if you see yourself as outside the art establishment, why have you included Hirst who is the epitome of the YBA monied art crowd in your show?
I didn’t want to include Damien Hirst, the show doesn’t need his validation or any of the baggage that might come with his name. But when you’re organising an art show at the seaside and you know there’s a sculpture of a beachball hovering on a jet of air above fifty sharpened steak knives – well, you have to include it. That piece is so poetic and technically intriguing. This show is packed with a lot of exciting new artists it would be profoundly depressing if the stand-out artist was Damien Hirst. But you can’t argue with the piece. It’s bigger than what you think of him, or what you think of the art world, or even what he thinks of himself. It’s a perfectly realised piece of work.

Can you expand a bit on what you think we should be telling the next generation about the state of the world… if you were a dad what would you tell your kids about the refugees in the Med? Or the surveillance state – or for that matter, Jeremy Corbyn?
In the remote control boat pond at Dismaland it randomly switches the boat you operate – so you have no control over whether your destiny is to be an asylum seeker or a western super-power.

I feel like my generation was the first to deal with the mass media beaming the world’s problems to us in real time. I remember the baked beans cooling in my mouth as Newsround showed pictures of flies crawling over the faces of African babies. Mostly we’ve chosen to deal with this by cocooning ourselves, that we can live with the guilt. But why should children be immune from the idea that to maintain our standard of living other children have to die trapped in the hulls of boats in the bottom of the Mediterranean? The grown-ups might have convinced themselves small incremental change and buying organic tomatoes is enough, but passing that mindset onto the next generation doesn’t feel like good parenting.

Is Dismaland something you will repeat? Could it become a permanent attraction? Given the huge demand, would you extend the run?
I can’t extend the run because of technical calculations. We have tall structures which have been built and certified for one weather period. It gets windy there and we’re not insured for one minute past the last day of September.

What has been the best thing about opening your Bemusement park, and the worst? I know you expected people to be shocked, but they don’t seem to be… has the reaction been different to what you expected?
There have been teething problems. I didn’t realise that for the first week we had ‘real’ security searching people before they got to the ‘ironic’ security, which obviously blunted the satire a bit. But I’ve learnt you should never underestimate what children are prepared to take on board and respond to. It’s fascinating to see that by not ignoring some more serious issues people find it emboldening rather than depressing.

However the first day I wandered round with the public I have to admit there was no-one more disappointed than me. I think the whole concept might be flawed. By repackaging an art show as an amusement park everybody’s expectations are raised substantially. The branding writes a cheque that the event doesn’t cash. I was there looking at Ben Long’s sculpture of a horse constructed from scaffolding, a piece that if it was shown in the V&A alongside other sculptures would be remarkable, but the lady next to me asked her husband ‘Does it do anything?’ I suddenly realised the whole premise was wrong, I’d pushed it too far and it had gone from being a pretty good art show to a very sub-standard amusement park. I mean, who stands in the Tate looking at a Henry Moore asking – does it do anything?

Why has Jonathan Jones at the Guardian so got it in for you? I’d have thought they would be your natural constituency… how do you respond to his charge that your art is facile and one dimensional?
A lot of critics don’t like this kind of art because it doesn’t require their validation or interpretation. There’s nothing for them to do here.

Fundamentally I disagree with the charge that art is bad if it’s too easy to understand. There’s a place for directness in other art forms – music is full of it, you’d have a hard time telling people they should only listen to Opera and anything else isn’t ‘real’ music. I think there’s space for art to be loud, crass and obvious. If it looks like the rantings of an angry adolescent what’s wrong with that? What was wrong with punk? As far as I’m concerned there are too many things we need to discuss in the actual world before I start making abstract art.

Tell us a bit about the process of making Dismaland, when did you first get the idea? How long have you been down there making things?
It’s been six months for a handful of us. And it’s hard to stay focussed – we spent three weeks carving the foam wheels for Cinderella’s carriage and nobody notices them at all. It took another month getting the remote control boats to float after I overloaded them with people.

Has there been any blowback from Disney?
I think we’re covered by the new laws on parody that were introduced to the UK in October. Twelve months ago it might have been different.

What do you mean by “I am an Imbecile” balloons – is that patronising to your visitors? Do you look down on mass popular culture?
You’d have to ask David Shrigley what those balloons mean – he made them. All I know is I smiled at the thought of a seven year old clutching one on the train as they made their way home.

If you were prime minister what would be the first things you would do?
Abolish inheritance.

What would you like your epitaph to be?
I don’t care about posterity, that’s what i’d like to be remembered for.

Tweet
This entry was posted on 1 October, 2015 in homepage and tagged banksy, Dismaland, Interview. Bookmark the permalink.