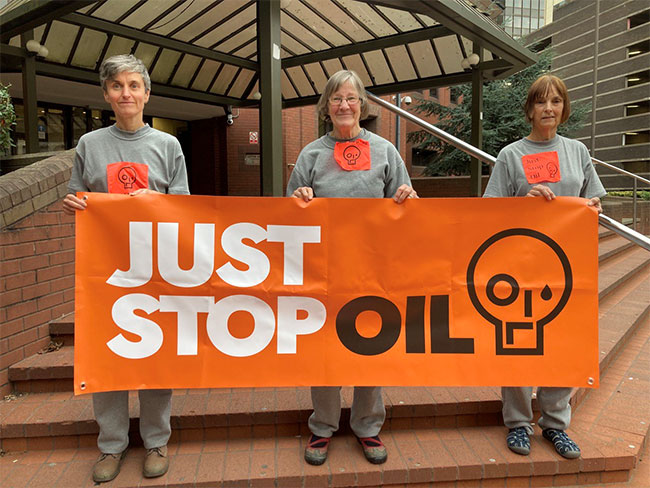 Ruth Jarman of Christian Climate Action was arrested and remanded along with 50 other activists for breaking a civil injunction by blocking access to Kingsbury Oil Terminal with the group Just Stop Oil on September 15. The hearing was in Birmingham Crown Court where she was remanded for 5 days after refusing to accept the authority of the court and received a suspended sentence and costs. Freedom spoke with her to discuss the proceedings and why she holds the court culpable:

Look at the world. The whole system in which we live is failing people and planet, but the law particularly – we were trying to shine a light on the fact that the court system is protecting the oil industry which is destroying life on earth. What’s the point of the law if it doesn’t protect life? It’s failing in its primary duty. I was also happy to go on remand because it’s just another way of telling the truth about the seriousness of [climate change]; that we’re prepared to go to prison for it.

How did you reveal your contempt to the judge?

We used different ways to just say that we don’t accept the authority of the court. So I just said

‘I will not do what the court asks and I will go and break the injunction again’, so the judge had to put me on remand. Other people took their t-shirts off to show words written there such as Just Stop Oil or ‘sham justice kills kids’.

Other people just stood on chairs, or refused to stand. I think we all refused to stand, but [the judge] didn’t care about that. In that situation you’re meant to simply say your name and say whether you accept it or not but we all said more than that.

Why was it important for you to carry on the protest within the courtroom?

It’s because we know the government’s failing us, we know business is failing us, the courts have a choice whether to carry on in a blinkered way, ignoring the big picture that the world’s going to hell in a handcart and just do their job, or whether they’re going to stand up to the government and businesses and say this isn’t right, there’s a higher law here. We were trying to encourage the courts to think beyond their blinkered remit and be part of the solution rather than part of the problem.

This action was against the oil industry, but it was also against the injunction that was meant to streamline the flow of oil, and against the courts that have yet again revealed their purpose within a system that is built to concentrate wealth and maintain the existing structure.

Ruth Jarman, mother of three, was in court this week as she was arrested for blocking Kingsbury Oil Terminal. Below is her court mitigation statement…

It has been a privilege to meet some of the women at Foston Hall. But it has made me sad and angry at the dysfunctionality of our society that puts kind, caring people behind bars while those allowing, subsidising and profiting from new oil and gas, people who are knowingly participating in the decimation of life on earth, are living in freedom and luxury.

As a Christian I believe that I must try to bear responsibly the image of God within me. How do we do that when, as the head of the UN has said, ‘we are firmly on track towards an unlivable world’?

How do we live responsibly when this government and the law is subsidising and protecting the companies who are in the business of destroying life on earth?

The International Energy Agency said there should be no new fossil fuel developments after last year. Our government plans to licence between 40 and 130 new oil and gas fields, knowingly facilitating civilisation, ecological and climate breakdown.

What is the right way to respond to this? To write to my MP as if a billion lives were a pothole in the road?

I think you need to know that I have tried everything else.

Since I first heard about tipping points when pregnant with my first child, who is now 22, I have pretty-much dedicated my life to campaigning on climate. I started a community solar scheme in my village, I co-founded a national Christian climate charity, I have stood for election, marched in the wind and the rain, spoken to hundreds of people, trying to get the message out about the climate and ecological emergency. My family life has suffered because of my obsession with trying to live in a way that does not damage what I believe to be God’s creation.

A crime is taking place here. And the respectable thing to do seems to be to walk by on the other side of the road.

Physically blocking Kingsbury and breaking the injunction was my way of not being a bystander to this man-slaughter version of genocide. I cannot apologise for this.

I have no immediate plans to break the injunction again, but cannot promise never to do so.

Tweet
This entry was posted on 30 September, 2022 in homepage and tagged Just stop oil. Bookmark the permalink.