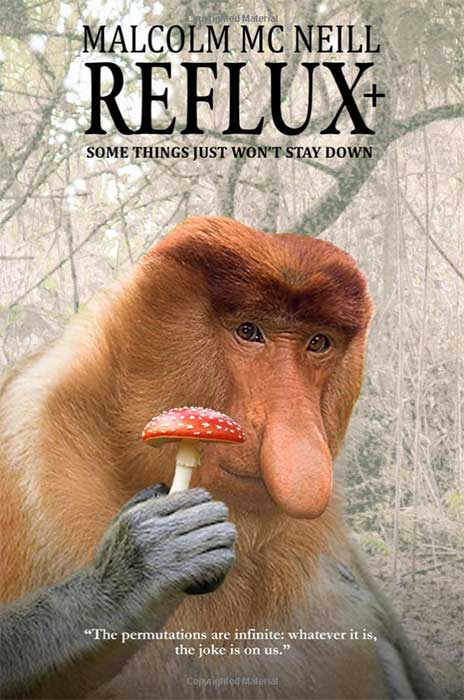 An appreciation of REFLUX+ by Malcolm McNeill (Apophenia Books, 2018)

If the course of all knowledge can indeed be symbolised by that of a tree growing in either Eden, Arden, or somewhere else along the road to hell and/or oblivion, then it is safe to assume that the mighty Malcolm McNeill is currently placed astride or beside it, artfully siphoning the life affirming sap, while eschewing and casting off the more malignant branches into the enveloping soil, while simultaneously pissing at its roots like the revenge fuelled horses of Equus, awaiting their deathly stampede. This collection of think pieces, essays and reviews on everything from the BBC’stelevisation of the Tudor dynasty to the 17 year life cycle of the Cicada is a rip roaring ride through culture, conjecture , history and  practise that will test the flesh of any prospective rider.

McNeill is a one man age of renaissance, from his work as political cartoonist for The New York Times, to his multifarious writings, to his collaboration with William Burroughs as the graphic artist, for one of the great lost books of this or any age, Ah Pook Is Here, and that experience and expertise rivers through this waterfall of words like its own force of nature; a perfectly reasoned stream of rationale that is flowing beneath the aimless chaos of the world we have made, the very same one that we are now carelessly picking apart.

Like any true poet or polemicist, each piece opens with a killer line:

Scientists now suggest they  know how much the earth weighs. What does this mean?

Or, my own favourite:

The first time I saw Mrs Smith, she was lying next to me on the side of a bus…

These priceless epithets are timeless one liners, often imbued with the power of an aphorism and the resonance of what we might call ‘true’ poetry. They are artful encapsulations of the arguments they prefigure, the launchpads for the ignition of a fiery perception, aimed at the dust in your head.

In slicing away at the means with which culture and the world is processed – as he does so effortlessly in all these pieces – McNeill is doing so much more than your run of the mill reviewer, or unsettled essayist, as he is not primarily concerned with the delivery or posting of mere opinion, as much as he is with a changing, or resetting, or recharging of the dynamic of sensibility, taste and intelligence. He wants a new language and fresh means of discourse, and by writing in this way, with a coruscating mixture of humour and wisdom, he sets out the methodology others, should they be brave enough to do so, can adopt, adapt and  follow.

AN ANT, suitably one of the smallest entries in the book, is a perfect piece of pocket philosophy:

I watched an ant stumbling across the hairs on my arm, a scene as remote as a leaf falling from a tree in China.. by brushing it away, I’d still be left with the arm.. with its impenetrable jungle of hairs, each one…utterly, fundamentally incomprehensible. .

S.E.T.I. in which visiting Aliens enquire of a reigning President as to the identity of the most revered and indentifiable earthling and are met with the undeniable name Muhammed Ali, is a marvellous token of truth, when we realise how closely Ali echoed all of humanity’s great achievements from culture and intelligence to physical beauty and skill. This is effortlessly balanced by the jokism of TROY’s ingenious Peter O Toole infused Roundel, and the deeply felt concerns blazing through CLIMATE’s study of the dangers of Amercian weather, in one eye, the impetus for supposed lifestyle perfection, while in another’s mouth the cause of so much crop failure and rural poverty. As one reads on there is simply no end to the dharma fuelled revivification of honour, celebration and indeed accusation against those McNeill sees as guilty for wrecking or soiling the feast.

In taking his trash bins out one morning, McNeill inadvertently chops off the tail of a sleeping lizard and what Mike Nesmith might call the ‘propinquity’of this act sends the author into a wondrous examination of hands as the tools for survival and change.

The forty pieces of this book each contain words that as Harold Pinter once said in an early essay on Shakespeare, ‘successfully people the wound.’ What that wound is, and how deep it goes is something none of us can effectively judge, but the fact that society is not totally comprised of fallen and amputated appendages  remains something to be continually marvelled at.

Another issue that springs from this collection is the sheer range of McNeill’s interest and curiosity. From a study of Tarzan to a beautiful conjecture on the whereabouts of Atlantis, there is nothing here not worth considering. McNeill’s mind polishes our own through his writing, which remains as accessible as it is entertaining and phrases glisten through like daylight on rushing water;

This motherless God of the bible clearly has little respect for womankind.

If nothing went wrong in Eden, then nothing could go right there either…

Black holes, big bangs and things getting sucked in and out are terms one might attribute to the daydreams  of teenage boys who don’t get out enough…

Each observation rings clearer than the Church fed bell or the alarm clock on every bedside table.  It matters that McNeill has this much to say. Having worked closely with many of the great above and below counter culturalists of the former century, who have still not been equalled or replaced  such as Burroughs, and Heathcote W, Malcolm M is what Wallace Shawn might deem a ‘Designated Mourner,’ the title of his seminal play of the late 1990’s,detailing the somewhat rueful continuance of a faded standard, whose colours, despite the manner of their description are still able to transmit through the murk. Unlike Shawn’s boorish protagonist therein, who seems content to warp and ruffle his own thinly achieved middlebrow, McNeill’s hairs bristle, whether they are to be found on his arm as the ant is brushed away, his head, in his ear, or up his nose, each cat-like antennae is primed to receive divine signal and master the muses we miss. As the man states:

The road to hell is paved with good intention. It doesn’t get hotter than that.

And how right he is, as ideas and perception only really catch fire when the correct person is fanning the flames. Anyone can keep a barbeque, bonfire or witch hunt going, but it takes a McNeill – and the members of his family aside, I do not see so many forthcoming  – who are both phoenix and dove all at once. In THE WONDER OF ATLANTIS, my personal favourite, McNeillacknowledges how the curious accomplishments of Mayan, Eqyptian and therefore Sumerian society were so well defined and in many ways in so far in advance of our own, as to seem almost impossible. And yet he still wonders as to ‘who actually did the work?’ If those innovations were the product of some God granted providence, or the result of an outré, or alien technology, then just how far back can the beginnings of civilisation really be charted? Have we in fact already evolved to the full extent of the means we have and can engage with, or are capable of in relation to the surrounding planet? If that is so, then can we now be seen,star stung and overloaded as we are, to have fallen, or even collapsed back into a more comfortable and nullifying  state of ignorance? This piece  set my own mind spinning and the entire book therefore becomes a great begetter of other ideas and books, as indeed, all the best books should. As a reader and reviewer, I start to imagine a future that is in itself a black hole to the sky shredding burn of the distant past. It is hard enough for me to make a kitchen cabinet, so just how exactly did those pyramids rise?

Books are parents of course to all of those who need leading. And REFLUX+ parents, more than many others I’ve read. It allows me to be and in a matter of days has become a friend and companion. Its clarity stirs me as much as its inherent interest infects.

It was William Seward Burroughs of course who deemed language a virus. If that’s the case then you should gladly catch your death here, as the Reflux McNeill gives you is of more use than a mirror, as in looking through it you will see the magic that would connect eager minds.

McNeill has seen all and worked both in and out of the system. He cuts through all the dead wood to make a paper shaped tree in your hand.

In the think piece A SHRIMP, McNeill writes of the discovery of sulphur breathing shrimps living two miles below the surface of the Atlantic ocean, a form of life comparable to the waters found on Saturn’s Moons. These discoveries emphasise the scale of both the arrogance of our current existence and how we express it, as well as its hosted ignorance, along with the falsity and indeed shallowness of our assumptions and generally accepted conclusions.

‘How much more is there to come?’ he so reasonably asks, and therefore, how much are we actually equipped to contend with? How much further along the roads of disenchantment and disillusion are we prepared to actually go? With our cultural blinkers on, and our moral compasses fucked by the cheap magnetism of celebrity and our political systems rushing to collide like OJ on the freeway our blindness is a virtual blister on light. And the piece concludes accordingly:

As the camera tumbles on into the reaches of infinity, a shrimp in the darkness decides whether to turn left or right.

McNeill in the words and the ingenious and original illustrations scattered and weeding throughout this invaluable field of pages, is revealed not just as the provider of choice cuts from the butcher’s block, or the woodcutter chipping away in order to resculpt the tree of knowledge into a more effective form, but also as the rightful heir to the creeds and cadences vital for the elevation of language.  The fact that we fall for the relative charlatanism of Deepak Chopra, The Maharishi, Charles Mansun, or for that matter, Putin, Johnson and Trump is the reason why we need felling. But in hitting the bitter soil of that still soundless forest, we need not worry, for Malcolm McNeill will cut only when he needs to, and will do so in order to provoke the correct form of growth and renewal. As well as saw and axe, he has about  him shovel, water and hoe. He works on as we read and weed. New flowers will bloom and richer earth be turned o’er. Fresh words heard in rainfall will teach us all how to  grow.

The lesson has begun.

With the reflux exposed, the reflex must take over.

All we need do is listen. 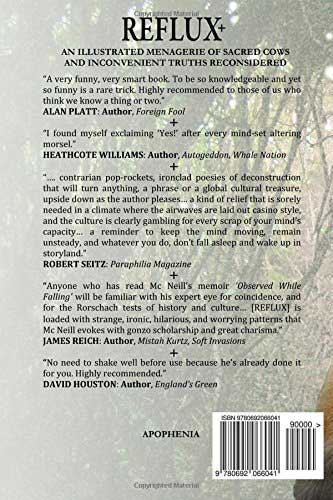 View all posts by David →
This entry was posted on 6 June, 2018 in homepage and tagged David Erdos, KING OF CUTS, Malcolm McNeill, Reflux. Bookmark the permalink.