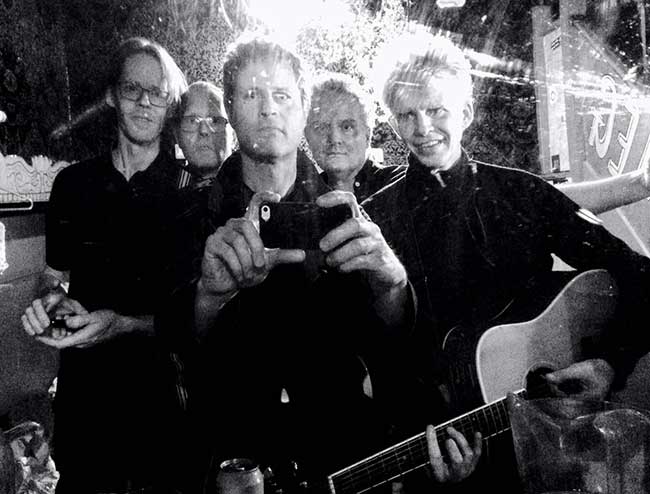 What are bands for? To show a brotherhood of souls celebrated,

Men of a certain age showing simply the patterns within their own hearts,

And so it proves at The Lexington, London with Joss Cope and his cohorts,

To serenade and to master both the night air around them

And a receptive crowd eager to each in turn play their part.

With Richard Bentley on bass, Mark Shaw on lead, and Simon Dye

On the keyboards, Ean Ravencroft’s stately drumming leads the strumming

Cope into song; they merge, a tested unit, at once, as there is nothing loose here;

To which everyone there can belong. Learn to Float sashays in with its Bowie Blue Jean

Style vocal shimmer, its perfect pop underlining the kind of fight we all face,

Leave  a stark trace. ‘Realise we’re all slowly sinking’ he sings and you can appreciate

Kept inside. And yet with these musical compadres at hand, the song’s jauntiness

Still assists us, the act of positive thinking and singing is at least an audible way

To survive.  She’s Gonna Change Your World serenades, but is she the past

Or a woman? Both are detected as this passion fuelled tale is revealed.

Combine deftly a resonance all should feel. This group are not kids

And seeing them play, it feels noble. Their ease of performance

And sure fired skill holds great charm. They do not pretend with these songs.

Delivery is part of the message. Learn from the tales in their telling

And protest, though gentle can still exert full alarm.

Scales Falling cries through the notes as Bentley, Dye and Shaw forge emotion.

Ravenscroft serves the sweet feeling with his rhythmic array and control.

As the silence surrendered after the losing of the only one you would hold.

‘She’s not what you think about her’, he sings and we can hear separation.

The upsurge of the chorus is indie song craft keeping score. 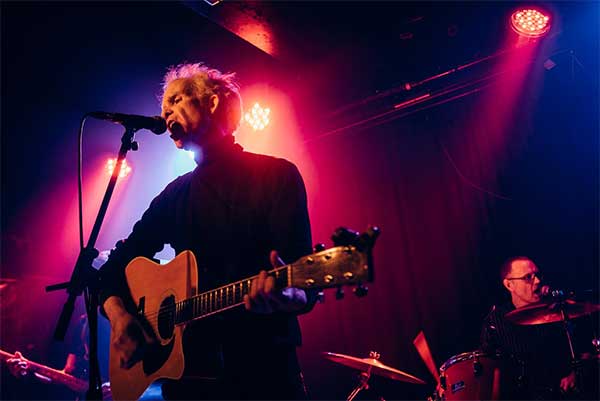 One can hear forty years of musical changes, from The Beatles, Byrds,

And The Monkees, through the Lotus Eaters, all the way up to the angels

As the band campaign for ascension in variations of conventional 4/4 time.

Nobody knows This is Everywhere Brexits through, full of shades of Nick Lowe

And Costello. There is a taint of The House of Love and The Triffids rising like scent

From each sound. A touch of The Stone Roses too, unfurled on an increasingly

Inspiralled Carpet as Cope’s invocation to ‘Step outside and see whats really there..’

Grows profound.  A Guy Like Me, is the gem that sets the evening’s sights into focus.

It is a song made for the charts, if only the proper charts still existed,

With its superbly phrased statement economically dressed in slim jeans.

It is a stammer and strut,a  defying cry for the  sage ones, who have turned

Each dark corner and pulled down their shades to sunlight. One can hear the speedway

Ahead, as well as the lawnmower, rattling. One can see the leather jacket, the brylcream,

Captured in sound, through insight. So, here is knowledge and pop,

And knowledgeable pop through the ages, in a relatively short set,

All music that has passed the test is conveyed. Buoyancy and regret.

In a finely wrought form these friends made. Your Broken Heart Is Not For Sale

Closes all,played by a band who know song craft . Shepherding this most accomplished

Of albums across the wilderness we’re now in.  We have been played something here

That moves beyond entertainment, as there is also instruction

Of how to survive and begin, whatever we need to conquer those

Who oppose us. We are the masters, monarchs of the lost, who’d be found

Who would burn us. As Joss Cope now teaches; ‘ Behind the lines of laughter/

Lies the frown/Upon the face of he who wears the crown..’

Bands are Preachers. But unlike God’s, they’re the swimmers in a sea

Of constant change who can’t drown.  Listen to the record and learn

Just what it is to breathe sweetly, even in a bitter time

There are echoes of salvations to come, within sound. 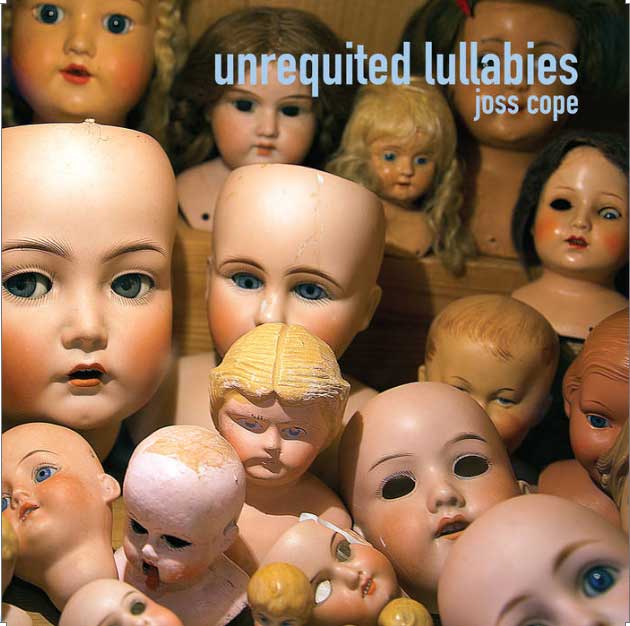 herbert_sherbet Having been a fan of Julian’s for the last 35 years I’m happy to support Cope the younger !!!!!
“Learn To Float”, “Turned Out Nice Again” and “Nobody Knows This Is Everywhere” are thee stand out tracks for me. Although, with regards to “Nobody Knows…” I was expecting a cover version of the old Teardrop Explodes demo of the same title!!!
A good album n hope it does well for Joss.
Big up to the brothers Cope !!!!! Favorite track: Nobody Knows This Is Everywhere.

“A riot of jangling guitars, Psych Pop smarts, fuzz freak outs and off the wall psychedelia that, along with more current influences, channels Kevin Ayers and the “Canterbury Scene” possibly more than Syd Barrett and the hip London bands from the Sixties. It’s a wonderful record.” – Thee Psychedelicatessen

“A superb solo album…if you like the intelligent pastoral Psych of acts such as XTC, Robyn Hitchcock, The Blue Aeroplanes and Stephen Duffy then I can certainly recommend this.” – Retroman Blog

Born in the Midlands at the start of the swinging 60s, Joss Cope followed elder brother Julian to Liverpool aged 14 and got rapidly sucked in to the nascent post-punk scene there, meeting and playing with such future musical luminaries as Les Pattinson (Echo & the Bunnymen), Peter Wylie (Wah Heat) and Mike Mooney (Spiritualized).

He would go on to form the short-lived but influential Freight Train with Donald Ross Skinner and Barrett Douce, releasing the seminal debut album Man’s Laughter on Phil Smee’s Bam Caruso label in 1985. After Freight Train split when Douce joined the rival Mighty Lemon Drops, Cope moved to London and became part of the emerging Creation Records scene, playing with Crash…  more

View all posts by David →
This entry was posted on 11 January, 2019 in homepage and tagged David Erdos, Joss Cope. Bookmark the permalink.