Lest It Be Forgot 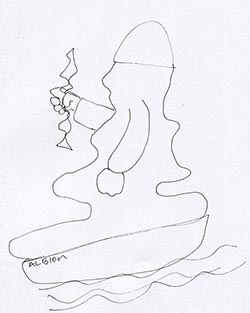 It is 1967 and Smith, a precocious fellow, has been journeying around and now finds himself stranded penniless on the island of Fernando Poo just off the coast of West Africa. He has been told by some seamen to go to the local shipping office for a job as deck-hand saying that he has been discharged from a Nigerian ship for political reasons.

At the office, a corrugated iron shed, he finds a young Scandinavian with a brisk manner who sits behind a desk and listens doubtfully to his story.
‘Vat ship?’ he barks, and Smith is taken momentarily aback; he had not thought of this. He knows however, that there must be no hesitation here, and a name slips smoothly from his tongue; the first to come into his head. It is a name full of significance in his inner cosmology, which over the past year or so has accommodated several dramatic inclusions.

The notion of “Flower Power” and its associated messages arising in the streets around San Francisco’s Height Ashbury and nourished by the balmy air of California, had travelled like wildfire across the Atlantic to evoke a similar response among London’s young crop of bohemians, social radicals and other more quirky dissidents. The ancient shamanistic lore of the North American Indian mingling with the Maharishi glow of eastern metaphysics, while above all the Woody Guthriesque voice of Bob Dylan singing of meanings far beyond the grasp of poor old “Mr Jones”, and setting the arms manufacturers quaking in their boots with his “Masters of War.”

However, although generating a powerful influence, these American dreams arrived to encounter some equally powerful myths of the home-grown variety. Indelibly grounded in the bedrock of the sceptred isle, and triggered by this new infusion of freedom’s ideals, these mythical figures had arisen to inspire a new and somewhat more Celtic philosophy.

Out of the hoary past and mists of fable a round table had emerged, and there sat King Arthur and his court of valiant knights. Great Merlin stood upon a hill with arms outstretched, bestowing the King’s good will upon the green and pleasant land below. And later, Blake, to prophecy the New Jerusalem and send a clarion call for giant Albion to awaken from his centuries long sleep; rise bodily up from that English landscape in which he has lain hidden for so long, and with one mighty arm drive the money-changers from the temple, and with the other smite those dark satanic mills to dust.

The old straight tracks and ley-lines; stone circles primed with energy and star alignments, still generating their mystic fascination to those who measure with the ancient yard and pay a Druid’s homage across the Salisbury plain to Stonehenge. The Chartists too their mark had left upon the island’s psyche, and Tom Paine’s call for common-sense still echoed through old England’s bones.

From this maelstrom of native exotica Smith has cobbled together his own inner cosmology which he is always happy to invoke, and now at the agent’s question, ‘Vat ship?’ he turns to this ghostly pantheon of hippie ideals; speaks the first name that comes to head, and…