Madness at the Eden Project 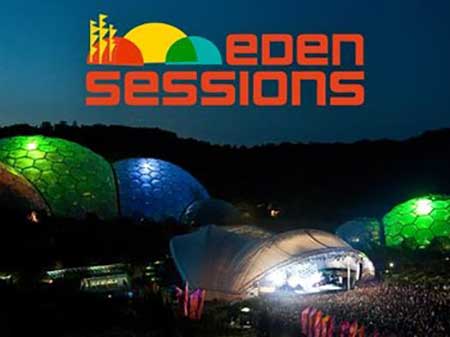 On a sunny evening you can’t beat Cornwall’s Eden Project as a concert venue. Its sci-fi domed greenhouses nestle into  a disused quarry that is now lush and green, the 5,000 or so audience feels just right, and there’s a whole festival vibe going on. Even if food and drink could be more reasonably priced, the queues are mercifully short and the service swift and friendly.

In the centre of the site a canvas tent bubbles around the stage, echoing the permanent domes, with an arena gently sloping away with great sightlines and access. There’s a relaxed viewing zone for those who need a bit more space or to sit, and a disabled viewing platform offering the best seats in the house.

At 9pm prompt Madness come on stage to cheers from all the tribes present: the rude girls, the porkpie hat boys, the coloured wig gentlemen, the plastic saxophonists, the two-tone pensioners, the fez brigade, a scattering of kids, the local hippies, and Joe Public. It’s straight in to a couple of the band’s greatest hits, and if the sound is a bit murky it doesn’t matter, everyone is in a party mood, everyone is swaying and singing along. Madness have us eating out of their hands. It’s going to be a great night.

And it is a great night, but Madness want to make it clear they are a band of the present, with a recent, ‘number one in America’ album. They don’t care if we don’t know the songs or not, they are going to play them to us. So we get to meet the deviant Mr Apples – who wants to bring back the birch, a shotgun-toting girlfriend’s father and other quirky characters, often with brilliant accompanying videos, and listen to the clever sarcastic politics of ‘Mumbo Jumbo’, a dig at every silver-tongued liar around.

At times they almost lose the crowd, but they always reign it back in with a couple of their big hits. It’s clear that if Suggs isn’t the greatest singer ever (and the bass-heavy mix really doesn’t help) he is a bloody clever wordsmith and lyricist – the news songs especially make that crystal clear, and I will be tracking down a copy of Can’t Touch Us Now very soon. And the band are hot, scorching in fact, with great sax and brass, wacky keyboards, and – when required – an amazing electric guitarist.

I kind of felt sorry for the band, caught between demands for the greatest hits of 30 years ago, and their desire to share their clever and interesting new songs, but they just about pulled it off, before giving in to nostalgic mayhem for the closing three numbers – including a great version of ‘House of Fun’, and encore. I’ve never seen Madness before, but I hope I will again. After I’ve listened to the new album a bit more. These guys are more than a nostalgia trip, but they sure do know how to party, they really do go ‘one step beyond’….

View all posts by Rupert →
This entry was posted on 21 June, 2017 in homepage and tagged Rupert Loydell. Bookmark the permalink.