Posted on 3 December, 2022 by Lawrence Freiesleben 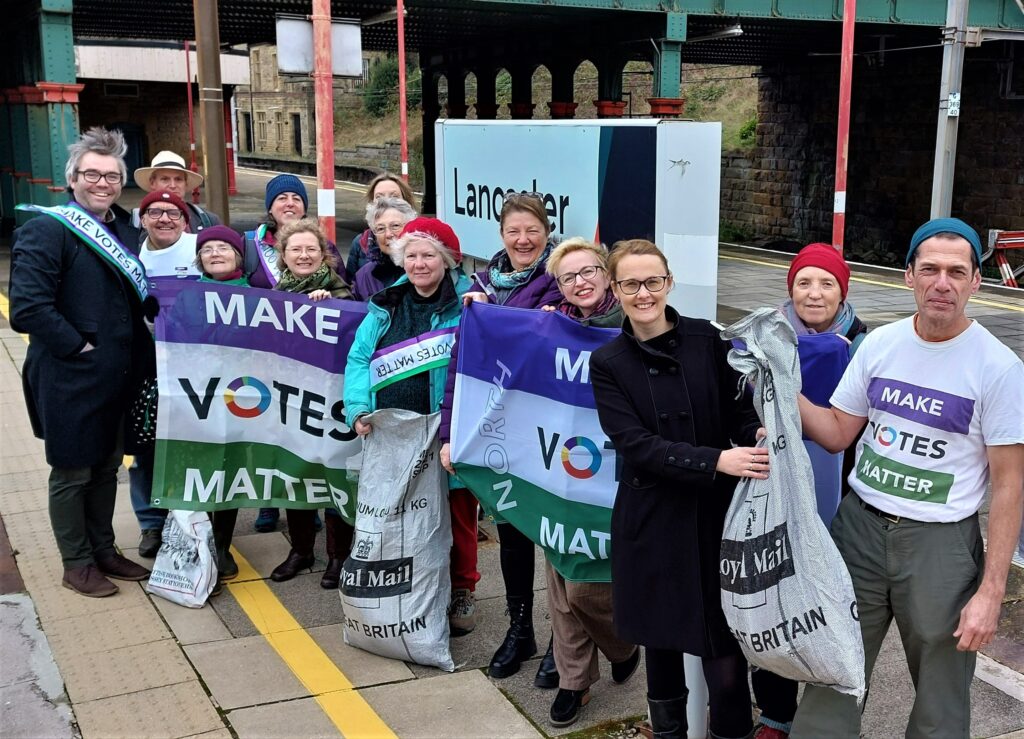 Back with Make Votes Matter[ii] campaigners during the last week, I was glad to be able to attend two of their three local postcard handovers. Being a cross-party organisation, MVM will accept the support of any politicians keen to implement Proportional Representation in the UK – so I must stress that the anti-Tory stance of this report is mine alone.

MVM have been busy with Operation Postcard[iii] for the past few months, distributing their postcards to supporters old and new. On each card there is space for the sender to write why they want a system in which everybody’s vote has a chance to count – why they want a true democracy in other words. The distribution, collection and sorting of these postal messages must have been hard work, especially considering that many of those circulated during the holiday season were destined for MPs in every part of the country.

In North Lancashire and South Lakes, MVM concentrated on three MPs: Cat Smith, Labour MP for Lancaster and Fleetwood since 2015, Tim Farron, Liberal Democrat MP for Westmorland and Lonsdale since 2005, and David Morris, Conservative MP for Morecambe and Lunesdale for far too long.

The meeting with Cat Smith (shown at the top) took place in an icy wind on Lancaster railway station, and with train times to consider, was enthusiastic and friendly yet efficient. 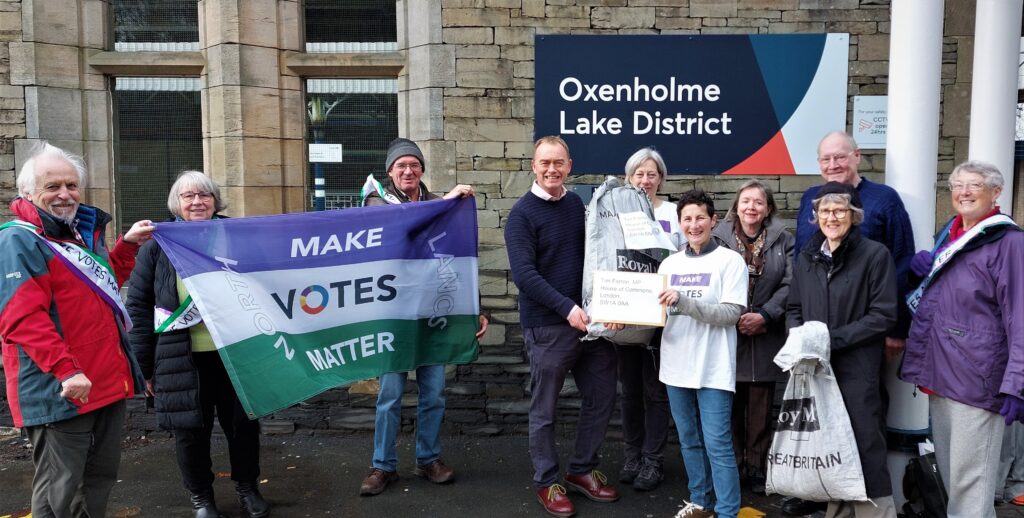 The weather was kinder to the meeting with Tim Farron at Oxenholme station. A local organiser, told me that ‘It had a good feel to it.’ She went on to add: ‘A few passengers stopped to chat to us and took leaflets. Even a member of staff came to see what we were doing, engaged in the discussion, and took a leaflet. Which was nice.’

Tim Farron has long been in favour of Proportional Representation and gave the following press release: ‘Our out-of-date and unfair voting system is part of the reason many people are disengaged with politics – they feel like their vote doesn’t matter. That’s why I’m proud to back the Make Votes Matter campaign and will continue to argue in Parliament in favour of the UK having a proportional representation. This week, in fact, I am putting down an amendment to the Government’s Levelling Up Bill to give local councils the power to adopt PR for local elections.’

David Morris, Conservative MP for Morecambe and Lunesdale is a different kettle of fish altogether:

A request from MVM for a meeting to hand over the cards addressed to him, was curtly brushed off, Morris saying we could post the cards to him. As another Conservative MP has labelled MVM as ‘an unruly, intimidating mob’ (!!) perhaps Morris was nervous? 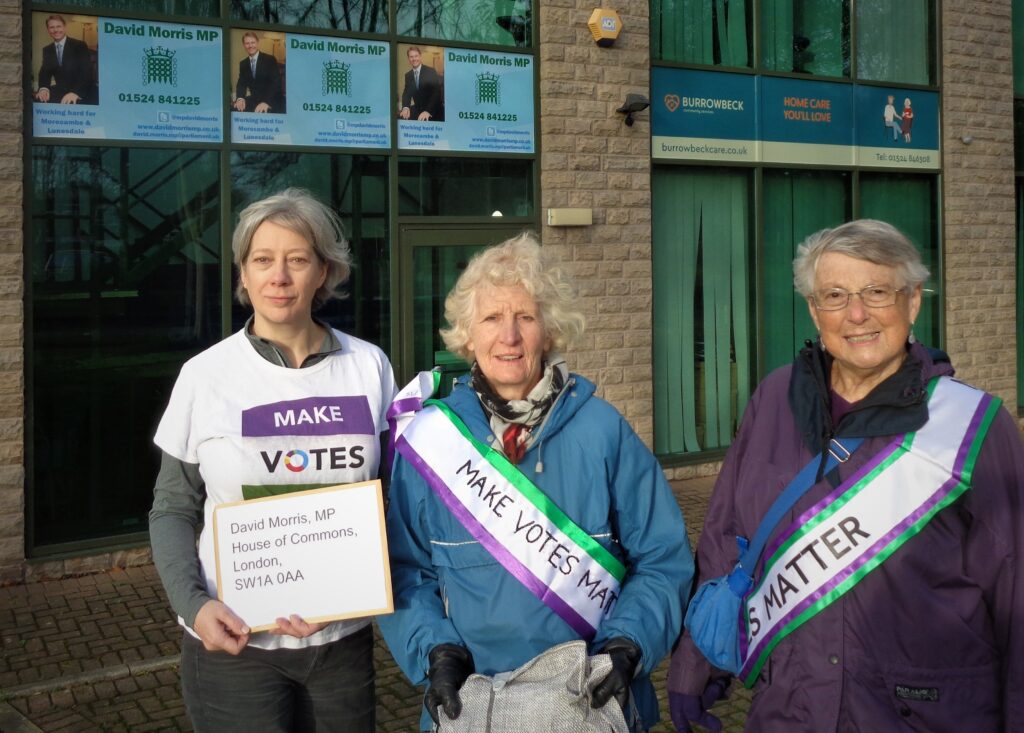 It was decided instead that the postcards should be delivered direct to his office at Riverway House on the edge of Lancaster. There, a meeting with two women in the foyer of the building where the ex-musician and hairdressing salon owner maintains a vacuous front, proved instructive. It transpired that one of the women had written to Morris – her local parliamentary representative – via Facebook, asking him when he was going to look into the fact of hungry children in his constituency[iv] . . . and found herself promptly blocked for her pains. This practice of blocking anyone who asks unfavourable questions has become so common that there is even a Facebook group named Blocked by David Morris. With 1,400 members[v] and rising, this is worth noting even if you are not a constituent. The tagline of the header: ‘Out of Touch with Reality, He Made his Own’, is sadly all too accurate, not only of Morris but of too many MPs across the political spectrum. 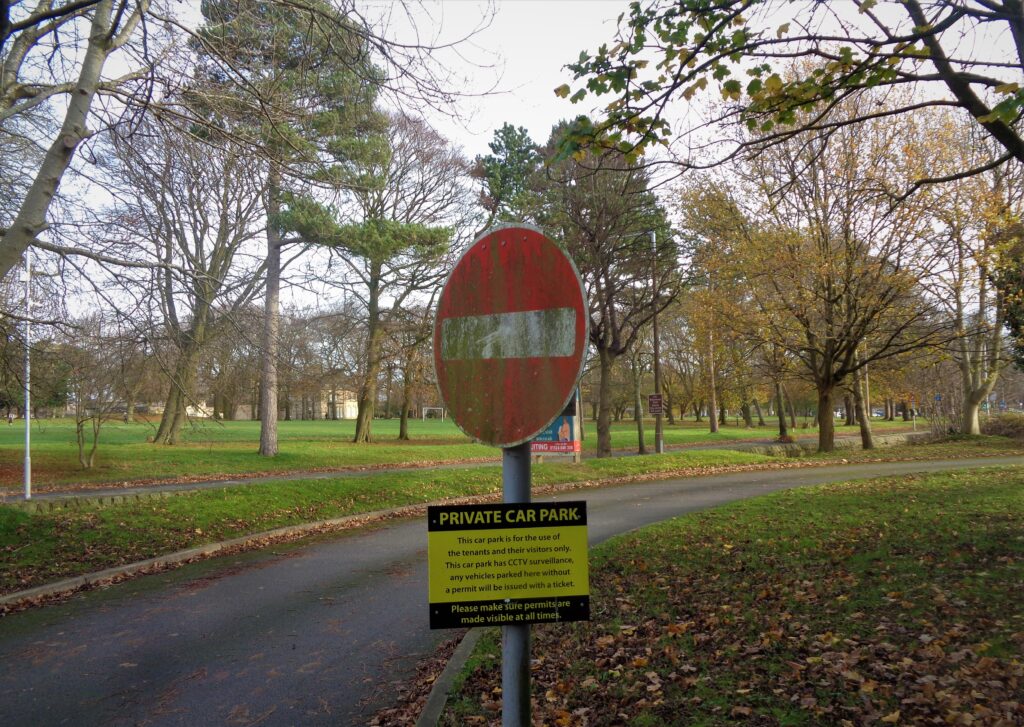 The rustic yet faintly sinister environs of Riverway House . . . with undertones of Fahrenheit 451[vi]

Earlier on the occasionally sunshiny morning of the 26th, I was disappointed when my ailing camera failed to open fast enough to capture the image of an ambulance passing Morrisman’s oft-vacant office on the Morecambe Road. Just a glance at Riverway House’s southerly façade reveals that the signwriter has made a serious mistake: accidentally putting the word prosperity where the word past should be: 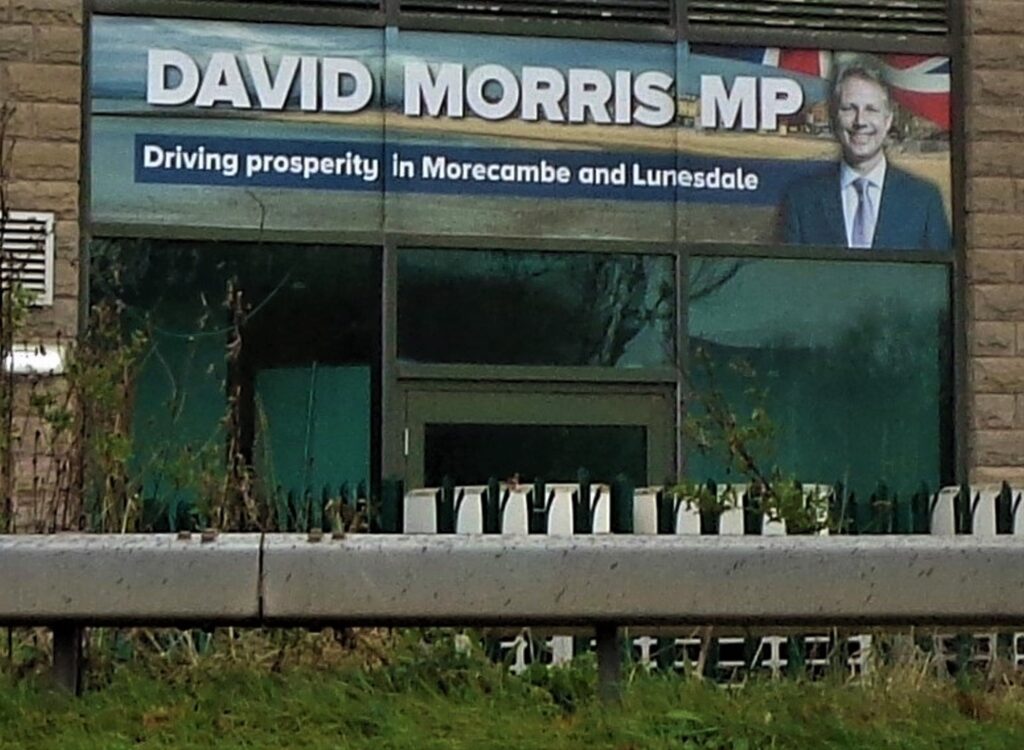 David Morris MP: Driving past in Morecambe and Lunesdale

In fact, my caption above is somewhat charitable. In reality, grinning David blocked-by Morris would be unlikely even to be driving by. In reality, he tries to avoid not only the poorer parts of his constituency but any and every awkward question relating thereof.

When all the diligent groups working towards Proportional Representation in the UK – Make Votes Matter, Compass, The Electoral Reform Society and so on – finally succeed, hopefully only those MPs who genuinely care not just about their constituents, but about our social and natural environment also, will be allowed to remain in power for long.

[i] I don’t approve of so called emojis (?) at all but in reference to David Morris felt that such ironically applied shorthand was sickeningly appropriate.

[iv] This item may be three years old, but things have only got worse since: www.bbc.co.uk/news/uk-england-lancashire-46827360

View all posts by Lawrence →
This entry was posted on 3 December, 2022 in homepage and tagged Lawrence Freiesleben. Bookmark the permalink.

One Response to Make Votes Matter